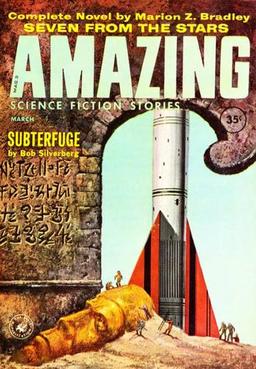 The cover is by Albert Nuetzell, showing a spaceship and some people investigating an archaeological site, presumably on another planet, complete with strange writing and an enormous stone humanoid head (click on the image at left for a bigger version). It doesn’t go with any of the stories in the magazine. Interior illustrations are by Mel Varga and by Virgil Finlay.

The letters in “Or So You Say …” come from Jacqueline Brice, Jess Nash, Bob Adolfsen, Paul H. Taylor, Frank H. Terrell, and Dr. Raymond Wallace, none of those names familiar to me. The biggest common theme is praise for Alan Nourse’s novel Star Surgeon.

Seven from the Stars, by Marion Zimmer Bradley (42,800 words) 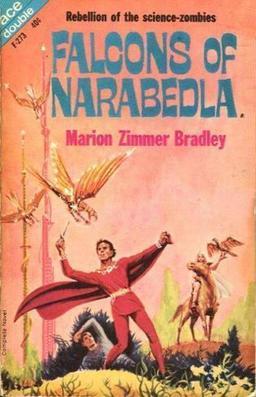 Marion Zimmer Bradley was probably one of those writers who worked best at length. She published a number of short stories early in her career, but even at the beginning, her first stories to gather any notice were a couple of novellas, “Centaurus Changeling” and “The Climbing Wave,” in F&SF in 1954/1955. Her first novel, Falcons of Narabedla, appeared complete in Other Worlds in 1957, and her second (The Planet Savers, genesis of the Darkover series) in Amazing in 1958.

“Seven from the Stars,” then, is not a Darkover story, though it shows some points of connection, particularly the fascination with telepathy. It opens with a Dvaneth spaceship crashlanding on a Closed Planet, which we quickly realize is Earth. The Dvaneth are fully human, with a strong disposition towards telepathy or telempathy, and they have an advanced interstellar society. But they steer clear of any planet under threat by the mysterious transdimensional race called the Rhu’inn (Bradley really had a knack for stupid names), leaving only a couple of “Watchers” on such planets.

The seven survivors of the crash, thus, must resign themselves to a life on backward Earth. Soon the group, reluctantly led by a young man called Reidel, are doing migrant ranch work, posing as illegal aliens (from Mexico, not Dvaneth!) Reidel is falling for the aristocratic telepath in the group, Cleta, while clashing at times with a young hothead (Arran) as well as with the bitter telempath Mathis. They have been noticed by a local ranchhand, Ned Marcus, whose boss is, coincidentally, a saucer nut, and all this brings them to the attention of Clint Landon, the Dvaneth Watcher based in New York. 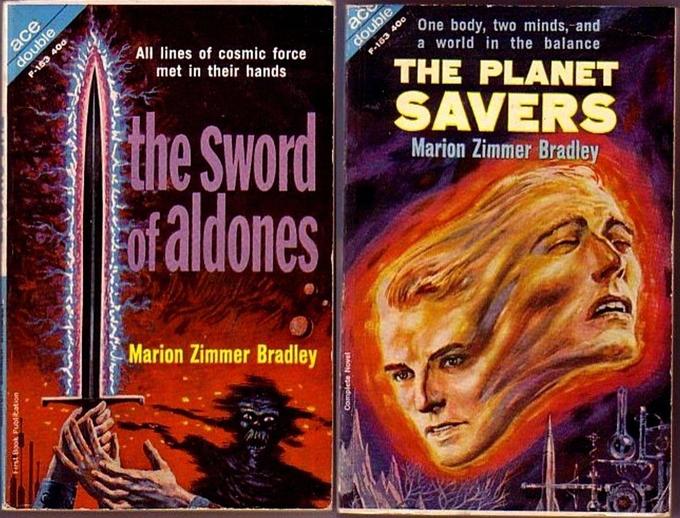 The rest of the story follows Landon’s desperate attempt to find the group of survivors, especially once he realizes there are signs of Rhu’inn activity. He is soon forced into risking revealing his true (alien) identity, and possibly to revealing enough of Galactic society to allow Earth to build a protection against the Rhu’inn. Meanwhile Reidel and his group stumble into trouble with the local authorities, and end up confused over whether they need Landon’s help or need to avoid him… all as Reidel’s grip on the group is challenged again and again.

It’s kind of enjoyable in a somewhat disappointing fashion… there are hints of pretty cool stuff in the background, such as perhaps that Atlantis was a Dvaneth planet ruined by a Rhu’inn intrusion (see how that name works?)  Similarly, Bradley really fumbles the couple of love stories that form part of the plot – neither of them quite works, both could have been nice. Part of the problem is the length – the novel could have used expansion by about 10,000 words. I’m not sure if the eventual book version (it was published as an Ace Double, backed with Keith Laumer’s Worlds of the Imperium, in 1962) was expanded, though I doubt it.

Robert Silverberg’s “Subterfuge” is about a Neopuritanical missionary named Mather Sullin. After a number of successful missions to variously sinful planets he is sent to Gamma Crucis IX, which will be a real challenge – three previous missionaries have utterly failed. It seems that on this planet sin is mandatory. Sullin eventually hits on a “subterfuge” – he will portray himself as a regular sinner, and after gaining the locals’ trust, he’ll promote the Gospel… in the process, he is introduced to the delights of alcohol and of concubines… Well, you can see where this is going. Minor work, effectively executed as one expects from Silverberg, but never surprising. (And a bit clichéd in its presentation of Puritanism – one might note, for example, that the American Puritan settlers called the taverns they established “gifts from God” –the standard image of the Puritans is not precisely in line with the true history.) 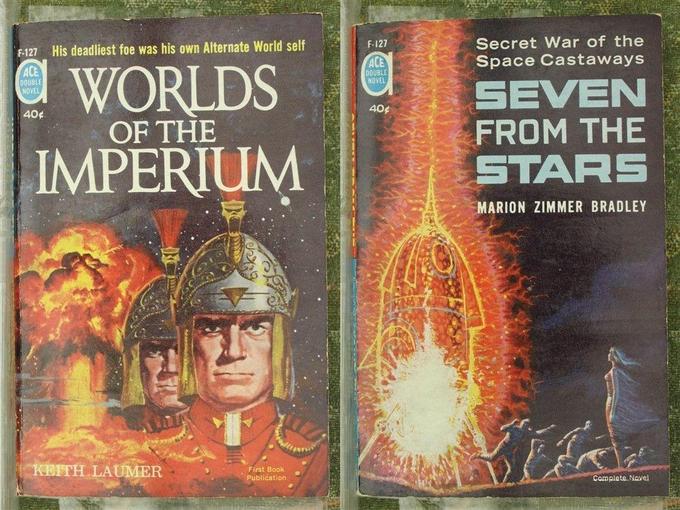 Sharkey’s “Old Friends are the Best” is a slight, mildly amusing, bit of SF horror… a plant is discovered on the Moon, and brought back to Earth as a scientific marvel – with, of course, unfortunate (and scientifically absurd) results.

Watson Parker is the “Little Known Writer” this issue. He published only two stories in the genre, the other one in Science Fiction Stories in 1958. I don’t know if he might be the famous South Dakota historian of that name, who lived from 1924 to 2013. “Suzy” is about a woman whose job is to talk to the isolated men working on spaceships, to keep them sane. She uses a number of strategies, including pretending to fall in love with them. But what if she really did fall in love? That’s forbidden, of course, and besides, she has a problem… The nature of her issue is, in the end, less interesting that what I had supposed…

Finally, Robert Bloch’s “The Man Who Murdered Tomorrow” is probably the best shorter piece this issue. It’s a somewhat gleefully cynical story, about the men who have the responsibility of deciding whether or not to “push the button” that will start a nuclear war. A writer finagles a chance to interview the General in charge… unfortunately, the writer has his own theories about, well, start with Jack the Ripper… As I said, gleefully cynical, distinctly mordant.

Rich Horton’s last Retro Review for us was the October 1967 issue of Galaxy. See all of Rich’s retro-reviews here.

Thanks! I appreciate these retro-reviews of old magazines.

I suppose some visitors to this site have never actually seen sf digest-size magazines. Not everything originally published in them deserved to be reprinted (or published the first time, either, in the mags themselves), but it used to be fun to take home one or two or a few of them from second-hand stores and so on and browse them. The letters columns could be highlights. For example, I have an old issue of Fantastic with a nice long letter about Mervyn Peake, whom the writer knew personally. I wonder if someone with access to files of these old magazines shouldn’t edit a collection of letters from them. Maybe there wouldn’t be much of a market for such a book, but I for one would be interested. At the same time, a modern book with dozens of letters wouldn’t be the same as seeing the letters in their original setting.

Thanks an interesting idea! And I agree completely that the letters sections (and the review columns) of these old digest magazines could sometimes be the highlight of the issue. I learned that lesson early, and always made generous space for the letters section in the print version of Black Gate. 🙂

The letters section in BLACK GATE was excellent … and so few survive these days (really only Analog’s, I think?)