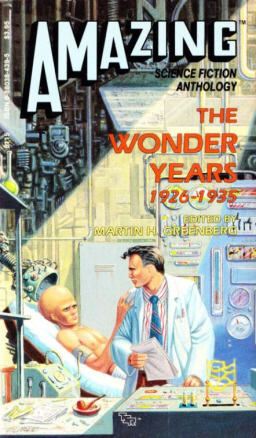 D&D publisher TSR generally gets a bad rap for their brief venture into science fiction in the 1980s. Much of their D&D related fiction — especially the Weis and Hickman DragonLance novels, which launched their entire publishing line — is still remembered fondly today. But does anybody remember Martin Caidin’s Buck Rogers novel, or Martin H. Greenberg’s Starfall anthology?

Which is a shame. At one point — riding high on the success of the DragonLance books — TSR claimed it was the largest publisher of SF and fantasy titles in the nation, and it sure looked that way whenever I walked into a bookstore. There were literally racks of the stuff: DragonLance books, Forgotten Realms books, Dark Sun novels, Birthright novels, SpellJammer novels, Greyhawk books, Ravenloft novels, Planescape novels… and on and on and on.

If you were a serious genre reader in the late 80s, you gradually trained your eyes to ignore it all as you scanned the shelves for anything new and original.

What many of us never knew — because they were hidden alongside all their gaming fiction — was that TSR published dozens of new and original SF and fantasy novels, unconnected to any of their gaming fiction, including bestselling author Sharyn McCrumb’s famous science fiction pastiche Bimbos of the Death Sun (1987), Paul B. Thompson and Tonya C. Cook’s Red Sands (1988), Ardath Mayhar and Ron Fortier’s Monkey Station (1989), Robin Wayne Bailey’s Nightwatch (1990), and many others.

But my favorite books published by TSR during this period weren’t novels at all. They were five anthologies collecting stories from the pulp days of Amazing Stories, edited by Martin H. Greenberg.

The financial incentive for publishing these was pretty clear. TSR acquired Amazing Stories in 1982, and TSR was the expert in leveraging all aspects of publishing to support their premium properties. 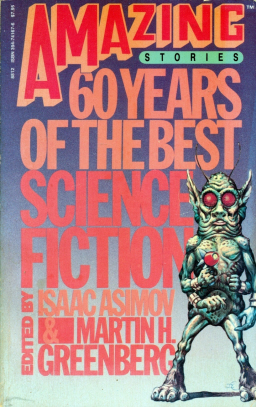 If simultaneously publishing D&D and D&D novels had proved synergistic, bringing fantasy readers to gaming and vice versa, why not try the same with Amazing Stories?

And so Martin H. Greenberg got a green light to do a total of five Amazing anthologies for TSR:

Amazing Stories has been mined pretty effectively by anthologists over the years. Asimov called it the finest of the early SF magazines, and reprinted somewhere around a dozen stories from the early pulp era of Amazing in his superb Before the Golden Age, just as an example.

But by gathering many of the most acclaimed short stories from one of the most famous SF magazines in history, as well as many overlooked gems, editor Greenberg produced five terrific books which, taken together, give some great insight into the way Amazing shaped the entire genre, and the way its famous editors — especially Hugo Gernsback, T. O’Conor Sloane, Raymond A. Palmer, Howard Browne, Cele Goldsmith, and Ted White — shaped it.

Amazing Stories: 60 Years of the Best Science Fiction appeared first. It collected 19 stories, starting with David H. Keller’s “The Revolt of the Pedestrians” (1928), to Pat Murphy’s “In the Islands” (1983). Here’s the Table of Contents: 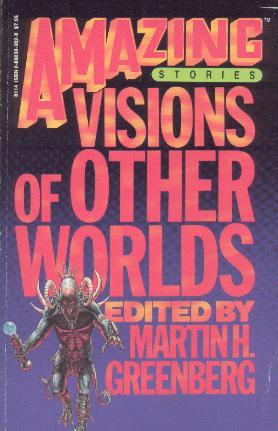 Isaac Asimov provided the introduction, “Amazing Stories and I.” By this time Asimov had already had his own magazine for eight years — Isaac Asimov’s Science Fiction Magazine — and was able to bring a unique viewpoint. (He also offered an explanation for why he renamed his contribution, originally published in 1961 under the title “Playboy and the Slime God.”)

As a bonus it also has a gorgeous color insert: sixteen pages reprinting six decades of cover art, with some insightful commentary on changing art styles.

Amazing Stories: Visions of Other Worlds arrived in 1986. Robert Silverberg provided the introduction, explaining that the focus of this volume was to illustrate “the theme of dealing with aliens — that is, with those who are not ourselves.”

This volume ignored the first three decades of the magazine’s life, starting off in the 50s with fifteen stories dating from 1953 to 1980:

As I mentioned, Amazing had been mined plenty of times before and — while they were both fine books — Greenberg’s first two TSR anthologies didn’t really make a major impact.

But his next effort, a three-volume paperback series covering 1926 to 1955 in nearly 1,000 pages, was the first true survey anthology of Amazing Stories, and should be in every pulp collector’s library.

The first volume, Amazing Science Fiction Anthology: The Wonder Years: 1926-1935, appeared in 1987 and included Jack Williamson, Clark Ashton Smith, H.P. Lovecraft, Edmond Hamilton, and many more. This time Greenberg chose Jack Williamson for the introduction, and each story had a new illo done in the pulp style by George Barr, Hank Jankus, or Paul Jaquays.

The decade was magical for many reasons. The editors, Hugo Gernsback and later T. O’Conor Sloane, discovered dozens of top-notch writers including E.E. “Doc” Smith, Jack Williamson, John W. Campbell, and many others — and virtually defined science fiction for a generation.

This was the era of Charles R. Tanner’s “Tumithak of the Corridors” and Doc Smith’s The Skylark of Space, both of which originally appeared in Amazing.

Here’s the back cover copy of the book, which I found particular effective:

A meteor hits ground near home and nothing is the same thereafter. A man from 30,000 years into the future pops into the living room. Another man stays alive to see the end of mankind and the world. Insects threaten to become the dominant species on earth.

In the Wonder Years. The first ten years of Amazing Stories. A time when radium, atoms, and audio-visual communications were the hot new scientific topics of the day. A time when space travel was only a dream in a few creative minds.

And the complete Table of Contents: 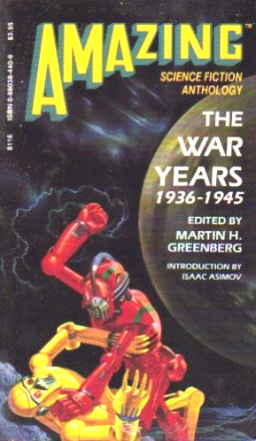 For The War Years: 1936-1945, Greenberg asked Asimov to provide the intro again, and he did his usual fine job, saying:

That may be a little bit of hyperbole. By 1938 Amazing‘s circulation was down to only 15,000 — disastrous for a pulp magazine — and in January 1938 Ziff-Davis took over the magazine. The April issue was Sloane’s last, and Raymond A. Palmer became the new editor.

This wasn’t a particularly successful era for Amazing. It had been solidly replaced at the forefront of the SF genre by John W. Campbell’s Astounding by this point and, under Palmer’s tenure, it wasn’t developing many new authors, relying chiefly on house writers, usually writing under pseudonyms.

Palmer’s tenure is remembered chiefly for his mistakes, such as promoting The Shaver Mystery stories of Richard Shaver, the first of which, “I Remember Lemuria,” appeared in 1945.

Presented by Palmer as a mixture of truth and fiction, Shaver’s stories about prehistoric civilizations helped dramatically increase Amazing‘s circulation, but opened the magazine to a lot of ridicule. Serious writers began to abandon it.

But that was the tail end of the decade, and before that there was still plenty of good fiction to be had.

Robots always follow humans’ orders. But is it for good or ill…? The ability to make a living duplicate of someone has real appeal. But can a duplicate be too perfect…? The problems on Earth can be avoided by sending people into space to found new homeland. But what happens to the generations born in the ships…? The human mind is a wondrous thing. But can it be shared with another species…?

Isaac Asimov, Ray Bradbury, Ralph Milne Farley, Stanley Weinbaum, John Wyndham – these are among the great writers who first tested their ideas and talents during these years when life on Earth was so troubled. 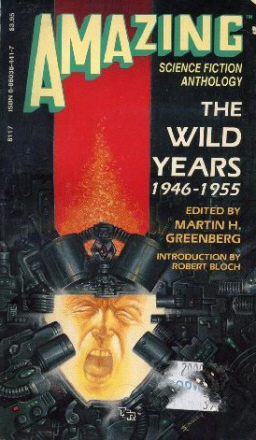 Palmer resigned in 1949 to start his own magazine, Fate, and Howard Browne took over as editor. He began by reportedly throwing away 300,000 words of fiction Palmer had in inventory. Browne lured the best writers of the era to the magazine, including Philip K. Dick, H. Beam Piper, Isaac Asimov, Robert Sheckley, Theodore Sturgeon, Clifford D. Simak, and many others, and he stayed with the magazine until 1956.

Our appliances usually serve us well. But what are we asking too much? Do our machines plot behind our backs…? Will a person who catches the latest “bug” recover as superhuman – or something else…? When the fastest gun in the West thinks the gun into his handm how do you beat him…? People can’t really live in Jupiter’s seething gaseous atmosphere – or can they…?

These are some of the questions many science fiction authors asked during mind-expanding “Wild Years”, the third decade of Amazing Stories. 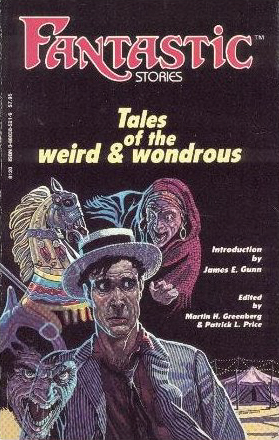 Fantastic magazine merged with Amazing in 1979, and presumably the rights to the name reverted to TSR when they acquired Amazing. This is another excellent book well worth tracking down for collectors; authors include Isaac Asimov, James E Gunn, Lester del Rey, Robert Bloch, Ursula K LeGuin, Robert F. Young and many others.

One final note: I acquired virtually all of these books well after they were published, usually online through eBay or Amazon. You can get good used copies of virtually all of them for under 5 – 10 bucks (with the possible exception of Fantastic Stories: Tales of the Weird & Wondrous), probably less than a new paperback.

They’re well worth it.

I’ve got the three decade anthologies (and maybe 60 Years), but I wasn’t aware of Visions of Other Worlds or Fantastic Stories. I’ll have to look for them. Thanks for the heads-up.

Asimov was referring precisely to the handover of ASTOUNDING from F. Orlin Tremaine, whose ASTOUNDING Asimov admired, to John W. Campbell, who he admired even more and strove to sell to (and soon did)…this in the second decade of AMAZING’s run.

Exclusively serious writers were not terribly welcome in Palmer’s magazines, so it’s at best arguable that the Shaver “mystery” stuff was a mistake…any more than Campbell’s endorsement or at times merely exploration of fringe science in ASTOUNDING and ANALOG was. I don’t need to read about Deros nor dowsing, but they served their editors’ purposes.

Actually, since TSR nor their heirs didn’t trademark FANTASTIC’s title (apparently), the magazine PIRATE WRITINGS retitled itself as a revival of FANTASTIC for a few years around the turn of the millennium.

Theodore Sturgeon’s brilliant, disturbing horror story “A Way of Thinking” should’ve been in FANTASTIC instead of AMAZING…nothing sfnal about it. Still great.

[…] That’s a pic of one of the boxes I unloaded in my library this morning. It contained 103 paperbacks from the vast collection of the great Martin H. Greenberg, one of the most prolific and talented anthologists our field has ever seen (click for a more legible version). Greenberg died almost exactly a year ago, on June 25, 2011. He left behind some 2,500 anthologies and other books he created — including over 120 co-edited with his friend Isaac Asimov — and his company Tekno Books, a book packager which produced nearly 150 books a year. I wrote about six of them just last week in my article TSR’s Amazing Science Fiction Anthologies. […]

> wasn’t aware of Visions of Other Worlds or Fantastic Stories. I’ll have to look for them.

I just recently acquired the FANTASTIC anthology myself. It’s worth a separate post all on its own, I think. It certainly worth tracking down.

> Asimov was referring precisely to the handover of ASTOUNDING from F. Orlin Tremaine,
> whose ASTOUNDING Asimov admired, to John W. Campbell, who he admired even more and strove to sell to (and soon did)…
> this in the second decade of AMAZING’s run.

I expect you’re absolutely right. In BEFORE THE GOLDEN AGE, in comparing the relative worth of the early SF pulps, he said “It was AMAZING STORIES all the way with me,” but he was referring to the early 30s, well before Campbell took over ASTOUNDING.

> Exclusively serious writers were not terribly welcome in Palmer’s magazines, so it’s at best arguable
> that the Shaver “mystery” stuff was a mistake.

Yup. It must have been hard to see it that way at the time, considering how dramatically the sales of AMAZING increased while Palmer was publishing Shaver.