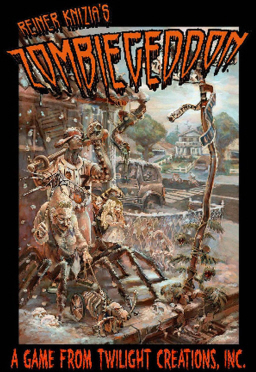 I’m still unpacking from the horrible bout of auction fever I suffered back in March. I uncovered a box of games buried by loot from the April Windy City Pulp and Paper Show in my library on Friday … man, I go to too many auctions.

It’s fun to dig through unexpected boxes of games, though. It’s sort of like archaeology, especially since each item still has the auction tag and price on it. Man, what kind of primitive barbarian would pay 28 bucks for a copy of StarSoldier?? Since it’s in the box … me, apparently.

Still, there’s some intriguing surprises. Like this copy of Reiner Knizia’s Zombiegeddon I found. [Click on the image at right to embiggen.]

I don’t remember buying this game. In truth, twenty minutes ago, I didn’t even know it existed.

But I can imagine what happened. They rattle through items pretty fast at the Games Plus Spring Auction. The auctioneer held it up, I got a quick glimpse of a rare and mysterious gaming artifact with an old lady with spider legs and an undead dog on the cover, I heard the words “mumble mumble ZOMBIE mumble,” and everything went black.  Three months later, I’m holding a copy of Zombiegeddon and someone has fifteen bucks of my money.

Zombiegeddon looks pretty neat, though.  I mean, how could it not? Here’s the text on the back:

Well, it was nice while it lasted! You have gotten word that the end is near, and Armageddon is right around the corner. (Actually, it begins tonight!) Since it may be a while before you can get to the store, today would be a good time to gather as many supplies as possible. After all, tomorrow might be the beginning of a long, cold, (nuclear) winter!

Reiner Knizia’s Zombiegeddon is a fast-paced, perfect-information, strategy game. Each player spends the first half of the game rushing around the board collecting supplies and trying to stop your pesky neighbors from taking stuff that is rightfully yours … The second half of the game is spent trying to survive. Sure their is some good stuff around, but it certainly isn’t plentiful and let’s face it, everyone is still trying to take it before you do! (Whoever has the most stuff at the end of the game wins!)

The board looks pretty pedestrian — essentially just a blank grid — but the components are sturdy, and the rule book is only two pages. Maybe Drew will play this with me, once we finally find that frickin’ holy grail.

Reiner Knizia’s Zombiegeddon is available from Twilight Creations. It was published in March 2009, and retails for $24.99. The complete rulebook in PDF is here.