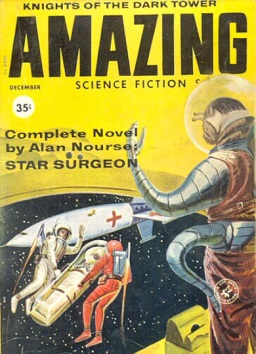 Here’s an issue from very early in Cele Goldsmith’s tenure (and very early in my life, I might add – this issue presumably appeared about a month after I did). It was in fact the first issue of Goldsmith’s second year at the helm.

The cover is by Leo Summers, illustrating (not too accurately) Alan Nourse’s novel Star Surgeon, which appears complete in this issue. Above the magazine title is the title of another story, “Knights of the Dark Tower,” without mention of the author, as was Amazing’s curious habit. Interior illustrations are by Summers, Virgil Finlay, and Mel Varga (with one uncredited).

The editorial, by Norman Lobsenz, celebrates Walter X. Osborn, a man living in the Philippines who was then 85 and had been reading Amazing since its beginning. Osborn’s favorite story? Possibly “The Green Man Returns,” by Harold M. Sherman from December 1947. His least favorite? The Shaver mysteries.

S. E. Cotts’ book review column, The Spectroscope, is extremely short. The one novel covered is Seed of Light, by Edmund Cooper, which Cotts criticizes for being too ambitious. But high praise goes to two anthologies, The World That Couldn’t Be, edited by H. L. Gold, and Mary Kornbluth’s Science Fiction Showcase, which she put together with Fred Pohl’s help (Pohl insists she picked the stories, though – he just helped clear the rights) after Cyril Kornbluth’s death.

The letter column features Bob Anderson, John Hitt, Ray Hahn, Jacqueline Brice, James S. Veldman, Paul Matthews, and Bobby Gene Warner (no names familiar to me, though Warner, as I recall, showed up in another Amazing lettercol from this period). No real controversies. Lots of Praise for Murray Leinster’s “Long Ago, Far Away”.

There is one “Complete Novel”, and 6 short stories, one of them a very brief vignette. 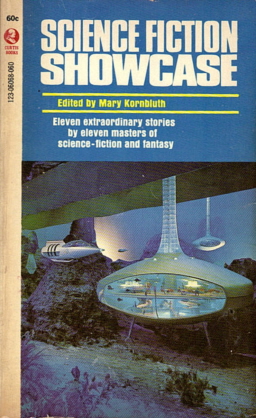 “The Irrealist” is the only story credited to Thomas Sharkey in the ISFDB, and it’s just the sort of thing that would be someone’s only story: about an aspiring writer in a post-apocalyptic future rejected because his stories are unrealistic: they have happy endings. (Sorry for giving it away!)

As for Ed Ritter, he’s credited with two stories: this one and “Private Secretary” from Bill Hamling’s Imaginative Tales in 1955. “The Lady in 17A” is about an old maid who buys a robot from a failed salesman to be a companion. The salesman, at the end of his tether, takes her money and substitutes himself for the robot, and then finds himself feeling a lot of affection for the woman. Perhaps she does too – the ending is a bit of a shock, though not much of one.

Finally, Wilson Kane is also only credited by the ISFDB with a few stories: four in fact, all in Amazing/Fantastic in 1958/1959 (though one as published under another name in Other Worlds in 1952). The ISFDB lists the true author of this piece as “unknown,” but notes that at least one other “Wilson Kane” story is attributed to Robert Bloch. (That is “Hungarian Rhapsody,” since anthologized in multiple places as by Bloch.) I wondered if other “Kane” stories were by Bloch, but Mike Ashley reports that Bloch confirmed that “Hungarian Rhapsody” was his only appearance under that name.

The story itself is minor and a bit fuzzy in tone. A beautiful woman who is also a witch finds a mysterious painting that she determines is the key to the treasures of a certain ancient order, and she finagles a young man to help her steal from them… and of course things don’t go as smoothly as she hopes. There’s more going on here than that, and some kind of neat ideas that don’t all seem to work together.

The other writers are more significant, though Paul Fairman only because he was Cele Goldsmith’s immediate predecessor as editor of Amazing and Fantastic. As a writer, Fairman was, it might be fairest to say, a prolific hack. He often wrote as Ivar Jorgensen. (I seem to recall Robert Silverberg mentioning that Fairman was upset with him for using the Jorgensen name — which he thought was a house name — on some of his own stories.)

He is often credited with ghosting a number of novels for Lester Del Rey. Late in his career he wrote novelizations of a few popular TV series: That Girl, Love, American Style, and Bridget Loves Bernie. (I watched and enjoyed that last series in its only season – I did not realize it was canceled so quickly, apparently because people objected to the interfaith marriage of the main characters.)

Anyway, Fairman’s story, “A Great Night in the Heavens,” is very brief, and slightly reminiscent of stories like “Nightfall” and “All Summer in a Day” – a family on a cloud-covered planet takes a trip to witness one of the rare “Clearings,” when the stars are visible.

Phyllis Gotlieb was a very significant figure in the history of Canadian SF, and the Sunburst Award is named after the title of her first novel. Still, she has always seemed to me a writer more respected than widely read, which may be more my fault than hers. Cele Goldsmith was very important to Gotlieb’s career – most of her early stories appeared in Goldsmith’s Amazing/Fantastic, as did Sunburst. “Phantom Foot” was her second published story. It’s decent stuff, about an expedition to a planet occupied by telepathic aliens who prey on visitors’ secret fears and weaknesses. 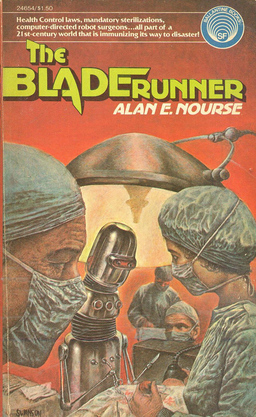 The other short story is Rosel George Brown’s “Signs of the Times”, a clever story suggesting that human history has been manipulated by unknown forces using, in essence, subliminal advertising.

And finally the novel, Alan E. Nourse’s “Star Surgeon.” Nourse was a pretty important figure in my early SF reading – as I’ve said before, I began by reading three writers: Asimov, Clarke, and Nourse. Not sure why Nourse – the somewhat YA-ish flavor of much of his work might have been a reason.

Anyway, my favorite Nourse novel was The Universe Between (1965, expanded from a couple of early ’50s Astounding stories.) In retrospect, I think I may exaggerate how much Nourse I read – The Universe Beteween, The Bladerunner, Mercy Men, Star Surgeon, Trouble on Titan were about it.

“Star Surgeon” became a book in 1960, from David McKay. I didn’t remember it well, so this reread was really like a new read. I have no idea if the book was expanded from the magazine appearance. Nourse was of course a doctor (and the author of a medical column for Good Housekeeping), and this is a medical-themed story, as the title makes clear.

Dal Timgar is an alien who has come to Earth to learn to be a doctor. Earth is angling for membership in the Galactic Confederation. Their only selling point is expertise in medicine – somewhat implausibly, no other alien races have really figured out the life sciences. So Dal faces a lot of prejudice, not just because he’s “different,” but because a nonhuman succeeding at medicine threatens Earth’s preeminent position.

So we meet him as he graduates and is assigned to his first ship. Again somewhat implausibly, these ships are sent out alone to the galaxy, staffed only by three new graduates. Naturally enough, his fellow crewmen include one man sympathetic to his position, and one hostile. Likewise, he meets one older doctor who is supportive, and one very influential physician harshly opposed. The story works out as you might predict – a couple of minor episodes on different planets, followed by a major crisis in which an alien race is succumbing to a difficult to understand disease. In fact, the medical mystery presented is kind of cool. The rest of the working out of the plot is pretty cliché.

So, for the most part this is a hackneyed sort of book. But it still works nicely enough – Nourse is an effective enough writer, and while he never surprises, the characters, if trite, are engaging. I enjoyed it, but I can’t really recommend it very highly.

Rich Horton’s last retro-review for us was the March 1961 issue of Amazing Stories.

[…] Rich Horton’s last retro-review for us was the December 1959 issue of Amazing Stories. […]