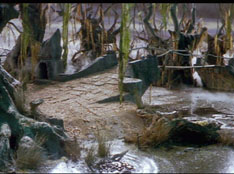 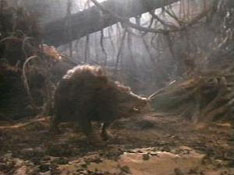 Fantasy belongs to woods and to water. Sure, mountains deserve their due, but they’ve never seemed, in my experience, to much care about what happens on and in them. They are mountains, they don’t react on a scale that people can usually see, unless they avalanche, and then you don’t usually live to tell about it (spit if you’re buried, dig in the opposite direction).

Anyway, I don’t know from mountains, I live near the sleepiest parts of the sleepy Appalachians, and while they can do some Things, most of those things are bound up in the forest.

Anyway, wood and water, right? Swamp, bog, is both, and I think, it’s also a little bit more. Woods can be cut and cleared (I have seen old-growth forest once in my life, at the opposite end of the continent). New forest is strong, but it doesn’t have the weight of ages. Waters can be poled and dredged and known, except for the sea, but the sea is the sea and no water that is not the sea, fresh, stagnant or brackish has the amount of mystery. 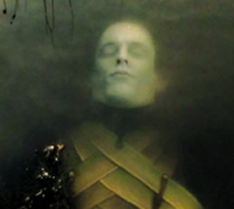 But bogs are not land that people can easily use, so, a lot of the time they won’t. Sure, you can drain them, but unless there is a compelling reason, you’re not going to bother. That means they get away from us a lot easier. You can believe there are parts of a bog that people haven’t been or don’t go.Real wilderness, which is not a thing that’s easy to find around these parts. Or, at least the illusion of it.

You can hide a lot in a swamp and no one’s going to ever know.  Bogs are a place to lose things and forget them; be they fallen elves in the Dead Marsh, Jedi masters in exile on Dagobah (cry foul if you like on that one) or a faithful steed who succumbed to the Sadness.

There is usually one nearby, since people have to live near water. A place where no one goes, near where people live – that’s a good location for a monster or a bugbear that needs tasty human goodness, but not the hassle of mobs. If you’re a goblin king with tight pants and unreliable minions, it’s a good locus for browbeating and threats (if it possesses eternal stench, so much the better). 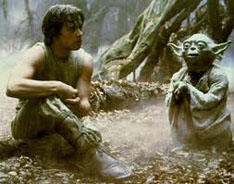 It’s a forbidding sanctuary from warmongering princes, once you and your true love get past the fire gouts, lightning sand (snow sand if you’re being fancy) and unusually sized native fauna.

It’s a place made for witches to go when the workaday gets too demanding and all the people who want to charm and curse one another and blame their weird eggs and sour milk on you. When someone goes out to the swamp to get your help in wickedness, it’s like pre-screening for a loan; the fact that they came and found you means they are likely to be able to pay your price. 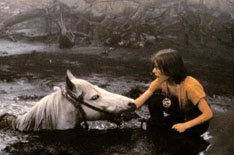 So, yeah, we’ve gone to all the usual places, the dead swamps, the spooky forbidden bogs, the marshes that only debatably belong to fantasy, and the place where David Bowie drops off his hirelings.

One more place I want to take us, and that’s a swamp that borders a little town called Charon Mississippi in the early part of last century.  The not-exactly titular bayou in Jeremy Love’s comic of the same name (I must stress, though, it’s not quite, or not solely titular status) is all the things that a swamp in fantasy ought to be.

It is a place to forget, in this case, the bodies of black victims of racial violence, dumped by white mobs.  It is the home to monsters, both good and evil.  It is, as all Fantasyscapes should be, the gateway to another where and another when. 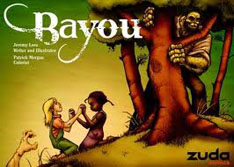 You can still read the first part for free online, and if it does not take you somewhere, I’m not sure what will.

That’s what time and space we have for this installment. I will be back to take you some other place, not sure where, yet, but I know it will be quite the sight.

I wish I could show you more.

When someone goes out to the swamp to get your help in wickedness, it’s like pre-screening for a loan; the fact that they came and found you means they are likely to be able to pay your price.

Heh, yeah: Congratulations, you are already pre-approved for the dubious deal you’re about to do.

The Marshes of Morva in The Black Cauldron were among my early favorite wetlands.

+1 for the princess bride picture. everyone love the fire swamp and the Rodents of Unusual Size

Asakiyume: I actually had a photo of Lloyd Alexander’s Black Cauldron ready to go (because of the Marshes of Morva), but we ran out of text! I love that book. And those witches. Fo’ sho!

A Swamp is also a good place for cultists to worship Great Cthulhu. This post makes me yearn for the omnipresent malevolence of the bayou.

[…] like to move when I think; exercise clears the mind and after all that time in the swamp, I think anyone would be grateful for a chance to stretch their legs.  We’re taking this show, […]