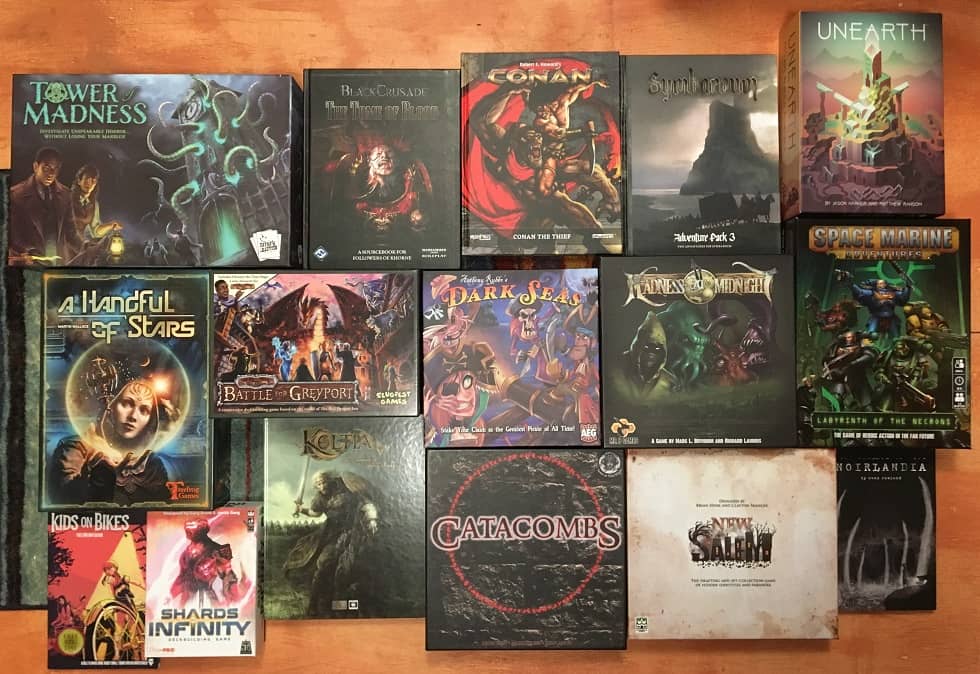 I’ve been attending the Games Plus Auction in Mount Prospect, Illinois ever since David Kenzer first told me about it, when we worked at Motorola in the late 90s. So, twenty years, give or take. I’ve been writing about it here ever since my first report in 2012 (in the appropriately titled “Spring in Illinois brings… Auction Fever.”)

The four-day auction occurs twice a year, in Spring and Fall.  Each day focuses on one of four popular themes: Thursday is collectable and tradable games like Magic: The Gathering and the Dungeons and Dragons Miniatures Game; Friday is historical wargames and family games; and Sunday is the massive miniatures auction, focused on Warhammer and like-minded pastimes. I’ve checked in on the others over the years, but my jam is the Saturday Science Fiction and RPG auction, which includes board games, minigames, and role playing rules, supplements, adventures, and magazines.  It runs from 10:00 am to 5:00 pm, with no break, and this year was on March 2.

When I first started going, I was was on the hunt mostly for 70s and 80s RPG and gaming collectables, especially TSR gaming modules, microgames, Avalon Hill and Chaosium board games like Stellar Crusade and Dragon Pass, and of course ultra-rare Dwarfstar titles like Barbarian Prince. That’s changed dramatically over the decades. We live in a golden age of science fiction and fantasy board gaming, and between the many, many active publishers, countless Kickstarters and other crowdfunding campaigns, and seemingly numerous new role playing games, it’s impossible for me to keep track of all the new releases.

Those games show up in great quantity as the skilled auctioneers move rapid-fire through thousands of titles over seven hours, and often at bargain prices. Nowadays I attend the auction chiefly to discover what’s new and exciting in fantasy and science fiction board gaming, and see if I can’t pick up a few. It’s an expensive outing, to be sure, which is why I save up for months beforehand. I rarely escape will a bill less than a thousand dollars, and this year was no exception. When they totaled up the damage at the end of the Saturday auction, I’d spent $1,573 on games that filled some 15 boxes. 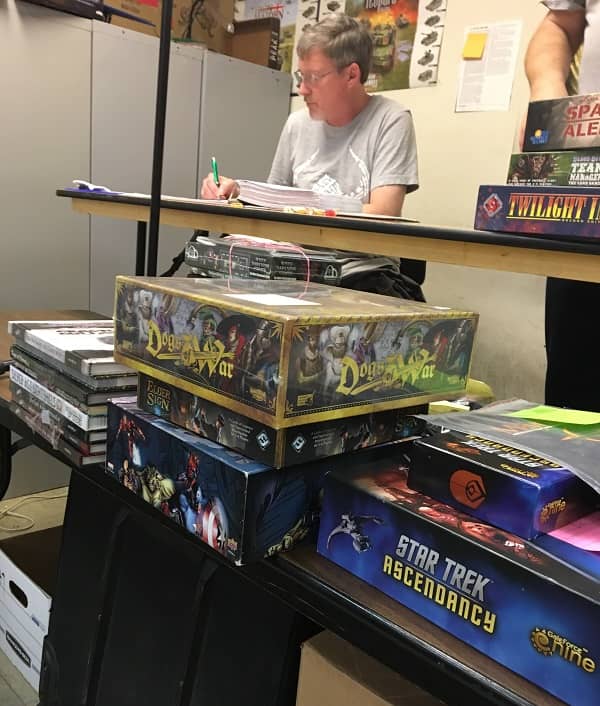 The 2019 Games Plus Spring Auction gets underway

Every once in a while a long-sought title would show up at the podium, and when that happened I wasn’t shy about bidding. I won a few such precious treasures, including Warhammer Quest: Shadows Over Hammerhall, Warhammer Quest: Silver Tower, Shadows of Brimstone: City of the Ancients, Terra Mystica, Fantasy Flight’s Elder Sign and City of Thieves, Cool Mini or Not’s Super Dungeon Explore, Monte Cook’s Numenera rules, Alien Frontiers, Emergent Games’s $120 base set for Fireteam Zero, and others.

But much more often the game flashing before my eyes was one I’d never seen before, and never even knew existed. And trust me, more than a few of those were tantalizing prizes.

When I first started writing about the Games Plus Auction seven years ago, I jokingly compared it to Paris Fashion Week, where the world’s top designers unveil new collections in seven days of high fashion overload. But over the years, I’ve come to believe that the analogy is actually pretty apt. Keeping up with hundreds of new releases every year is a nearly impossible task, especially for casual gamers, so sitting down in the front row at a Games Plus auction is a rapid-fire introduction to 12 months of exciting new games (not to mention the countless titles you missed the previous years). And if you’re quick, it’s also a chance to buy a lot of them at great prices.

But what’s a good price for a game you’ve never heard of? Ah, there’s the rub. And that’s what adds an addictive element of uncertainty and danger to the auction.

If you were fast and lucky and good with your fingers, you could look some of the games up on your cell phone before they came up for auction. A few rapid keystrokes could sometimes tell you that the game was still in print and available at Amazon for $30. Or that it retailed for $117 when it was available, like the massive Defenders of the Last Stand by 8th Summit. 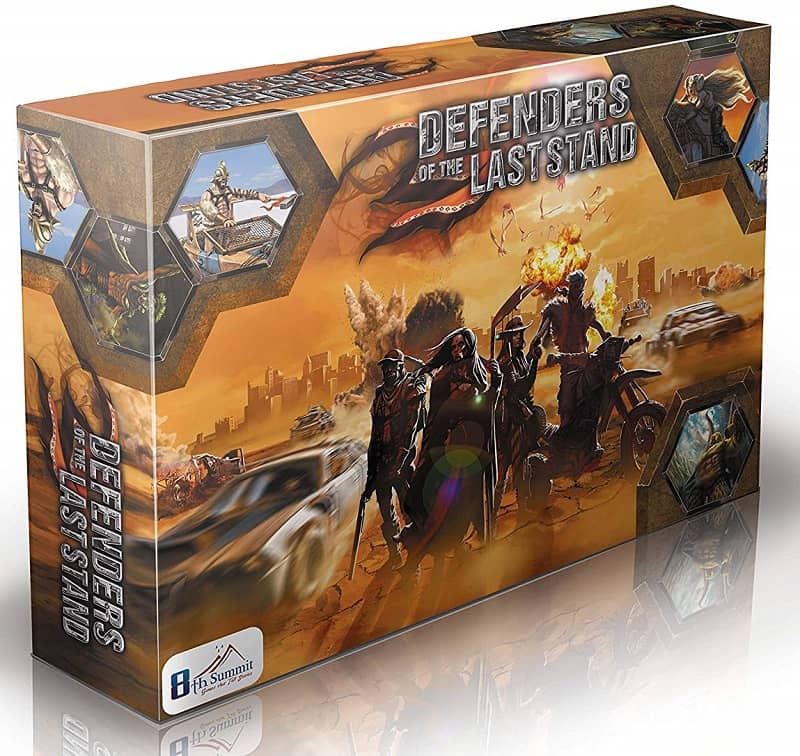 Defenders Of The Last Stand by 8th Summit

Most times, of course, I didn’t have the luxury of even that hasty research. I had seconds to gawk at a game, make a bid, and decide how high I wanted to go. That’s the fun of the auction. You win a few, overpay a few times, and feel the bitter dregs of regret for a fantastic deal that slips through your fingers.

Here’s a few of the enticing games that got away, and the price they sold for (when I had time to jot it down). 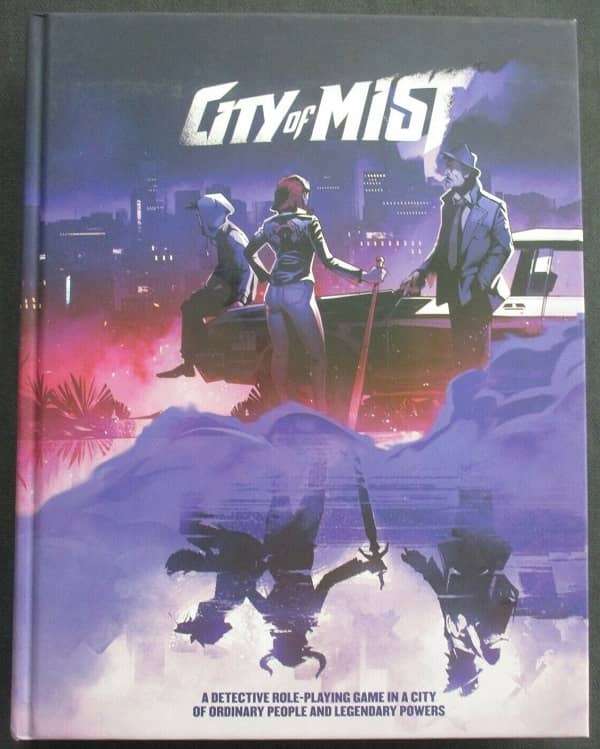 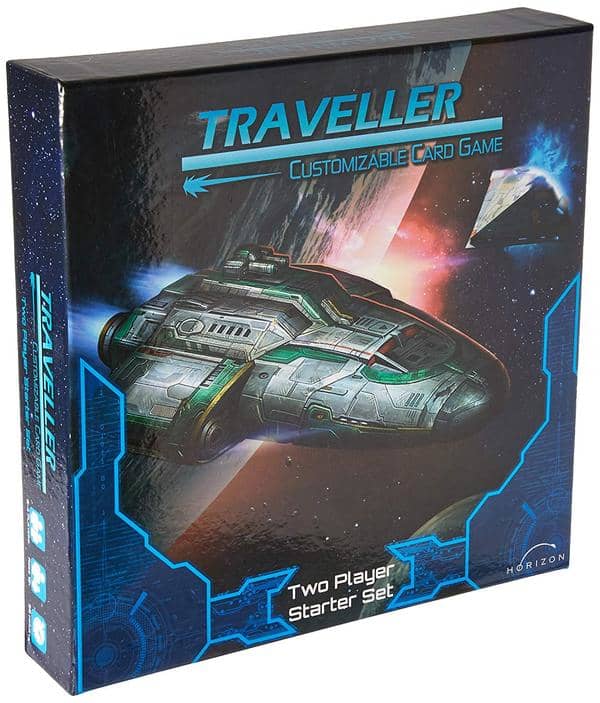 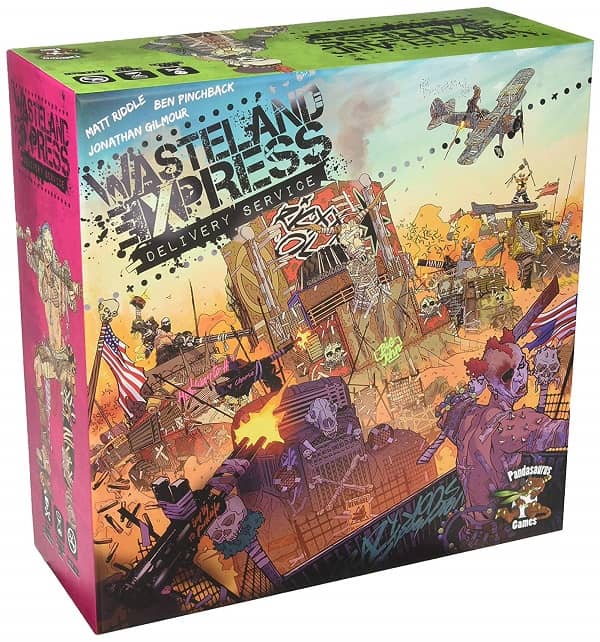 As bitter as it was to miss out on those great games, those are the breaks. At least I was able to write many of the titles down as they flew by, and I can start the hunt for some of the more interesting games on the list. In the comfort of my home, where I can do some proper comparison shopping.

Besides, there was no shortage of games that didn’t escape my vile clutches during the auction, including the assortment in the picture at the top. They include:

When I brought the games home for safe storage in the Cave of Wonders, I had a chance to catalog them. These days I do that with photographs. Here’s a few pics I took of my successful haul from the 2019 Games Plus auction (click the images for bigger versions).

There’s a lot of great titles in those boxes to explore over the next few months. In Part II of this article I included many more photos from the auction, and in Part II I’ll highlight a few of my favorite discoveries.

In the meantime, here’s some of our previous coverage of the Games Plus Auction over the years.

And here’s some of the better games I’ve discovered at the auction.

Spring 2013: Earn Your Gold Honestly in Valdora — By Digging For It
Spring 2014: Delve Into a 3-Part Supermodule With Cormyr: The Tearing of the Weave
Spring 2014: A Shadow Falls Over Faerûn: Anauroch: The Empire of Shade
Spring 2014: Taking Five Worlds Before Breakfast: The Pleasures of EVE Conquests
Spring 2014: Take Dungeon Delving to the High Seas in Descent: The Sea of Blood
Fall 2014: Keep Your Blaster Close: The Many Horrors of Outbreak: Deep Space
Fall 2014: Step into a Dark Alternative London in Unhallowed Metropolis Revised
Spring 2017: Dungeons That Fight Back: 13th Age: Bestiary and Eyes of the Stone Thief from Pelgrane Press
Fall 2017: Diplomacy and Trade in the Vastness of Space: Among the Stars by Artipia Games
Fall 2017: Looting is Better With Friends: Dungeon Dwellers

I always enjoy this annual post. USD1573 well spent there John. You are so right, we are in a golden age. Going past any game shop ahs one agonising between buying a game (which one?) and whether it will be as good as stated, or what boardgamegeek rates it as and whether it will find use, drumming up enough friends to give it a go.

Did you pick up some loot at Gary Con, as well?

> drumming up enough friends to give it a go.

Ah, that’s my current tragedy. Finding a gaming group now that my kids have all gone off to college.

> Did you pick up some loot at Gary Con, as well?

I most certainly did. Although I was limited to what I could carry back out to the car (which was parked two miles away in a remote lot), so I ended up with not much more than a single big box.

If I have time next week I will post some pics.

pick up a few

I don’t think that means what you think it means.

The Conan boardgame from Monolith was on Amazon this week for over 50% off ($57 today). Because of the Overlord vs. Players mechanic (like Descent, but without an app for solo play), I don’t think my gaming group is going to ever play it.

But it was less than $1 a mini at that price. And the minis are GREAT!

They’d be the best in my collection if they were painted.

All of the game components, including the box, are high quality.

> I don’t think that means what you think it means.

Ha! It didn’t seem like “a few” when I had to pack them all in the car, that’s for sure.