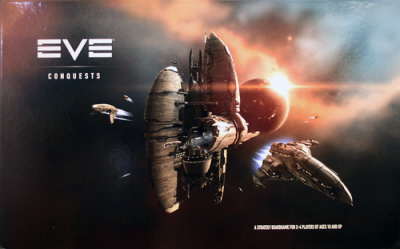 I have a real weakness for board games, and especially large-scale space strategy games. It’s one thing to punch that Pop-O-Matic bubble and move your little green marker around a Trouble board; it’s something else entirely to stealthily assemble an unstoppable fleet and launch them en masse towards the unsuspecting alien armada in orbit around Sirius. Ah, I get a thrill just thinking about it.

Sometimes a great space game will sneak up on me. It’s not my fault — I can barely keep up with all the fantasy books that show up at Barnes & Noble every week. I’ve totally given up on keeping track of new sci-fi board games.

This one snuck up on me at the Games Plus Spring Auction back in March. I’m sitting there in the front row, minding my own business, when the auctioneer suddenly hefts this big heavy box unto his shoulder, says something like “EVE Conquests, a strategy game set in the world of EVE Online. Opening bid: one dollar,” and starts the bidding.

So I blink a couple of times, and think, what the heck is this thing? I thought EVE Online was an online game? Oooooo, it looks cool, whatever it is. And heavy. Like it’s packed with beautiful starship miniatures and mounted boards and strange artifacts of alien civilizations… I want it. I shall bid on it.

Well, not for long I won’t. Twenty seconds after the bidding started, it moved well out of my price range and remained there for some time. Screw this, I thought. I can find a cheaper copy online. Famous last words.

It turns out that EVE Conquests, in addition to being grand in scale, very ambitious, and gorgeous to look at, is also a very rare space game. It had a limited print run in 2009 and sold out quickly. It was published by White Wolf with a $75 price point and has never been reprinted.

How rare is it? Amazon.com doesn’t even list it. This week, eBay has precisely zero copies for sale. If I hadn’t seen a copy with my own eyes, I would have doubted its existence (in fact, for several weeks after the auction, I did doubt its existence.)

Patience, as always, is the collector’s friend. A few used copies eventually did come up on eBay — all with starting bids well over a hundred bucks. I didn’t bite. I played it cool. I played other space games, pretended I wasn’t interested. Checked eBay listings only at night, under cover of darkness. Spoke casually to other collectors, without signaling real interest. What do you know about EVE Online? Know of any copies for sale? There’s a copy of Panzer Leader in it for you.

Eventually, of course, a copy surfaced on eBay, on June 28th. Brand new and still in the shrinkwrap, just the way I like my rare space games. The starting bid was just $25 — a third of the original price — and a couple days went by with no bidders.

So I moved in, like a shark staking out prey. Made an opening bid. Someone made a counter offer, and quickly ran the bidding up to $39. Damnit, if this is Howard Andrew Jones secretly messing with me again, I’m going to drive down to Evanston with all my Nerf weaponry.

But it turned out well in the end. The auction ended on July 1 and I became the proud owner of a copy of EVE Conquests. Final price: $46. It arrived in the mail a week later and I quickly tore the box open and stared at all the goodies inside.

Ha, ha. I’m joking, of course. It was still in the shrinkwrap, do you think I’m crazy? I cradled it in my lap and sang happy songs to it as I rocked back and forth in my big green chair.

Instead of opening it, I contented myself with pictures of what’s inside the box. Like this one: 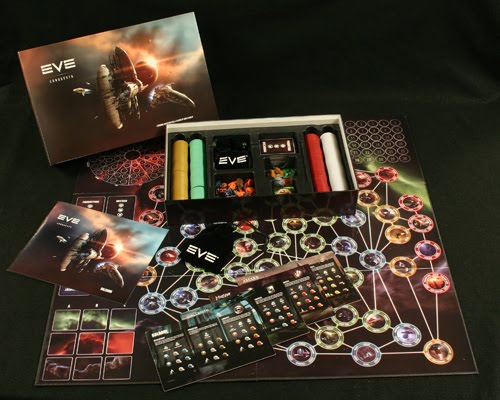 Doesn’t that look great? Super great. I also read the text on the back of the box five times.

EVE is a hard-core sci-fi setting, ruthless, cruel, and cold. Set twenty thousand years in the future, the game world presents a human race straining at the boundaries of its own nature. Massive empires have risen to envelop vast areas of space, each aiming to shape the universe according to its own unique vision.

EVE: Conquests is a strategy board game for 2-4 players set in the EVE Universe. Players assume the roles of the four major empires in EVE and set out to prove their superiority by means of planetary domination. Their conquests require them to play the political landscape in EVE, an effort that often leads them to make war on those who defy them. Garnering the influence necessary requires tact and strategic management of resources in all spheres of operations.

Yeah, that all sounds fabulous. The box is currently sitting in a place of honor. In my basement, stacked on top of a bunch of other unopened space games. While I search fruitlessly online for an open copy, so I can actually play it. So far, there are none that I can find.

EVE Conquests is based on the popular Eve Online MMO game. It was published by White Wolf in 2009. The retail price was $75; I bought my copy new for $46.

A month or so ago, I discovered Ticket To Ride (for my iphone and ipad). I am absolutely hooked on this board game port (which 148apps called, along with Carcassone, the best board game port yet for the ipad).

It’s got a simple but enticing strategy underpinning as you use colored cards to build routes between cities. Longer routes with longer stretches (1-6 cards) get you more points.

But not completing a route (through lack of time or your opponent’s maneuvering) reduces your score. So how many routes you select, and which ones, are key elements.

I actually laughed out loud twice while reading post.

One at you think howard was messing with you. And again when i was genuinely surprised to read you actually opened the game, but actually did not.

oh how i weep for the amount of shrink wrapped boardgames in your basement that cry out to be played.

You know, re-reading that first sentence, there were no large-scale space strategy games when I was growing up. Wonder what John’s board game weakness would have been in the seventies?

Or maybe just another session of D&D would fill in…

> A month or so ago, I discovered Ticket To Ride (for my iphone and ipad). I am
> absolutely hooked on this board game port

I was talking to my friend Neil Walsh yesterday, and he was extolling the virtues of the board game version of TICKET TO RIDE. I was immediately tempted to find a copy, although I knew it would be hard to find players to play with.

An iPad version sounds like the perfect solution. Is it a solitaire game, or do you play online with other players?

> oh how i weep for the amount of shrink wrapped boardgames in your basement that cry out to be played.

My children joke that they never have to fret about what to get me for my birthday. They just go into the basement, select a shrinkwrapped game, and wrap it up for me. I’ll never know they didn’t buy me a new copy.

At least, I think they’re joking…

not to answer for Bob…

but the ticket to ride app can be played online through your game center account, local play with other people, pass and play where you use one phone and pass it around the room, OR you can play against up to 4 other computer players.

the simple answer, yes to both.

> there were no large-scale space strategy games when I was growing up.
> Wonder what John’s board game weakness would have been in the seventies?

Tut-tut. There were plenty of ambitious space games in the 70s! A few of my favorites included 4,000 A.D.

And of course GDW’s IMPERIUM:

So there were a few. But of course, nowhere near as many as there are today.

> but the ticket to ride app can be played online through your game center account, local play with other people,
> pass and play where you use one phone and pass it around the room, OR you can
> play against up to 4 other computer players.
>
> the simple answer, yes to both.

“I cradled it in my lap and sang happy songs to it as I rocked back and forth in my big green chair.”

That’s beautiful. All games should be treated like that.

And I already tore the shrink wrap off!

> That’s beautiful. All games should be treated like that.

And if I had my way, all games would be.

> And I already tore the shrink wrap off!

I’m jealous you get to hold the little starship models in your hands, though. Tell us what you think of the game!

This might sound stupid but i’m actually very new to star trek.

I’m only on the second season to next generation and i’m afraid the board game might spoil something for me so i’m going to hold off on playing it for awhile.

And I do still have my copy of Fifth Frontier War.

But John, how do you know that the game is actually inside the shrink-wrapped box?

When I finally opened my copy of Star Wars: The Queen’s Gambit, what was inside?
Twelve pounds of corn cobs.

Until I open the shrink wrap, the game contains BOTH game parts, and corn cobs. Plus, Schrodinger’s cat.

After I open it, the mystery is gone. Why would I do that?

[…] may appear simplistic compared to modern games of empire-building in space, like Eclipse, EVE Conquests, or Empires of the Void. At first glance, they may seem more comparable to fast-action games like […]