I’m still processing all the treasures I brought home from the Games Plus Fall auction on Saturday. Things move fast at the auction, and you frequently have to make a snap decision to make a bid, or lose your chance forever. So more than once I raised my bidding card while thinking “What the heck is that thing?”

That was the case with Among the Stars, a peculiar board game/card game hybrid… that I ended up winning for $16. It wasn’t until I took it home that I was able to puzzle out exactly what it was. (And truth to tell, I’m still not 100% sure. But Amazon has it listed for $69.99, so whatever it turns out to be, my copy was a bargain.)

I expected it to be another 4X game (explore, expand, exploit, exterminate), but it’s quite a bit more original than that. Play focuses on construction of a vast station in space, and there doesn’t appear to be any exploration or combat at all. Several sources refer to the game as 7 Wonders in space, but that doesn’t really help me much, as I’m not familiar with 7 Wonders either. Best I can puzzle out, Among the Stars is an essentially conflict-free game of competitive trading and diplomacy in space, as players strive to build a space station in a galaxy crowded with alien life.

It was a 2015 Origins Awards nominee for Best Card Game. Here’s the description.

Among the Stars takes place in a war-ravaged galaxy where warring alien races have declared peace in wake of a threat with the potential to destroy them all. An alliance is established to build space stations throughout the galaxy in order to promote trade among the races, strengthen diplomatic relations and defend against this impending threat. Each player takes the role of one of those races trying to build the greatest space station. Through card drafting, the players select locations and use these to build their station, scoring victory points based on the placement. The construction lasts four years and the alien race with the more points at the end wins.

Among the Stars was developed and originally published by Artipia Games in 2012, and reprinted by Stronghold Games. 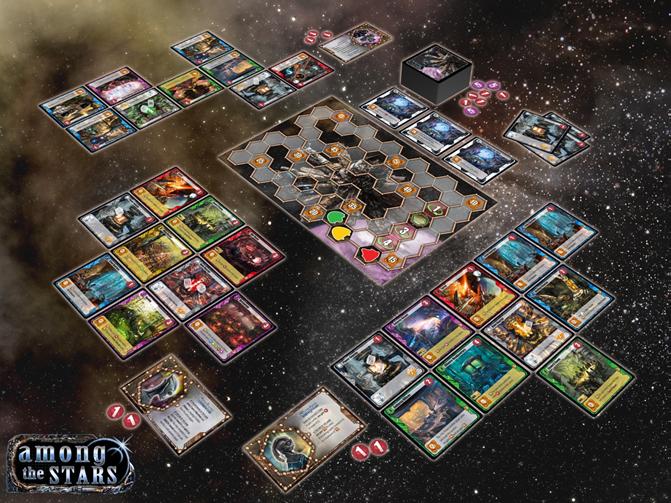 It’s been successful enough that it’s spawned a large number of expansions, with new locations and spaceships (Revival), new components and promotional items (Expanding the Alliance), rules for 5 and 6 players (The Ambassadors), miniatures (Miniatures Pack), and even a standalone sequel game (New Dawn). Here’s a few of the expansions.

The reviews I’ve read have been pretty positive, so I’m looking forward to trying out the game, probably with my kids.

Among the Stars was developed by Artipia Games in 2012, and reprinted in a second edition by Stronghold Games. It was deigned by Vangelis Bagiartakis. The base game is for 2-4 players, and lasts 30-50 minutes. It is in print, and retails for $69.99. BoardGameGeek ranks it a 7.2.

Check out all our latest Game coverage here.