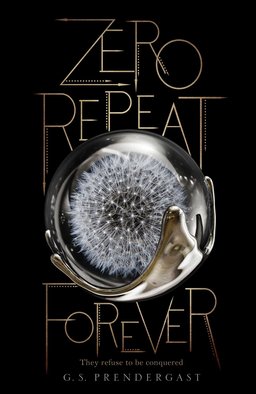 The flood of YA fantasy that washes up at the foot of my big green chair every week is starting to all sound alike. The covers look alike too, all these big fonts on stark, sculptured backgrounds.

It was the strikingly different cover to Zero Repeat Forever that first drew my attention. Enigmatic and beautiful, it stood out from all the other YA books I’ve seen this month. In fact, it doesn’t look like any book I’ve ever seen. The title, nearly as enigmatic as the cover, intrigued me too, and I flipped it open to read the inside jacket flap with real curiosity. It’s the tale of the end of the world, an invasion of deadly creatures… and a sixteen year old girl who doesn’t intend to take things lying down. I like it already.

He has no voice or name, only a rank, Eighth. He doesn’t know the details of the mission, only the directives that hum in his mind.
Dart the humans. Leave them where they fall.
His job is to protect his Offside. Let her do the shooting.
Until a human kills her…

Sixteen-year-old Raven is at summer camp when the terrifying armored Nahx invade. Isolated in the wilderness, Raven and her fellow campers can only stay put. Await rescue. Raven doesn’t like feeling helpless, but what choice does she have?

Then a Nahx kills her boyfriend.

Thrown together in a violent, unfamiliar world, Eighth and Raven should feel only hate and fear. But when Raven is injured, and Eighth deserts his unit, their survival comes to depend on trusting each other…

G. S. Prendergast is the Canadian author of two novels in verse, Audacious and Capricious. This is her first prose novel.

Zero Repeat Forever was published by Simon & Schuster on August 29, 2017. It is 487 pages, priced at $17.99 in hardcover and $10.99 for the digital edition. The marvelous cover was designed by Lizzy Bromley. Read an excerpt at Hypable.