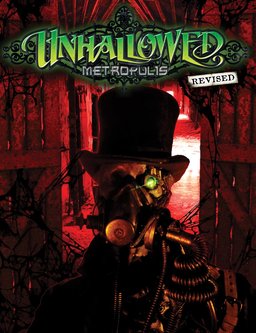 The dark fantasy role-playing game Unhallowed Metropolis was published by Eos Press in December 2007. I never got a copy, but I sure heard about it.

The game was updated in 2011 with Unhallowed Metropolis Revised, which features new art, a foreword by Kenneth Hite (Trail of Cthulhu), streamlined rules, complete rules for volatile psychics and spectral entities, details on the wonders of aether technology, and much more. I bought a copy last month at the Fall Games Plus auction, and settled in for a read through today.

So far, I’ve been very impressed. The world building is strong indeed, and the setting splendidly realized. The art is a mix of pen and ink work and black & white photos of some very talented cosplay (the credits list 37 models, two make-up artists, and four photo manipulation artists… a pretty major production, no matter how you look at it).

All that effort has paid off. Unhallowed Metropolis Revised sucks you into the game world in a way I haven’t experienced since Ashen Stars. This is a game that makes you ache to play it. 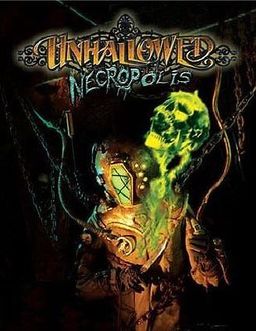 So far, there’s been one supplement, Unhallowed Necropolis, a supernormal source book that details the secret history of the supernormal and introduces ghosts, psychics, and mediums to the Neo-Victorian World.

Atomic Overmind Press also publishes a semi-regular magazine with supporting material for the game, Gasmask Gazetteer. So far, four issues have been released since February 2012.

Here’s the blurb on the back of Unhallowed Metropolis Revised:

It has been two hundred years since the first outbreak of the Plague, when the dead rose to feed on the flesh of the living. Countless millions perished in the chaos that followed. It was the dawn of a new dark age.

London, the capital of the Neo-Victorian Empire, is a vast, densely crowded city. Beneath the towering walls and crackling Tesla towers, where the fallout of a thousand crematoria darkens the streets, ten-million souls live in squalor. Predators, human and inhuman, stalk the slums and rookeries, preying on the unwary and the helpless. Beneath the haunted streets, resurrection men and body snatchers hock their grisly wares at blood-stained meat markets. Their clients are degenerate ghouls and amateur anatomists who practice the outlawed science of reanimation. Driven by an insatiable hunger for immortality, physicians search tirelessly for the elixir vitae, the fabled alchemical solution that promises life eternal and a cure for the Plague. Above it all, the aristocracy looks down, pristine and enduring behind their walls of privilege, but preyed upon by dangers more insidious than those that infest the streets.

Even in this time of darkness there are those with the strength to fight. Undertakers, Mourners, soldiers, and scientists do battle with the horrors of the age, keeping a solemn vigil over the Unhallowed Metropolis.

Unhallowed Metropolis Revised was written and created by Jason Soles and Nicole Vega, and published by Atomic Overmind Press on September 26, 2011. It is 335 pages, priced at $39.95, and still in print. I bought my copy at auction for $15. Check out the Atomic Overmind Press website here.

[…] Wizard of the Coast’s epic fantasy game Conquest of Nerath, the wonderfully creative Unhallowed Metropolis from Atomic Overlord Games, and a used copy of Eclipse – but Outbreak: Deep Space is the […]