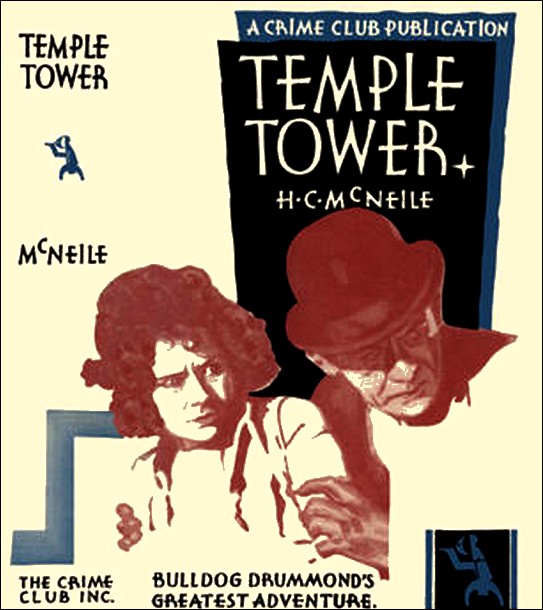 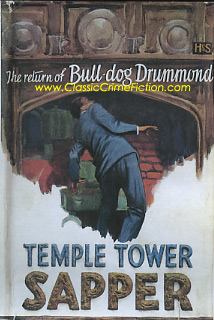 Temple Tower (1929) was the sixth Bulldog Drummond novel and marked a departure from the series formula. Having killed Carl Peterson off at the conclusion of the fourth book and dealt with his embittered mistress Irma’s revenge scheme as the plot of the fifth book, Sapper took the series in an unexpected direction by turning to French pulp fiction for inspiration.

Sapper also placed Hugh Drummond in a supporting role and elevated his loyal friend Peter Darrell to the role of narrator. The subsequent success of the venerable movie series and the future controversies generated by Sapper’s reactionary politics and bigotry obscured the versatility of his narratives and led to his being under-appreciated when considered with his peers. 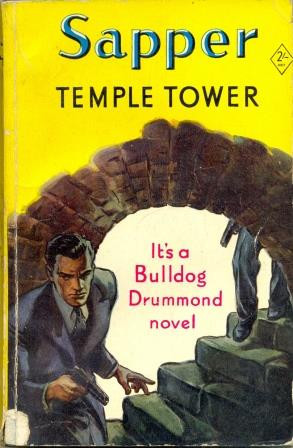 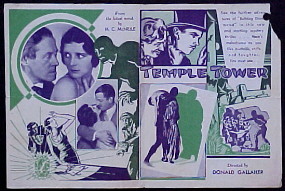 These influences led Sapper to shape Temple Tower, a ruined castle on Romney Marsh which brings together a number of former Apaches, Le Bossu Masque [“The Masked Hunchback”], Le Rossignol [“The Nightingale”], and Le Crapeau [“The Toad”] in a quest for revenge and recovery of stolen Russian royal treasures.

While the influence of Sherlock Holmes’s arch-nemesis, Professor Moriarty, was evident with the development of Carl Peterson, Temple Tower takes its inspiration from Sir Arthur Conan Doyle’s Holmes novels by filling a large section of the book with a flashback explaining the back-story. As characters, our colorful Apaches are painted as larger than life monsters. Sapper wrings genuine thrills from his villains and the situations, but the shift to a strong French pulp influence is almost jarring when compared with the other entries in the long-running series.

Where Sapper leaves his mark is in presenting an unreliable narrator for the flashback in the form of the familiar genre character of the sympathetic police detective. Victor Matthews follows on from a long line of such expected characters in the series, so it comes as a genuine surprise to the reader to learn he is not all he claims to be.

Temple Tower stands as one of the best-written books in the series, even if Hugh Drummond largely takes a backseat until the climax. A flaw that dogged the earlier books in the series reappears as Sapper was reluctant to portray female characters in a realistic fashion after the initial story in the series. If they are not to be traditional damsels in distress, women must be sidelined, as Hugh and Peter’s wives are for this adventure.

Part and parcel with the Boys’ Own Adventure formula, the series relies upon finding excuses to assemble the gang (or portions thereof) once more for another “jolly exciting episode.” While aspects of all of Sapper’s fiction have dated badly, they retain their period charm and are well worth revisiting for anyone who enjoys classic pulp or recognizes its largely unsung influence in contemporary entertainment.