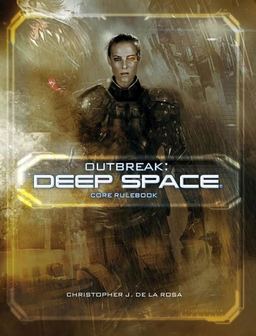 Being at the Games Plus Fall Auction can be an exhilarating experience. Take my discovery of Outbreak: Deep Space, just as an example.

There I am, sitting in the second row of the auction on October 4th, ninety minutes into the auction, wondering if I’ve blown my budget already. I’ve just made the decision to add up my purchases when the auctioneer holds up a brand new copy of Outbreak: Deep Space and starts the bidding at $5.

What the heck is that?, I think. And then, I have no idea, but it looks fantastic.

I immediately hold up my bidding card. Unfortunately, I’m not the only one to be intrigued by this strange gaming artifact. About a dozen bidders have their cards in the air, and the auctioneer quickly runs the price up to ten bucks. This is how you get in trouble, I remind myself. Bidding like mad on a book when you have absolutely no idea what it is.

But my card stays in the air. The bidding hits 15 bucks, then blows past it. The cards around me are starting to waver and drop.

This thing could be on sale at Amazon for $10. Just because you’ve never seen a copy doesn’t mean it’s hard to find.

But I keep my card in the air. It’s a sharp-looking and professional bound hardcover — my instincts tell me it’s going to cost a lot more than 10 bucks to track down a copy if I miss out on this one. And besides… there’s more going on now than just bargain hunting. It looks like a science fiction horror RPG, and a very professional one. I’m deeply curious and willing to pay more than $15 for the opportunity to find out what it is.

The bidding hits $20. I grit my teeth and decide to commit for the long haul. And at that moment, the auctioneer calls out my card number. “Sold to #155 for $20!” 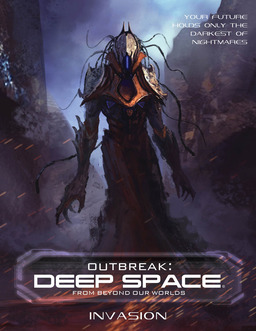 So I take home a copy of Outbreak: Deep Space. It’s brand new — the spine cracks as I open it. I bring home several other treasures — including Catalyst Game Labs’ steampunk battleship game Leviathans, Wizard of the Coast’s epic fantasy game Conquest of Nerath, the wonderfully creative Unhallowed Metropolis from Atomic Overlord Games, and a used copy of Eclipse — but Outbreak: Deep Space is the gem of the lot.

The first thing I do when I get home is look up the game on Amazon to see if I did, in fact, get a bargain. But Amazon can’t tell me — it’s not even listed. Well, that helps explain why I never heard of it.

That’s the last piece of the puzzle. Kickstarter, I’ve found, is a marvelous platform to allow creators to connect with backers and get their dream projects funded. But as far as I can see, it’s frequently a lousy way to market a product. Outbreak: Deep Space was successfully funded and shipped on time — roughly two months after the campaign closed, give or take — and it’s one of the best-looking RPGs to come on the market this year. But all of that, as commendable as it is, is still no substitute for a decent marketing campaign, and so far the game seems to have flown well below the radar of much of the mainstream hobby press.

Well, let’s see what we can do to remedy that. I’ve been able to spend some time with the game, since I purchased it back in October, and overall I’m very impressed.

Outbreak: Deep Space has been described as a military sci-fi survival horror game, and I think that’s an accurate description. There are some terrific science fiction role playing games out there today, including the classic Traveller, Ashen Stars, and the marvelous Rogue Trader, but Outbreak: Deep Space has a very different emphasis than any of those. The focus isn’t on exploration or commerce. It’s on simple survival, in the face of overwhelming horrors from the depths of space. Think of it as an RPG distillation of the movie Alien, or the video game Dead Space. 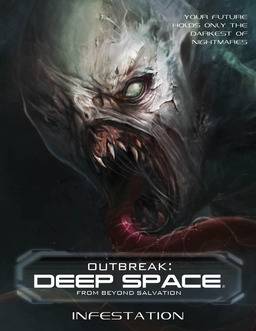 What does that mean? Well, it means that you’ll still get all the great sci-fi gear you also get in games like Ashen Stars and Mindjammer — things like stun batons, plasma rifles, flamethrowers, and even railguns. But you’re also going to have to deal with the effects of paralyzing cosmic horror on your characters. It’s like Lovecraft in space.

Outbreak: Deep Space doesn’t include one measurement of how horror affects a character, like Call of Cthulhu‘s famous sanity stat. Instead, your characters have to keep track of their morale, insanity, psychological trauma, psychosis, therapy, regression, mental trauma, and more. You tell me how important horror is to the game mechanic.

Infestation –
Creatures who mutate or bend the laws of nature, be it man-made or extraterrestrial.

Invasion –
Aliens with vastly superior technology to our own. This isn’t war, it’s slaughter.

Trans Dimensional –
Vast Horrors from another reality, bending time and space and twisting the minds of man in its wake.

Pretty creative stuff. I haven’t had the time to train my kids and role play a session yet, but believe me, I’m very tempted. The rule book is well written and cleanly laid out, with just enough detail to add color to the setting. The art — much of it in color — is top notch, and the design is excellent.

Outbreak: Deep Space occupies an almost-unique niche in the RPG field. The only game I can think of that takes a similar military focus, and also offers a dark-future, monster-ridden space setting, is Cold and Dark from Chronicle City.

There are a few blemishes. I was hoping for a sample adventure in the back of the book to get a sense of the game, for example, but no such luck. However, there’s already some support material available on the website, including a 9-page adventure, The Terramartian Campaign. Check it out here.

Overall, I’m tremendously impressed. These folks know what they’re doing and the game deserves a wider audience than just its 200 Kickstarter backers. If you’re looking for an innovative and exciting new science fiction RPG — or an upstart new design firm worthy of your support — I encourage you to check it out.

Our most recent coverage of science fiction role playing games and products includes:

Outbreak: Deep Space was written by Christopher J. De La Rosa and published in August 2014 by Hunters Books and Apparel. It is 240 pages in hardcover, priced at $44.99. DriveThruRPG also sells a watermarked PDF version for $16.99.