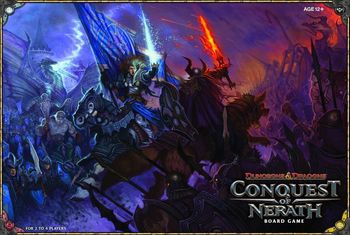 When I lived in the dorms at the University of Illinois in the early 90s, it wasn’t unusual to see students clustered around tables in the lobby, playing Axis & Allies. The game took up an entire table and there were always a few spectators. Axis & Allies was a massive game, with a truly epic feel, and in the decades since its release, it has seen many versions — 19 last time I counted.

I’ve often wondered why there was no fantasy equivalent to Axis & Allies: a fast-playing game on a massive scale, pitting nations against each other across an imposing map. Sure, there have been a few ambitious attempts from small companies, but most fell down on the production side of things. Axis and Allies wasn’t just huge in scope — the whole game was huge, with hundreds of sturdy components, a beautifully detailed 40-inch folding map, and simple yet elegant rules. Even the box was humongous.

In 2011, Wizards of the Coast released Conquest of Nerath, a Dungeons & Dragons board game that pits four nations against each other in a desperate struggle for total supremacy. I probably would have overlooked it, if it hadn’t been for this rave review by Scott Taylor in July of that year:

In all my years of gaming, and all the games I’ve played, I’d yet to find something in the same realm of awesome as [Axis & Allies] until I sat down to play Conquest. Simply put, this game is an instant classic, a pure gamers paradise that mixes the very best of thirty years of game development into a single cohesive unit. What A&A was as a Risk upgrade, so too is Conquest to everything before it.

I was very excited by Scott’s review, and promised myself I’d buy a copy as soon I could. I finally acted on that promise earlier this month and, after spending some time with the game, I’m very pleased to be able to say that Scott was not off in his assessment.

Conquest of Nerath is a game of fantasy strategy. 2-4 players — representing the the undead legions of the Dark Empire of Karkoth, the human kingdoms of the League of Nerath, the infernal goblin hordes of the Iron Circle, and the elves and corsairs of Vailin — gather armies, siege engines, monsters, warships, elementals, and dragons to crush their opponents.

In addition to armies, players field knights, wizards, and other heroes to lead their troops, and also to explore the legendary dungeons scattered across the lands in search of magical items that will tip combat results in their favor.

And I do mean “legendary.” Just a few of these dungeons on the map include The Tomb of Horrors, the Lost Caverns of Tsojcanth, White Plume Mountain, the Temple of Elemental Evil, the Vault of the Drow, the Sunless Citadel, and the Trollhaunt Warrens.

I think that’s neat. Yes, the dungeon-delving aspect of Conquest of Nerath is fairly simplistic (none of these dungeons has a map, for example) and in truth the names are really just so much window dressing. But Conquest, like D&D itself, is still a game of imagination — and there’s a thrill of fear when you send your heroes into the Tomb of Horror for the first time, trust me. 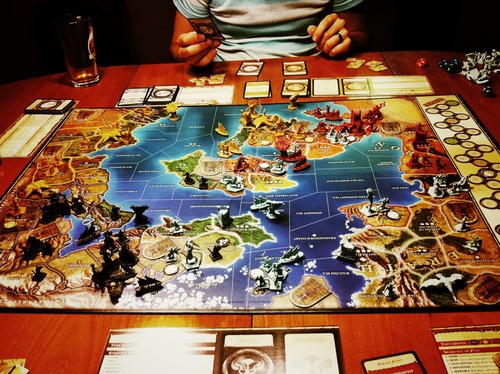 Just like Axis and Allies, the game comes in an imposing box, and the components are top notch. The map is gorgeous, and that big ‘ole box also includes a color rulebook, two fistfuls of dice, 80 Event cards (20 per faction), 30 Treasure cards, and 252 plastic playing pieces representing the champions and armies of the four factions.

The plastic pieces are detailed and durable, and entirely serviceable.  But yes, it is possible to substitute D&D minis in the game, especially for the dungeon monsters. 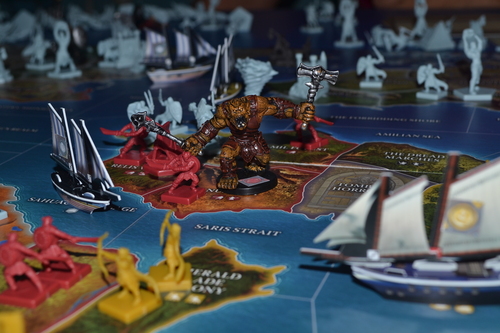 Are there are drawbacks? Well, yes… those quality components and huge scope we demanded come with a price tag. Like Axis and Allies before it, Conquest of Nerath is an expensive game (which is why it took me so long to get a copy.) But it’s definitely worth the investment.

I’m still learning the game, and have yet to play a three or four-player contest. But already I can see the streamlined rules are easy to pick up, and the dungeon delving adds some nice flavor. Once I get a few more sessions under my belt, I’ll report back here with more detail.

Conquest of Nerath was published in June 2011 by Wizards of the Coast. It retails for $79.99; several online retailers sell it for under $50 (including shipping.)

When I was in college (late 1980s), my friend was part of a group that occasionally played Advanced Squad Leader. Well, my understanding is that occasionally they’d go into one of the buildings on a weekend, take over an empty classroom, spend the entire weekend setting up the map, then have to disassemble everything Sunday evening after having completed maybe two turns.

I bought this off of ebay a couple years ago but haven’t played it yet. I love the concept.

Do either of you remember the Seinfeld where Kramer and Newman were playing RISK and didn’t trust each other with the board so they took it on the subway where Kramer said that Ukraine was weak and a Ukranian on the train took offense and destroyed the board. 🙂 You loved that if you’ve ever played epic board games that take days to finish.

Them carrying it all over the place was funny as well.
http://www.youtube.com/watch?v=fzLtF_PxbYw

I also recall playing Risk in college, and games inevitably devolving into a two-person slog-fest where you’d alternate sweeping across the board until one person could cash in cards two turns in a row.

> When I was in college (late 1980s), my friend was part of a group that occasionally played Advanced Squad Leader…

The things love of gaming will drive you to. 🙂

When I was in grad school in the early 90s in Illinois, my gaming group was scattered across nearly 1,000 miles. We would meet roughly in the center (Waterloo, Ontario) on long weekends. We’d find an empty classroom, and game late into the night Friday and Saturday. Sunday, back into the car for my 10-hour drive back to the University of Illinois.

And you know… those were some of my best gaming memories. You get out of it what you put into it, I guess.

> I bought this off of ebay a couple years ago but haven’t played it yet. I love the concept.

I love the fact that the rules are so simple. It’s a grand, expensive game, but that doesn’t mean it’s complicated or hard to learn.

Okay, I never saw that episode… but that clip was funny!

> I also recall playing Risk in college, and games inevitably devolving into a two-person slog-fest
> where you’d alternate sweeping across the board until one person could cash in cards two turns in a row.

Yeah — Risk always started out as a game of strategy, and then ended as a card game. 🙂 Still, it was a lot of fun.