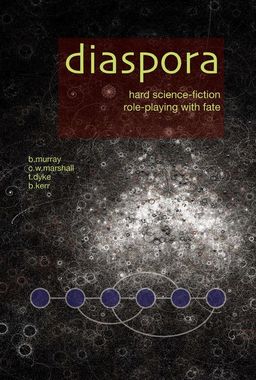 This weekend, I shall be attending Conpulsion, the massive yearly gaming convention held in Edinburgh, Scotland. Mostly, I’ll be teaching a plotting and outlining workshop and demonstrating Historical European Martial Arts. If you’re attending, keep an eye open for me! (I’m the tired dad with the swords.)

FATE is basically the Linux of the gaming world. Its core system is a product in its own right, but people are also free to base their own systems on it, a classic example being the award-winning Hard SF Diaspora.

Articulate, sometimes witty, always enthusiastic, both these roleplaying games appear to have been written by grown-ups who like roleplaying more than they like rules, but still want their roleplaying to be an actual game.

It helps that the core FATE system abstracts everything to four basic actions — Overcome, Create an Advantage, Attack, and Defend — and five categories of parameters — Aspects, Skills, Stunts, Stress Tracks, and Consequences.

This means that, instead of yesteryear’s lovingly created baroque edifices of subsystems, FATE games are as recursive and intuitive as a modern software package. For example, characters, weapons, ships, and space ships all have the five kinds of parameters and can be involved in the four actions.

FATE Core lends itself easily to pick up games. Last weekend, armed with a one-page dungeon adventure and some hastily created “Fudge Dice,” I GM’d my son Kurtzhau and DeeM (both 10) and Morgenstern, my daughter (6!).  The character generation was a hoot (much like my experience with Diaspora) and gave us respectively a disillusioned veteran mercenary, a thief masquerading as a squire, and an axe-wielding barbarian princess. The resulting Aspects, especially “Can’t abide an unfair fight,” “Nobody runs from my crossbow,” and “I like shiny things,” generated drama and dilemmas without much effort on my part. In truth, the party got nowhere near the dungeon, but did have to flee a warlord after the thief stole his magic gem.

Aspects have an interesting effect on play. Acting on an Aspect when it’s to your disadvantage earns you a Fate Point, which validates taking actions that would otherwise be shouted down by the other players. For example, in my old AD&D group, we would have been furious if a player’s thief character derailed the adventure. However, in FATE, this is not only mandatory, it is cheered on.

The bulk of the FATE system is so abstracted that it’s easy to adapt to any setting, replacing equipment lists with narrative and the ubiquitous Aspects. It’s also easy to make up your own equipment lists and tweak the rules to fit your vision.

This begs the question: Why bother with a third-party commercial implementation of the game?

Diaspora’s answer is to offer you well-worked out and play-tested mini-games and design systems embedded in a story world.

First, as a 40-something coming back to gaming, I am stunned by the sheer value for money. Back in the day, you’d have to pick up several supplements to get all that. I’m also impressed by the consistency and recursion. There’s pretty much no overhead to grabbing any of these mini-games and settling down for a quick battle.

The mini-games themselves are great fun and naturally generate story.

Personal Combat gave me, Gamer Dad, and our sons an awesome firefight, resulting in a disrupted chess game, broken bones, and a botched intelligence operation. As per FATE, this mini-game handles movement and range in terms of a patchwork of Zones; basically, instead of measuring or using hexes, the GM simply divides up the space pretty much like in a game of Diplomacy. This is quick and intuitive and formalizes what most GMs have always done anyway. The Platoon Combat takes this further, but I haven’t tested this yet.

Ship Combat allowed Kurtzhau and myself to spend a glorious afternoon designing convincing ships and then fighting them. Diaspora abstracts range and velocity along pretty much the way that the old Traveller Highguard did, using a single linear scale from -4 to +4, but doesn’t fiddle with different weapon systems. Instead, it’s down to your ship’s quirks (Stunts), its basic abilities, and a choice between getting in close with beam weapons or standing off with torpedoes. Though there’s a high level of abstraction, the effect is to force you to make real and realistic-feeling tactical decisions. For example, winning maneuver rolls lets you move other people’s ships between the bands. Which of your whirling enemies do you want to close with?

Again, the results always generate cool narrative. For example, my hi-tech attack ship all but crippled both Kurtzhau’s lower-tech system defense ships, but in doing so sustained so many torpedo hits it vanished in a ball of plasma. It all felt very Honor Harrington.

I’m looking forward to trying out the Social Combat, which is a mix of the Platoon and Ship combat rules applied to any human situation. Again, you have Zones and the ability to move other characters between them, but this time they represent things like intimacy (in, say, a seduction) or political position (in a election campaign).

I’m left with a dizzying sense that almost anything is possible in the Diaspora universe. Just by Making Stuff Up, I can GM games with action ranging from the minor and obscure, e.g. bar brawls, through to massive political and diplomatic upheavals.

“Back in the day”, e.g the 1980s, GMs did Make Stuff Up, and people experimented with freeform systems. I was never comfortable with this. Partly, I liked my game to be an actual game, with decisions to make and risks to manage, rather than collaborative storytelling at the whim of the GM. Mostly, though, I noticed that the cooler players — for 1980s gamer values of “cool” — tended to dominate the play.

FATE and Diaspora aren’t the only modern systems to get around this. However, they do do it very well. The collaboration generates the action and the result tends to be a good story. But in between, there are hair-raising moments when characters take their chances and the dice rattle.

So, in short: buy FATE Core if you like improvising your own settings and enjoy pickup games. Buy Diaspora if you want to enjoy exploring a Hard Science Fiction universe and don’t have much patience for fat rule books and fiddly minutiae.

M Harold Page (www.mharoldpage.com) is a Scottish-based writer and swordsman who is enjoying introducing his kids to geeky pursuits. His historical adventure yarns are all available on Amazon. The most recent one has Vikings in it.