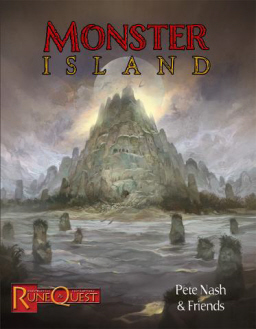 I’ve been on a bit of a RuneQuest kick recently, inspired by my purchase of the incredible Pavis: Gateway to Adventure setting from Moon Design.

I honestly didn’t expect to encounter anything comparable to Pavis any time soon. But I didn’t reckon with The Design Mechanism and their equally ambitious campaign setting Monster Island — a massive and mysterious island which invites gamers to “delve back to a time of classic Sword & Sorcery with priceless jewels, fierce dinosaurs, and dark horror!”

Monster Island is precisely the kind of fully realized and adventure-packed product I wish I’d had when I first tried RuneQuest years ago. It’s a marvelously imaginative sandbox setting, complete with strange monsters, dangerous ruins, giant (and I do mean giant!) beasts, and even greater surprises. Why hasn’t anyone thought of this before?

Author Pete Nash dedicated the book to two people, both of whom we lost this year: legendary Chaosium editor Lynn Willis, “who was my mentor and gave me my start in gaming,” and filmmaker Ray Harryhausen, “whose monsters have never been surpassed. Both of you spurred my imagination and haunted my dreams…. this book is a fruition of your influences.”

Imagining a fusion of the brilliance of Chaosium’s best adventure modules — including Cthulhu By Gaslight, the award-winning Masks of Nyarlathotep, Thieves’ World, and Shadows of Yog-Sothoth — and the unfettered imagination of Ray Harryhausen is as good a way as any to describe Monster Island, a true adventurer’s paradise packed with mystery, danger, and constant surprises.

Underneath the gorgeous cover by Jon Hodgson (click on the image above right for a full-sized version) is a well laid-out and designed book, with plenty of attractive interior art and a detailed breakdown of the island’s history and cultures, various settlements and places of interest, and more than 100 new monsters. The print version also comes with a full-color, fold out map.

Here’s the complete back cover text:

Imagine a land of dark, sweltering jungles filled with nameless monstrosities and savage reptilian head-hunters… hacking through thick undergrowth to uncover forgotten overgrown ruins filled with glittering treasures… discovering mysterious cities of gold hidden high up between the sheer mountain peaks, filled with foul sorceries… uncovering ancient temples still used by secretive cults to practice their abhorrent sacrifices… and worse still, if those gods arose as titanic beasts beyond mortal comprehension, to destroy those that dare despoil their worshippers…

Then imagine you’ve arrived, shipwrecked or magically transported, to this tropical hell and that there is no escape. Welcome to the horror of Monster Island!

Monster Island is a fully detailed sandbox setting which can be used in almost any existing campaign, from Swords & Sorcery through to 1930’s Two Fisted Pulp. It contains enough material to run a game for years, including:

With its foetid secrets and gritty adventure, the comprehensive content of Monster Island is guaranteed to inspire any Game Master. Delve back to a time of classic Sword & Sorcery with priceless jewels, fierce dinosaurs and dark horror!

Monster Island is an adventure setting for RuneQuest Sixth Edition, written by Pete Nash and Friends and published by The Design Mechanism. It is 296 pages in oversized trade paperback, priced at $30 Canadian for the print edition and $14.99 for the PDF. Order directly from The Design Mechanism website or via DriveThruRPG.

[…] adventures, from Gygax’s classic The Temple of Elemental Evil; to the home of King Kong, Monster Island; to the ruins of Parlainth, an ancient capital that vanished from the face of the Earth; to Call […]

[…] by TSR BattleTech: The Crescent Hawk’s Inception by Infocom Cold and Dark, from Chronicle City Monster Island, by The Design Mechanism Traveller: Fate of the Kinunir by Far Future Enterprises Star Explorer by […]