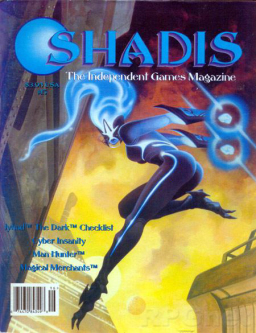 A few weeks ago, I stumbled on an eBay seller unloading a nice collection of vintage gaming merchandise. Quite a bit of it sold at high prices too, especially TSR’s Dragon Dice sets and several classic D&D modules in mint condition.

There wasn’t much interest in them, to be honest. In some cases, it wasn’t really a surprise. The lots were oddly bundled — one contained eleven magazines, including four copies of Games Quarterly #7 and six copies of Game Trade Magazine #125.

I couldn’t figure out why the seller didn’t split those up into different lots. Who on Earth would want six copies of GTM #125?

I won most of the lots for between one to two bucks each, answering my own question. I now own six copies of GTM #125 — and 52 other vintage gaming magazines published between 1982 and 2012.

There’s a lot of great reading and gaming history in there. I was especially pleased to see Sorcerer’s Apprentice, White Dwarf, and Arcane, all of which are highly collectible today.

But the real delight, of course, was the single issue of Jolly R. Blackburn’s marvelous Shadis: issue #15, cover-dated Sept/Oct 1994, one of the most famous issues of the magazine ever published — and indeed, one of the highest selling single issues of any gaming magazine of the 90s.

[Click on any image in this article for a bigger version.]

For much of its brief life, from 1990 to 1998, Shadis was my favorite gaming magazine. It was started as a wholly independent gaming publication while Jolly was still in the army, and he assembled most of the early issues on his kitchen table. The publishing company he started to produce it, Alderac Entertainment Group, was named after his AD&D campaign world.

I found the magazine unique for its splendid and diverse focus on RPGs. Unlike, say, Dragon magazine — which focused heavily on AD&D at the time — I could count on a typical issue of Shadis to have one or two articles for other RPGs I enjoyed, like Traveller, as well as a host of pieces on games I was curious about.

Issue #15, for example, has material for ManHunter, Cyberpunk 2.0, Jyhad, and many other games, plus coverage of popular play-by-mail games, miniatures, and much more.

And like the early Dragon, Shadis was packed with intriguing advertisements from gaming companies large and small, teasing readers with a tantalizing array of new titles.

But Shadis was also famous for an industry-changing promotional offer it made with this issue, with truly astounding results. Here’s Jolly, from his editorial:

By now you’ve noticed some strange changes in your typical issue of Shadis. Undoubtedly, you had to rip your issue out of its polybag confinement, only to find a pack of cards inside.

Last issue we announced that Issue #15 of Shadis would have two, unique Magic: The Gathering cards inserted in it. This was based on the promotional card program Wizards of the Coast had announced shortly before press time on the last issue.

Advance orders on the issue suddenly exploded. Three days after the announcement, over 120,000 issues had been ordered! A few days later the subscription checks began to pour in at a phenomenal rate. Magic-mania had hit home in a BIG way.

The timing for the promotion couldn’t have been better: in 1994, interest in Magic: The Gathering, the first collectible card game, was reaching its peak, with players impatiently waiting for new sets and collectors paying insane prices for rare cards of all kinds.

Even so, 120,000 is a stunning number for a small-press gaming magazine. With one promotion, Shadis had vaulted into the big leagues, outselling virtually every other magazine in the industry.

Ultimately, Wizards was forced to modify the offer, changing it from unique cards to preview cards for upcoming expansion packs. To compensate subscribers for the change, Jolly purchased 15,000 Legends cards, breaking open over a thousand booster packs and inserting those cards randomly into the issues — even going through the trouble of getting a hundred cards autographed by the artists at GenCon before randomly inserting them. 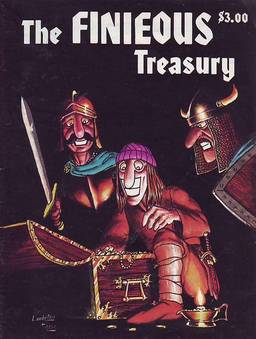 Not too surprisingly, issue #15 was hardly the last time Shadis had a card insert. Despite the problems associated with the first one, they repeated a card promotion with the very next issue (with a Dark card insert), and inserts gradually became a regular part of the magazine.

As groundbreaking as that was, the Magic inserts aren’t even the primary reason Shadis is famous. No, its great claim to fame comes from an unassuming comic Jolly first created to fill an unexpected blank page in the layout of the second issue: Knights of the Dinner Table.

KoDT first appeared in the back of issue #2 in March 1990. Jolly was inspired by J.D. Webster’s brilliant Finieous Fingers from the back of The Dragon magazine, and his strip, which followed the adventures of a hapless gaming group in Muncie, Indiana, had the same laugh-out-loud flavor. It continued for three issues before Jolly replaced it with other comics.

It wasn’t long before readers clamored for the return of KoDT however, and Jolly brought it back for the eighth issue of Shadis, where it stayed until issue 21.

After that, the strip moved to Dragon magazine, where it remained for four years.

In 1994, Aldarac began publishing Knights of the Dinner Table in their own comic. Issues 1 and 2 are advertised in the copy of Shadis #15 I’m holding in my hot little hands, in fact. I bought both of them at a convention in Chicago; those early issues had a tiny print run, and are now highly prized by collectors.

Shadis magazine continued until 1998, winning the Origins Award for Best Professional Gaming Magazine for three years running, in 1994, 1995, and 1996. 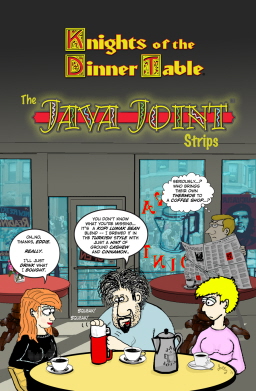 I first discovered it in the early 90s, taking advantage of a back issue sale and even writing Jolly Blackburn a fan letter. Shadis brought the fun back into roleplaying for me in a way that no other magazine did, and I expressed that as best I could in my brief letter. Jolly was kind enough to include a response in the packet of back issues he shipped back to me.

I met Jolly for the first time just a few years later, after he had left Shadis and taken his comic to Kenzer & Company. Through an incredible coincidence, David Kenzer worked as an attorney just a few feet down the hall from me in the Schaumburg , Illinois offices of Motorola, where I was employed as a Business Operations Director from 1997 to 2002.

Dave and I quickly became friends, and I ended up regularly gaming with him and Jolly — and working on numerous projects with both of them, including a book review column I wrote for Knights of the Dinner Table for nearly four years, a Kingdoms of Kalamar product I co-wrote with Ed Greenwood and, most importantly, the KoDT spin-off comic The Java Joint, which appeared in the back of virtually every issue of the print version of Black Gate.

Java Joint was eventually collected in an omnibus reprint volume, which is now sadly out of print (although PDF copies are still available.)

As for Shadis, it is no longer being published, and the industry is poorer for it. It was an incredible magazine, with the joy and wonder of role playing spilling off of every page. I’m glad we had it for as long as we did, and back issues are still available at various online outlets, including eBay.

Shadis #15 was published in August 994 by Aldarac Entertainment Group. It was 112 pages, with black and white interiors and a cover price of $3.95. The cover was by John Zeleznik. I bought my copy (sans card inserts) in a lot of magazines for $1.50.

I think I have a couple issues of Shadis somewhere in the boxes, although neither of the two listed. I did get the Java Joint trade last time it was mentioned; good stuff!

But what I really, really want is that Fineous treasury. And a Wormy collection, in full color, of course.

I know what you mean. I wouldn’t part with my copy of The Finieous Treasury for anything.

I’m sure it was a good seller for TSR at the time, and plenty of copies were printed. At any given moment there are a handful for sale on eBay; they usually sell for anywhere from $15 to $45, depending on condition.

If it helps, I found J.D. Webster’s comic to be unmissable when it appeared in the Dragon — it was the very first thing you read when your issue arrived. But as a sustained narrative, it wasn’t quite as enjoyable.

Finieous Fingers was a a terrific gag strip, laugh-out-loud funny, but the strips didn’t hold together at length. It was very much a product of its time, as well.

As for Wormy… well, we’d all love a full color collection. That’s one strip that DID hold together brilliantly. But that’s never going to happen. David A. Trampier, the artist who created Wormy, withdrew from gaming in 1988, and most attempts to contact him have been rebuffed (including a friendly offer from Jolly Blackburn). He now drives a cab in Carbondale, Illinois. Scott D at Skyland Games wrote a nice summary of the situation back in February, in his article “The Strange Case of David A. Trampier.”

[…] Saturday’s appreciation of his earlier publication, the much-missed role-playing magazine Shadis, where KoDT first appeared. Or you may remember the last time I shone a spot on KoDT, with issue […]