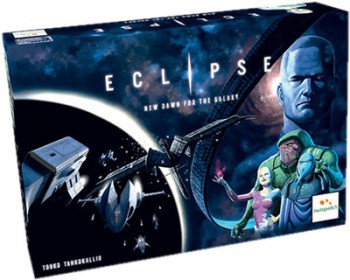 I spent the better part of last year trying to track down this game. I first heard about it via the excited chatter at BoardGameGeek, where it bubbled near the top of their Board Game Rank, displacing such beloved games as Settlers of Catan, War of the Ring, and Civilization.

And, of course, it was no longer available. Released in 2011, the first printing sold out in record time and what few copies were still in the channel were commanding $200 or more. Publisher Asmodee announced it would not be available again until the second edition (which fixed some minor gameplay and production issues) was ready in late 2012.

It was a long wait. And the temptation to spring for one of those rapidly vanishing first edition copies was strong – especially as the year rolled on and there was no sign of the new edition. But patience is its own reward, or something. Anyway, it finally arrived, and I now have a copy in my hot little hands.

Eclipse is a game of interstellar conquest and intrigue, meaning you move starships around a colorful board and blow stuff up. That’s really all I needed to know to want a copy more than life itself. But we have a little room left, so I’ll pad this out by copying some stuff from the back of the box.

Apparently you can play as one of several races. I’m guessing the chubby green guy, blue alien, and bald supermodel on the cover are just a few of the choices. I picture my race of supermodels conquering the galaxy in slender battlecruisers, crushing all opposition beneath their stiletto heels, and suddenly I understand why copies were going for $200. I mean, damn. Now I want two copies.

There’s more to the game than just cruel matriarchal domination and deep-space explosions. Maybe. I assume so based on the components listed on the back, anyway. I haven’t been able to bring myself to open the box (I have a problem with shrinkwrap. Don’t ask).

Inside the nearly 7-pound box are 84 plastic miniatures, a generous assortment of colorful tiles representing the galaxy, over 300 wooden components, 18 dice, 2 cloth bags, and more.

The galaxy has been a peaceful place for many years. After the ruthless Terran-Hegemony War (30.027-33.364), much effort has been employed by all major spacefaring species to prevent the terrifying events from repeating themselves. The Galactic Council was formed to enforce precious peace and it has taken many courageous efforts to prevent the escalation of malicious acts. Nevertheless, tension and discord are growing among the seven major species and in the Council itself. Old alliances are shattering and hasty diplomatic treaties are made in secrecy. A confrontation of the superpowers seems inevitable. Only the outcome of the galactic conflict remains to be seen. Which faction will emerge victorious and lead the galaxy under its rule? Lead your people to victory!

A game of Eclipse places you in control of a vast interstellar civilization, competing for success with its rivals. You will explore new star systems, research technologies, and build spaceships to wage war with. There are many potential paths to victory, so you need to plan your strategy according to the strengths and weaknesses of your species, while paying attention to the other civilizations’ endeavors.

The shadows of the great civilizations are about to eclipse the galaxy. Lead your people to victory!

One expansion pack has already been released: Eclipse: Rise of the Ancients, which adds four new races: intelligent lizards, glowly yellow bugs, space pirates, and at least one more race that’s probably more ancient than those three. Going by the box cover, anyway.

Eclipse was designed by Touko Tahkokallio/Lautapelit.fi, and published by Asmodee in 2011. Retail price is $99, but most online retailers offer it for around 70 bucks.

A great game; I’ve only played it once but I loved it. Really elegant system whereby removing tokens to colonize reveals your resource levels, makes it easy to see what you have despite being an epic game. A lot of gameplay in this one.

Thanks Bill! I’ve wanted a good multi-player space conquest game for years. Just seeing all those red and yellow toy starships scattered across the map brings back great memories of the games of my youth. Now, if I could only get all those players around a table again…

Another newer one worth looking at is Exodus: Proxima Centauri, I have enjoyed this one more than eclipse though I need to play both more. It’s very much a 4X style boardgame, but the rules are really quite simple.

We had 20 people show up to play it at the small board gaming convention I run (in a city of 200,000 people). I suggested that if people wanted to play it, I would only guarantee they could if they brought a copy. I ended up with 7…

I quite like the game, it is sufficiently different from Twilight Imperium 3 that you can keep both (well I can) because both give you a different game experience.

I have yet to play Exodus, but it is sitting on my shelf, waiting to be played. I think it is time to start scheduling 4X nights.

> Another newer one worth looking at is Exodus: Proxima Centauri

Indeed — that looks great! But boy, I’m not having any success tracking it down. It’s not listed on Amazon, and none of the half-dozen big game retailers on eBay I do business with have it in stock yet.

> I quite like the game, it is sufficiently different from Twilight Imperium 3 that you can keep both

I got the same impression. I do enjoy the fact that Fantasy Flight has been supporting TI3 with some very intriguing expansion sets… any idea if they’re worth the money?

[…] the wonderfully creative Unhallowed Metropolis from Atomic Overlord Games, and a used copy of Eclipse – but Outbreak: Deep Space is the gem of the […]

[…] may appear simplistic compared to modern games of empire-building in space, like Eclipse, EVE Conquests, or Empires of the Void. At first glance, they may seem more comparable to […]

An amazing game with pleasing expansion packs. I play this semi-regularly with another dad and our two sons.

Thank Harold! Haven’t tried the expansion packs yet… are they worth the money?