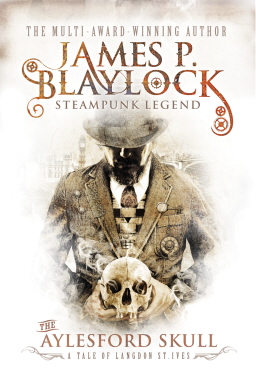 James P. Blaylock is something of a hero to Steampunk fans. We don’t go so far as to say he invented the genre single-handed, but he was definitely in the laboratory when Igor threw the switch and it took its first lumbering steps.

I first encountered Blaylock in the late 80s, when he was making a name for himself with brilliant short fiction like “Paper Dragons” (1986), which won the World Fantasy Award, and novels like The Elfin Ship (1982) and The Digging Leviathan (1984).

But his steampunk pedigree dates back to his Langdon St. Ives novels, starting with Homunculus (1986) and Lord Kelvin’s Machine (1992) — collected in The Adventures of Langdon St. Ives, a handsome omnibus edition that also included four related short stories, published by Subterranean Press in 2008.

So you can understand the excitement when Titan Books recently announced the first full-length Langdon St. Ives novel in two decades: The Aylesford Skull, a rollicking new steampunk adventure, from one of the genre’s pioneers, that takes us into the dangerous underworld of 19th Century England, through the foggy depths of the Cliffe Marches and the lairs of smugglers and pirates, and into the sewers, lost rivers, and sorcerous underworld of London:

It is the summer of 1883 and Professor Langdon St. Ives — brilliant but eccentric scientist and explorer — is at home in Aylesford with his family. However, a few miles to the north a steam launch has been taken by pirates above Egypt Bay; the crew murdered and pitched overboard. In Aylesford itself a grave is opened and possibly robbed of the skull. The suspected grave robber, the infamous Dr. Ignacio Narbondo, is an old nemesis of Langdon St. Ives.

When Dr. Narbondo returns to kidnap his four-year-old son Eddie and then vanishes into the night, St. Ives and his factotum Hasbro race to London in pursuit…

The Aylesford Skull will be published January 15th by Titan Books. It is 425 pages in trade paperback, priced at $14.95 for both the print and digital versions.

You can see all of our recent New Treasures here.

Ooh, The Adventures of Langdon St. Ives is $4.99 for the Kindle version (and ludicrously expensive for the dead-tree version). Given my love of steampunk, it has now been purchased!

Yeah, I purchased the Kindle version too. It has two complete novels and four short stories… that’s a lot of reading for just $4.99!

Both are out of print in limited hardcover, but the digital versions are just $2.99.