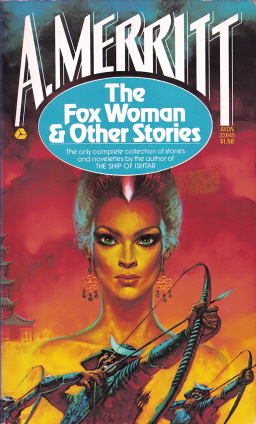 I’m a pulp fan, and I have been for decades. The next time I’m marooned on a desert island, I’m taking as many magazines from the 1930s and ’40s as I can cram in the life raft.

Pulp novels though… you know, that’s another story. Ask me to name the great fantasy novels of the pulp era, and I run out of air pretty quickly. The fast action and colorful settings of great pulp fiction seem to work best at short length, which maybe explains why the era’s biggest names — H.P. Lovecraft, Robert E. Howard, Clark Ashton Smith — wrote almost exclusively at that length.

Perhaps that also explains why the years have not been kind to the most popular fantasy novelists of the pulp era — Otis Adelbert Kline, Ray Cummings, John Taine, L. Ron Hubbard, Ralph Milne Farley. All were prolific novelists before the end of World War II and virtually all are long out of print.

That’s especially true of the man who was perhaps the biggest name in pulp fantasy: A. Merritt. For decades, his name on the cover of a pulp magazine guaranteed sales in the hundreds of thousands and his novels remained in print late into the ’70s.

I first tried Merritt at the age of fourteen — already a pulp fan, I’d read more than a few breathless reviews of his work from several sources. I found a copy of his 1931 novel, The Face in the Abyss, in the spinning racks of a used book store in Ottawa and snatched it up with considerable excitement… which quickly turned to disappointment.

The tale of two-fisted mining engineer Nicholas Graydon’s search for lost Inca treasure, and his dalliance with a handmaiden to the Snake Mother of Yu-Atlanchi, was too pulpy even for me. And trust me, I had a pretty high tolerance.

Years later, when I mentioned in the pages of Black Gate that I was looking for reprint suggestions, I received a photocopy of an A. Merritt story in the mail from an enthusiastic fan. I set it aside, recalling the purple prose of The Face in the Abyss all too well.

But a few months later, pulp expert John C. Hocking suggested the same story to me, saying it was a brilliant example of original heroic fantasy.

The story was “The People of the Pit” and it can be found in Merritt’s only short story collection, The Fox Woman & Other Stories, first published in 1949.

I recently purchased a small paperback collection, and as I unpacked them today, I found a copy of The Fox Woman tucked away among them. Flipping through it reminded me that I never had the time to try “The People of the Pit.” Perhaps now that I’m not pulled away by the demands of publishing a print magazine, I can steal a few moments to read the whole book. I’ll let you know what I think.

The Fox Woman & Other Stories was reprinted by Avon Books in 1977. It is 208 pages in paperback, priced at $1.50, with a gorgeous wraparound cover by Ken Barr (click the image at left for a larger version). As yet, there is no digital edition.

Love that cover! (And all of the other covers from the same set of Avon editions.) I’ve read a certain amount of Merritt — at some point I should try to go back and fill in the gaps.

I quite enjoy Merritt.

My own experience with The Face in the Abyss was quite different. It was the first ‘long’ piece of Weird Fiction I read.
I was about 10 and I remember enjoying it’s seriousness about the almost too fantastic.

I’ve a lot of stuff from the days of Merritt + “The People of the Pit” is a certain hall-of-fame piece of Weird shit. Up there with the best of ’em from REH, CAS, HPL, etc.

Here are wrap around cover scans i made of all of hte last Avon editions from the 1970s. I hope that you all like them!
These are prime examples of how books should be sold.

Sorry about the typos! I’m having a bad typing day!

“The next time I’m marooned on a desert island”

This happens to you often?

All the time! It’s getting to become repetitive. 🙂

> Love that cover! (And all of the other covers from the same set of Avon editions.)

Hear, hear! The Avon paperbacks are worth collecting for the wraparound cover art alone. Weird and beautiful.

Our buddy Uncle Doug has a nearly-complete set on display in all their wraparound glory at his Bunker of Vintage Horror Paperbacks here:

> “The People of the Pit” is a certain hall-of-fame piece of Weird…
> Up there with the best of ‘em from REH, CAS, HPL, etc.

Glad to hear it. I hope to return to THE FOX WOMAN tonight, and will certainly share my thoughts here.

> Here are wrap around cover scans i made of all of hte last Avon editions from the 1970s. I hope that you all like them!

You beat me to it! I gave the same link in my comment to Joe above.

Great work with those covers — and your site in general.

> All the time! It’s getting to become repetitive.

You took the words right out of my mouth!

[…] Vintage Treasures: The Fox Woman and Other Stories […]

[…] the most well known, the biggest name if you will.  Recently Black Gate editor John O’Neill mentioned he had obtained a copy of Merritt’s only short story collection, The Fox Woman, and said he […]