I’ve had my eye on Catalyst Game Labs’ steampunk miniatures game Leviathans since it was released in 2012.

Leviathans simulates epic battles in the sky between iron juggernauts in an alternate history/steampunk 1910. The huge, nine-pound game box includes eight high-quality plastic ship miniatures for the British and French fleets, a bunch of ship cards, two massive 18″ x 22″ board-game maps, and instructions on how to use the dice and cards within to simulate the thunderous clash of nations in the clouds. Ten minutes after I opened my copy, I was joyfully maneuvering  my king leviathan battleship over London and, in my best pseudo-French accent, ordering my loyal gendarmes to smash the limey light cruisers and destroyers out of the sky.

Not that it did any good. I still haven’t read the combat rules yet. But lordy, it felt great.

Leviathans is an expensive game. Like, nearly $100 for the core set. Playing it feels a little like a sport for the rich, like polo and sailing.

Fortunately, Catalyst Game Labs has also released two smaller miniature sets for those who want to try it out without making such a big investment: the British Fleet Box and French Fleet Box are both available for $49.95, and you can download the rules and all the ship cards from the Catalyst Game Labs website.

Ultimately, however, you’re going to want the core set — it has as many miniatures as both smaller sets put together, as well as all the maps, printed rules, and more ship cards. It’s worth the investment.

Like the best fantasy board games, Leviathans has an inventive backstory that gives the game a rich alternative history setting. Here’s the short version from the back of the box:

In 1878 the Polish genius Rychnowski isolated an electrical fluid with remarkable lifting capabilities – a single, pivotal event that would change the world. The smartest military minds of the coming generation – Zeppelin, Jellico, Fisher and others – diverted their attention to the glorious new technological revolution and sea-going battleships were abandoned around the world. In their place, armored giants took to the skies.

In 1906, Great Britain launched the HMS Leviathan, the first of the “super air ships”, sparking an arms race around the world. By 1910 the most powerful nations boasted large High Fleets, and the start of small skirmishes left the world uneasy… Welcome to Leviathans!

Leviathans is a game published by Catalyst Game Labs that simulates combat between warships that have taken to the air in an alternate history 1910. The king leviathans, the battleships, are the largest vessels. Maneuvering in support are the smaller ships of light cruisers, destroyers, and others ships. Will you captain your fleet for king and country, expanding your nation’s power and becoming legend? Or will you fall from the sky, forgotten?

You will determine the outcome!

I bought my copy yesterday and have barely scratched the surface of the game. But I’m very excited to play my first large-scale clash. The steampunk 1910 setting — with all its nationalist fervor, old European rivalries, and the first stirrings of emerging superscience — makes a perfect time and place for this kind of game. And I think the French and English fleets made a good choice as well… they’re they only accents I can fake really well.

Here’s a look at all three game boxes and the contents of the core set (click for bigger version): 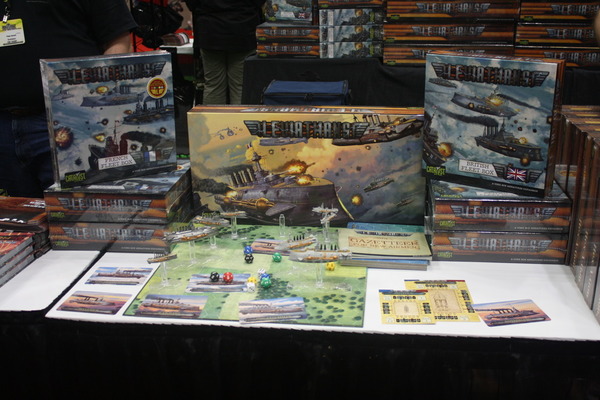 Leviathans was designed by Randall N. Bills and John Haward, and illustrated by Doug Chaffee. It was released by Catalyst Game Labs in 2012. It was designed for 2-8 players, with an average playing time of 90 minutes. The retail price is $99.95.

Great game. My only quibble with it the rather mundane choice of Brits and French as the main combatants. It would have been much more interesting had say, the Poles become militarily ascendant (because they invented the stuff) or had the two fleets Russians and Japanese, because they fought the most significant naval actions of that period pre-Jutland.