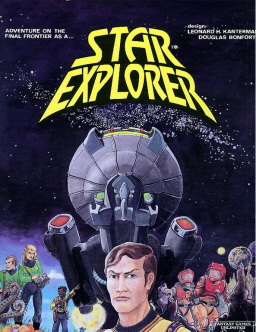 Turns out it’s not actually that hard — at least not if you follow the example of Star Explorer, the science fiction game of “Adventure on the Final Frontier” published in 1982 by Fantasy Games Unlimited.

Star Explorer was released three years after Star Fleet Battles, Steven V. Cole’s groundbreaking wargame from Task Force Games in 1979, and the same year as the first true Star Trek RPG, Star Trek: The Role Playing Game, published by FASA. Both competing titles were hits, with multiple editions over the next few decades.

In contrast, Star Explorer vanished pretty quickly, with virtually no supporting material at all. Which is a shame, because it had a lot of potential.

Star Explorer is an adventure game of exploration and encounter in deep space. It places you in the role of a starship captain who must command her ship on a variety of dangerous missions. Success depends on your ability to select the right crew for away missions and to tweak your ship design as required.

While it had some role playing aspects, it was really a board game, with a board and everything. Not a board that displayed tantalizing planets and star systems for you to explore, sadly. No, just a green, featureless tactical map used to resolve star combat. But you did get 240 colorful counters you could push around the map and imagine were exploring stuff.

The rulebook was a miracle of concise design, punching in at a slim 16 pages. The box also included the 17″ by 22″ tactical map, a counter sheet, a pad of ship and planetary log sheets, and three dice (including the smallest d20 I’ve ever seen).

If the interior art reminded you of classic TSR publications like Deities & Demigods, Descent into the Depths of the Earth, Vault of the Drow, and Tomb of Horrors, that’s because artist Jeff Dee also worked on all those projects. Jeff was the youngest artist at TSR when he began working there at eighteen; he’s also known as the co-creator (with Jack Herman) of one of the very first super-hero RGPs, Villains and Vigilantes (1979.)

Like his later release, Starships & Spacemen is fondly remembered. The 82-page rules allowed you to become a Vulcan… excuse me, a Tauran, with a machine-like logical mind, which you could pit against the sinister Videni, Romulan analogs who had split off from the Taurans and looked exactly like them. The book included sections on alien encounters (including elephants in space), starbases, psionics, time travel, and even a sample mission.

The license to Starships & Spacemen was picked up last year by Goblinoid Games, makers of Labyrinth Lord, who have updated the rules and released a Second Edition.

No word yet on whether a second edition of Star Explorer is in the wings, but we can hope.

Star Explorer was designed by Douglas Bonforte and Leonard H. Kanterman, and published by Fantasy Games Unlimited in 1982. Art was by Bob Charrette and Jeff Dee.

Hey John, thanks for the mention! I own all rights to both Star Explorer and Starships & Spacemen. I have no plans to revis the rules of Star Explorer, but improving the look and expanding the game might be down the road. You can get both of these in PDF form from my store:

You can also get print on demand copies of Starships & Spacemen, both original and revised, from my store here:

And finally if you don’t want to print Star Explorer at home you can get a print on demand version here:

The new release of Star Explorer in POD format has a revised game board, much more attractive IMHO. The PDF version includes both if you want to have both options.

I think that Star Explorer would be a great candidate for a new edition. The game works pretty well at accomplishing what it attempts to do. It’s a little rough around the edges and the box was way too big for the components inside, but I love my copy.

As a small quibble. 1978 saw the publication of Heritage Models Star Trek RPG http://en.wikipedia.org/wiki/Star_Trek_role-playing_game_%28Heritage_Models%29. I don’t know whether S&S beat it to the shelves or not.

The Heritage Models Star Trek game became the RPG Star Patrol. I have a copy of Star Patrol FWIW>

First I ever HEARD of the Heritage Models Star Trek game was about 8 hours ago, when I was researching STAR TREK games for this article. I’ve never heard of it, never seen a copy, and couldn’t even find a pic of it on the Internet anywhere. That’s the very definition of an elusive game.

I hadn’t realized it became STAR PATROL (and I don’t know much about that one, either). Was it any good?

> Hey John, thanks for the mention!

> I own all rights to both Star Explorer and Starships & Spacemen.

Excellent! I didn’t realize you also owned the rights to Star Explorer. Glad to hear it’s in good hands!

What’s your next project? Will you be licensing additional classic games, or building on S&S or Labyrinth Lord, or all three?

I have a copy of store explorer that I did several enhancements to. First I drew up to saucer styles Star Trek cardboard sheets that were big enough to put my counters on to show the different compartments of the ship were each of the crew resided I made a transporter room and made a place for the captain to sit so it greatly enhanced the feel of the game I also made alterations to some of the encounters in space as you move and I brought in a lot of different things such as a new space aliens, etc. as a result there is a lot more going on with some of the missions especially when you encounter sentient creatures but now have a lot more different things that they can do in the reaction to your away teams. Would love to see his second edition of this game with much improved graphics and even more fleshed out missions. The map I use this from Star Trek adventure game that has planets all over it plus it shows a federation space in the Klingon space at opposite ends of the board and so I use that as my star map and labeled each planet on that map so I draw six numbers which could be any other planets that my missions will go to so I fly my shift there and then do a scan of the surface to see what type of environment I’m dealing with.
One of my all-time favorite games that I still play to this day.