Whelp, it’s well into December and I’m only getting to the November roundup now. My apologies, and here goes. 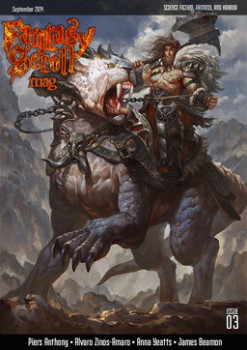 Last month, I promised I’d let you know about Fantasy Scroll #3. Despite its name and its side-of-a-van-worthy covers, the magazine continues to be mostly science fiction or non-heroic fantasy. When you buy something with a cover like the one to the left of this paragraph (<—), and you don’t get a lot of swordplay, demons, and wizards, you might feel like you bought a pig in a poke. Maybe they’ve got plans to mix things up a little more in the future. There are two S&S out of thirteen stories in Issue #3, but I’m definitely hoping for more per issue in the future.

That said, the magazine managed to get a Piers Anthony story, “Descant.” It’s a love story set to music about an intelligent king and princess. There are some awkward sentences and overall I found it a little boring. But it doesn’t have any puns, so it’s got that going for it.

James Beamon’s very funny “Orc Legal” is about the prison and courtroom travails of an orc named Anglewood. He’s been jailed pretty much for being an ex-evil henchman. He takes on the defense of a centaur charged with lewd behavior in order to finish the community service part of his sentence. No Atticus Finch, he uses any tool, from obfuscation to outright threats, to win his client’s acquittal. Beamon has a lot of fun with all the orc stereotypes, and gets a few well-deserved digs at snooty elves as well. I like a funny story that’s actually funny, and this one definitely is.

“The First First Fire” by Alexander Monteagudo is a very short story. Ralo, the first man ever appointed First Fire — essentially the tribal wizard –is normally a peaceful man. But a caravan from his home, the village of Pempansie, has been attacked by slavers. While warriors defeated the slavers, everyone knows they’ll be back. This brief tale describes how the young magic user decides what to do in the face of the threat to his family and friends. There’s not much here, but I enjoyed it and would be happy enough to see more of the character.

There was only one heroic fantasy story in the November issues of Beneath Ceaseless Skies: #160‘s “The Streetking” by Peter Hickman. It’s a marvelous tale of a street criminal and the young noble girl who comes to sell him stolen jewelery. Over time, she comes down to the streets herself. With her “mineshaft mind”, they become a formidable pair. So much so that they run afoul of the lord of the underworld, the Streetking.

The highlight of the story is the street argot Hickman’s created for his narrator’s voice. It’s got the right amount of slang and original syntax to sound believable:

Thank the Gods none played witness. Few in the city would have faced me and not been quick bleeding for it. There I was, melted down like spring ice by a bone-built slip of a thing. I first figured her for a madling. Bad omens in killing the mad. Their mind meeting yours as the life leaves. Else the child were one more drop of waste for the Sweepers. Then I noticed her clothes. If she were madling, she were a rich one. I’d prised into enough bedrooms and whistled away enough finery to know Arimean goldtrim when I saw it. Nine silvers a bolt, if you lay it clever in the right claws.

There’s also a podcast of “The Streetking” in the issue, that I’m tempted to give a listen to. I generally don’t listen to the audio bits of any of these magazines ’cause I’m a busy guy, but I really loved this one. In fact, I haven’t mentioned it lately, but there’s a podcast in every issue of Beneath Ceaseless Skies. It’s a great idea that I should pay more attention to. Since heroic fantasy is broadly mimicking myths and legends, and they were mostly conveyed orally, it’s a nifty nod in that direction.

Finally, we come to Swords and Sorcery Magazine (#34). The first story is “War and Peace Pipes” by Gustavo Bondoni. It’s the third story this year I’ve read using the Americas as the setting for heroic fantasy (see Eric Atkisson’s “Crazy Snake and the Camazotz” and Evan Dicken’s “Mouth of the Jaguar“). If it’s a trend, it’s a pretty cool one that I’d love to see more of.

Strong Buffalo is the leader of an Anasazi town. One day, Thor and a band of Viking warriors show up, wandering in out of the wilderness.

The years had taught him many things, and he’d earned every wrinkle. And among the first things one learned out in that hot and arid land was that heavy fur cloaks were not the ideal way to dress for the midday heat in the summer. Another was that it was always a bad idea to wear horned hats. You were just asking for a hunter to put an arrow into your behind and pretend he thought you were a buffalo. All in good fun, of course. And better not to dwell on the reaction a real bull buffalo would have if you crossed his path.

Still, unless his aged eyes were deceiving him or the spirits were up to their old tricks again, the twenty men staggering up the path in the sun were not only dressed in fur – what seemed like bear fur of all things – but some of them were also wearing horned hats. Strong Buffalo immediately discarded the spirits as a possibility because while spirits might be unfathomable and capricious, these guys were clearly bonkers.

The end falls apart, but up till then this one’s pretty good and pretty funny. Bondoni’s bio in the magazine states, “He has published over 100 stories in ten countries and four languages,” so I think I’ll try to check some of them out.

“Readers,” A.J. Carter’s first published story, is a more serious affair. Lani is a newly minted Apprentice Reader fresh from the Scholars’ Academy. She is upset that instead of a post-graduate appointment at an embassy or with a noble house as she had been hoping for, she’s been assigned to a traveling sideshow.

Readers are capable of seeing the past of written words including who composed them and where. It’s a highly regarded talent and Lani considers riding in a caravan of charlatans and fortunetellers insulting and degrading. Things aren’t what they seem, though, and dark magic lurks ready to ensnare the young apprentice. A nice solid first story that feels complete on its own, but could easily be the jumping-off point for an ongoing series.

So go read some stories, people. I’m sure you’ll find some you’ll like, take my word for it.

Hi! You are correct about the amount of epic fantasy being a bit lacking. The truth is, after a full year of reading submissions, I can honestly say that we haven’t received a lot that were good enough. It seems like these days people enjoy writing a lot of paranormal stuff, horror, and very light sci/fi (e.g. normal character driven stories that are somehow put in a sci/fi setting). What I’ll probably do going forward is make a mention in the guidelines that we are looking for a lot more epic fantasy and hard sf. I think in Issue #4 (released today) we have a few good pieces too. You can see from the cover art (alternating SF and Fantasy with each issue) that we are trying to appeal to both genres equally. Maybe that’s a mistake and we’ll learn from it… But thank you very much for your review and I hope you will enjoy the stories we put in Issue #4.