Like most of you folks, I used to have more reading time. Like, a ton more reading time. Whole summer vacations just lazing around with my feet on the furniture and my nose in an epic fantasy. Nowadays I’m lucky to negotiate a three-day weekend and, believe me, that kind of reading time is much too precious to devote to a single author. Yes, reading vacations still tend to be devoted to big books — I haven’t broken that habit– but these days more often than not they’re thick anthologies that let me sample a wide range of writers. And usually anthologies curated by an editor who’s earned my trust.

That’s why I’m so partial to Gardner Dozois. He’s got great taste, for one thing. For another, he produces big books, the kind you can plan a vacation around. One of my favorites is his massive survey anthology Modern Classics of Fantasy, which is the kind of book that makes you wish you could be stranded on a desert island. Sure, I’d probably go hungry and miss the internet. But if it meant I finally had 15 uninterrupted hours to read this thing cover to cover, it’d totally be worth it. 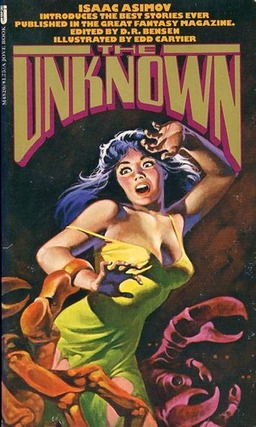 In his Preface, Gardner tells the tale of the magical paperback anthologies that first introduced him to Conan, Elric, and Fafhrd and the Gray Mouser.

By the late 1950s, although I was an avid consumer of science fiction, I didn’t know a lot about fantasy… by the early 1960s, this had begun to change. One of the first cracks in the armor, for me, anyway, happened in 1962, when an SF mass-market line named Pyramid Books published a paperback edition of L. Sprague de Camp and Fletcher Pratt’s The Incomplete Enchanter… it made a huge impression on me… In 1963, Pyramid brought out an anthology of stories, edited by D.R. Benson, from the by-then long extinct fantasy magazine Unknown, where the de Camp and Pratt “Harold Shea” stories that had gone into making up The Incomplete Enchanter had originally appeared; sensitized by this connection, I bought the anthology, one of the first anthologies I can remember buying. In its pages, [I] encountered for the first time Fritz Leiber’s Fafhrd and the Gray Mouser, as well as discovering the work of Manly Wade Wellman and H.L. Gold. A few months later, I came across another Pyramid anthology, this one edited by L. Sprague de Camp and called Swords & Sorcery, a deliberate attempt by de Camp to preserve at least, and perhaps revive, a then-Endangered Literary Species called “swords & sorcery” or “heroic fantasy.” Here was another Gray Mouser story, and here for the first time I also encountered Robert E. Howard’s Conan and C.L. Moore’s Jirel of Joiry, first read the work of Lord Dunsany and H.P Lovecraft, and first read the fantasy work — I was already familiar with his science fiction — of Poul Anderson; a later de Camp anthology, The Spell of Seven, introduced me to Michael Moorcock’s Elric…

If you’re interested in learning more about the anthologies and collections Gardner mentions above, we’ve discussed each of them in detail at some point in our history:

Here’s the complete TOC for Modern Classics of Fantasy. 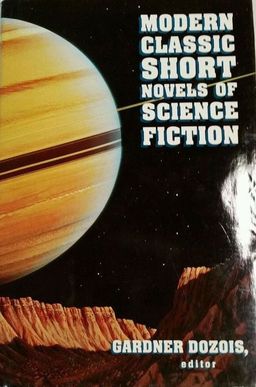 Modern Classics of Fantasy is part of a series of anthologies edited by Gardner that also includes:

Modern Classics of Fantasy was published by St. Martin’s Press in January 1997. It is 670 pages, priced at $35 in hardcover and $18.95 in trade paperback. The cover is by James Gurney.

I’ve always wanted this book (among many others), and I see it’s still fairly easily available.

The sometimes hazy distinction between science fiction and fantasy is nicely illustrated by the inclusion of “Bears Discover Fire”, which Gardner also included in his Year’s Best Science Fiction series!

Good point! Roger Zelazny’s “Death and the Executioner” (which eventually became part of his finest novel, Lord of Light), is also pretty clearly SF… but maybe only in wider context.

It’s also now available on Kindle for $7.99 if your reading runs that way.

This really is a great collection; if nothing else, it’s the book that _finally_ got me to sit down and read Zelazny’s Lord of Light (one of whose components is the Zelazny story in the collection); for whatever reason, I’d always bounced hard off Lord of Light until I read the story, which kind of gave me a way into the book.

(And I’m kind of hoping that the Delany piece in Paula Guran’s Swords Against Darkness will provide the same service for the Neveryon books.)

This one’s definitely a keeper.

I’ve had this one for a while. Great book. I should flip through it again.

WOW! What a fantastic collection! I’ve read over half these, but that’s not going to stop me from getting my hands on a copy of this book!