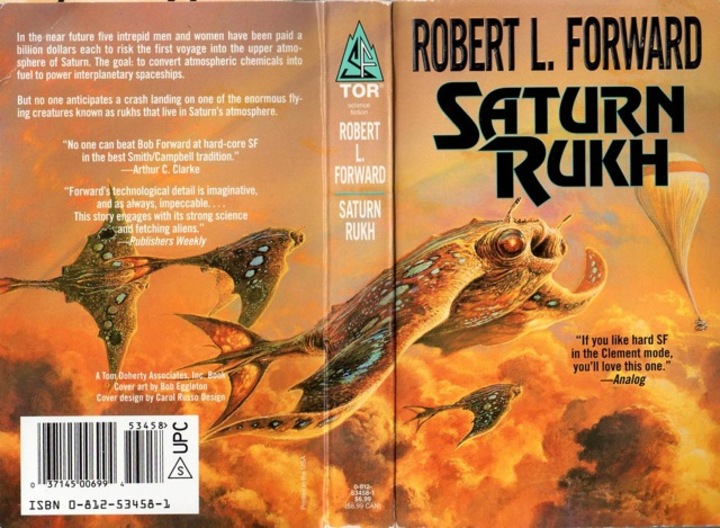 I know this is a fantasy blog, but for this one I want to appeal to the third (and most famous) of Clarke’s laws, which is “Any sufficiently advanced technology is indistinguishable from magic,” because I want to talk about the scienciest, most extrapolatey, most out there science fiction, which isn’t overtly different from fantasy except in aesthetic.

This comes from my musings about writing a story set in orbit of a neutron star, and also because I was recently discussing with a friend where to find the hardest SF.

I get a lot of ideas when I read other authors. I love seeing what science people know and transform into story, and I love seeing that unique kind of creative ambition.

Some caveats: When I looked in my book shelf for examples to show a friend, I came up with three authors and six titles. My shelves don’t have every book, and so I’ll certainly miss some stunning works.

A kind of grand-daddy of the hardest stuff is Hal Clement, famously the author of the Mission of Gravity (1953). This novel is set on a massive planet with gravity in the 700g range, but which rotates so quickly that the apparent gravity at the equator is low enough for humans to survive (with assistance).

Most editions of the novel also include Clement’s essay on the physics on how he created the world. But, my friend had already read this one.

I found out about Robert Forward, a NASA scientist, when reading Stephen Gillett’s World-Building and so ordered it. Forward has some clunky character work and I wouldn’t say his female characters published in 1980 age well, but he outsciences Clement. I have four of Forward’s novels.

Dragon’s Egg (1980) is the interweaving story of the creatures living on a neutron star and the humans who visit the neutron’s star’s orbit. The magic in this is astonishing, and convincing.

Forward also includes an essay at the back of the book on the physics around neutron stars: the atmosphere of gaseous iron reaching up all the way to an altitude of 5cm, its 67-billion-g gravity, its magnetic field and neutronium lava and the sped-up living of creatures made of atomic reactions. All pretty amazing and a huge shot of sense of wonder.

Flight of the Dragon-Fly a.k.a. Rocheworld (1982) is a human voyage by lightsail and laser power to Barnard’s Star 6 light years away.

There is a double world there, two planets orbiting each other, and as the title suggests, the danger that the get into each others’ Roche Limit and disintegrate is real. And of course, the strange orbital possibilities and the alien life that would live there is fun.

Camelot 30K (1993) is the story of human contact with intelligent aliens living on a frozen planet where the temperature is 30 Kelvins (30 degrees above absolute zero). I think I’ll reread this one for the low-temperature chemistry…

Saturn Rukh (1997) is a story of exploration and survival set in the clouds of Saturn, with the giant flying creatures that live there. This is perhaps the least extropolatey of the novels I have of Forward’s, but it is great fun and gave me lots of food for thought.

Clement and Forward extrapolate planetary astronomy, chemistry, and gravity around different bodies. The last writer I mentioned to my friend was British author Stephen Baxter. Instead of focusing on the hard things we can weigh, Baxter likes to extrapolate theoretical physics.

Many of my favorite Baxter stories and novels are set in the same universe, so there’s no shortage of works to mention. Novel-wise, one of the best places to start is Ring (1994). Ambitiously, Ring tells the story of the end of the universe and how humans could survive it. One of its characters goes on a 5 million year starship journey.

And that’s not even the most wacked-out stuff Baxter gets into. Strap in.

Baxter also embraces the possibilities of dark matter and how a whole different cosmic ecosystem might live with different kinds of matter, and what they might want once they get to the stage of galactic engineering. A great sampler of the scope of his work is in his collection Vacuum Diagrams. Highly recommended for your dose of theoretical physics.

There are lots of other really hard SF writer, people who go so far out on a limb that they’re making magic. These are my three. If you have suggestions I’d love to add to my list!

Derek Künsken writes science fiction and fantasy in Gatineau, Québec. He tweets from @derekkunsken. His latest Asimov’s story Flight From the Ages (2016) is hitting bookstore shelves again on Wednesday as part of Gardner Dozois’ Year’s Best Science Fiction, Volume 34. Dozois called it “…a story of mind-boggling scope and span.”

I reviewed Mission of Gravity a few months back – good, clean, scientific fun. Baxter is someone I need to read more of – Raft, Vacuum Diagrams, and The Time Ships are terrific.

You did a great review, Fletcher! I read it and that may have put the bug back in my ear.

I just picked up Saturn Rukh a few weeks ago. I’m looking forward to reading it.