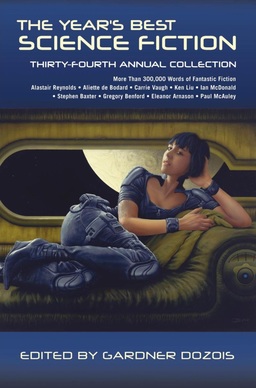 I look forward to Gardner’s Year’s Best volume every year. It was the first science fiction Year’s Best I read regularly — starting way back in 1989, with the Sixth Annual volume, while I was in grad school. And while I didn’t always make time to read every volume cover to cover, year after year, I always read Gardner’s summation, the indispensable annual report card that captures all the relevant news, industry trends, hot books, overlooked gems, and of course Gardner’s cranky observations and ruminations on the future of the field.

A few years ago I noticed that Gardner lists my name in the “Acknowledgements” section every year, and that he has every year since 2004. I’m not sure why. But I’m always surprised and delighted to see it.

Gadrner’s Year’s Best Science Fiction is by far the largest and most comprehensive of the annual Year’s Best volumes. The Thirty-Fourth — thirty-fourth! — arrives in hardcover and trade paperback from St. Martin’s Press in ten days. Here’s a taste of Gardner’s Summation, in which he comments on an unwelcome trend I’ve noticed myself: the gradual disappearance of the mass-market paperback.

Like last year, 2016 was another relatively quiet year in the SF publishing world, although there were some changes down deep… One such effect that may eventually become noticeable to the average reader is the dwindling of mass-market paperback titles, once the most common way (at one point, almost the only way) for SF books to be published, from bookstores shelves. The publishing industry has been trying to find the right balance between traditional print publishing and the publishing of titles as e-books for a number of years now, and one area where publishers seem to be switching away from print publication to e-book only publication is in the mass-market paperback market niche. At least in the science fiction/fantasy publishing world, the number of mass-market paperbacks published was down for the eighth year in a row, hitting a new record low, down 11 percent since 2015. I think this may be a mistake, myself.

Previous Year’s Best volumes we’ve looked at in 2017 include:

The Year’s Best Science Fiction: Thirty-Fourth Annual Collection will be published by St. Martin’s Griffin on July 11, 2017. It is 704 pages, priced at $40 in hardcover, $22.99 in trade paperback, and $7.99 for the digital edition. The cover is by James Burns.