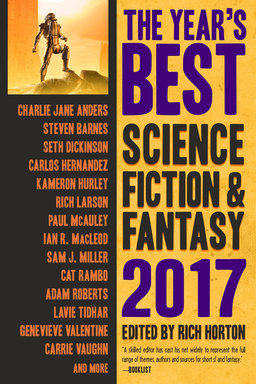 The Year’s Best season is now in full swing. Jonathan Strahan‘s volume arrived April 18th from Solaris, and Neil Clarke‘s April 4th from Night Shade. Couple that with the 2017 Nebula Awards Showcase released last week from Pyr, and you have the beginnings of a decent SF library.

So why would anyone who has those volumes need another Year’s Best?

Simple, really. Where else will you find Lavie Tidhar’s groundbreaking novella “The Vanishing Kind?” Or Paul McAuley’s “Something Happened Here, But We’re Not Quite Sure What It Was?” Or Carrie Vaughn’s Hugo nominee “That Game We Played During the War?” Or Jason Sanford’s Nebula nominee “Blood Grains Speak Through Memories?” Or Cat Rambo’s almost-Nebula-nominated “Red of Tooth and Cog?”

Nowhere but in Rich Horton’s upcoming Year’s Best Science Fiction & Fantasy 2017, coming next month from Prime Books. This is Rich’s ninth volume, and over the years he’s proven to have both excellent taste and genuine skill ferreting out future classics in out-of-the-way places (such as private Patreon feeds, and the Beloit Fiction Journal.) He may well be the most widely-read of all the Year’s Best editors, and it shows in his Table of Contents every year.

“The Visitor from Taured” by Ian R. MacLeod (Asimov’s)
“Openness” by Alexander Weinstein (Beloit Fiction Journal)
“In Skander, for a Boy” by Chaz Brenchley (Beneath Ceaseless Skies)
“Laws of Night and Silk” by Seth Dickinson (Beneath Ceaseless Skies)
“Blood Grains Speak Through Memories” by Jason Sanford (Beneath Ceaseless Skies)
“Rager in Space” by Charlie Jane Anders (Bridging Infinity)
“Ozymandias” by Karin Lowachee (Bridging Infinity)
“The Bridge of Dreams” by Gregory Feeley (Clarkesworld)
“Everyone from Themis Sends Letters Home” by Genevieve Valentine (Clarkesworld)
“Things with Beards” by Sam J. Miller (Clarkesworld)
“Innumerable Glimmering Lights” by Rich Larson (Clockwork Phoenix 5)
“Between Nine and Eleven” by Adam Roberts (Crises and Conflicts)
“Red of Tooth and Cog” by Cat Rambo (F&SF)
“The Vanishing Kind” by Lavie Tidhar (F&SF)
“A Fine Balance” by Charlotte Ashley (F&SF)
“Empty Planets” by Rahul Kanakia (Interzone)
“Fifty Shades of Grays” by Steven Barnes (Lightspeed)
“I’ve Come to Marry the Princess” by Helena Bell (Lightspeed)
“RedKing” by Craig deLancey (Lightspeed)
“A Non-Hero’s Guide to The Road of Monsters” by A.T. Greenblatt (Mothershipship Zeta)
“Dress Rehearsal” by Adrian Tchaikovsky (Now We Are Ten)
“The Plague Givers” by Kameron Hurley (Patreon)
“Gorse Daughter, Sparrow Son” by Alena Indigo Anne Sullivan (Strange Horizons)
“The Magical Properties of Unicorn Ivory” by Carlos Hernandez (The Assimilated Cuban’s Guide to Quantum Santeria)
“Something Happened Here, But We’re Not Quite Sure What It Was” by Paul McAuley (Tor.com)
“That Game We Played During the War” by Carrie Vaughn (Tor.com)

See all our coverage of the best in upcoming SF and fantasy here.

Not to overcomplicate things, but it’s actually Rich’s twelfth volume. In 2006, 2007, and 2008, he produced separate volumes for science fiction and fantasy, also for Prime Books.

All that happened from 2009 onwards is that the separate halves were “fused” into one volume, so I think it’s perfectly fair to give Rich credit for twelve years.

This is a very nerdy thing to keep track of, I know, but we’re lucky enough to have several long running series at the moment, and it’ll be interesting to see just who will challenge the existing records.

> I think it’s perfectly fair to give Rich credit for twelve years.

Fair enough! I tend to date these volumes from when they began in their current, delicious, omnibus format… but who am I to deny Rich his due? Let’s call it 12 years.

Dozois is already contracted to do his 35th, Wollheim did 26 (if you count the ones with Terry Carr), and Hartwell/Cramer did 18. It’s a race, I tell you!

The extremely long Nebula series doesn’t count, because that is not a pure editorial compilation, and anyway, multiple editors were/are responsible.

Oh, and of course, Ellen Datlow got to 21 volumes with The Year’s Best Fantasy and Horror.