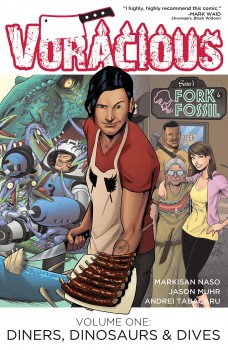 But I digress. The second thing you’d do if you had access to a time machine is go see dinosaurs. At least, that’s what you’d do if you were a guy. Most boys were fascinated by dinosaurs when they were young and, even when we’re all grown up, there’s some primitive part of our brains that thinks, “I gotta see a dinosaur some time.” It’s a really primitive part of the brain, of course. The reptile part.

Voracious deals with the Hitler in the room quite easily. When Nate Willner inherits a fortune from his mysterious dead uncle, he also inherits his secret time machine. And the time machine has only pre-set coordinates, so Nate can’t go Nazi-hunting. Instead, he gets sent directly to the age of dinosaurs.

Six panels after a beautiful two-page spread illustration of dino-times, Nate is panicking and running for his life from some very large (and very obviously herbivorous) dinosaurs. Since the time suit he’s in is equipped with weapons, he reacts to the first dinosaur that follows him by setting it on fire. And while the implications of murdering a lifeform in the past is lost on him, Nate does notice that the burnt pterodactyl smells delicious.

Being a professional chef, Nate does the only logical thing: bring the dead dinosaur back to the present, cook it up and eat it. Once he confirms that dinosaurs are delicious, Nate decides to use the money he inherited to open a restaurant and the time machine he inherited to acquire lots of free meat that’s unlike anything his customers have ever tasted. Hi-jinks ensue.

Volume One of this series (Diners, Dinosaurs & Dives) collects the first four issues. And while you might think this one joke would wear out fast, writer Markisan Naso also provides a nice supporting cast (Nate’s knife-wielding grandmother being my favorite). Jason Muhr and Andrei Tabacaru provide the wonderful art. And every chapter ends with a dinosaur recipe you can make at home (meat substitutions are provided for those who don’t have easy access to dinosaur meat).

And make sure not to peek ahead while you read, because the last three pages provide an epilogue/cliffhanger that promises an even-more awesome second volume. To learn more about ordering a paper or electronic copy of this collection, check out the Action Lab Comics page, the Amazon page, or the Comixology page.

Michael Penkas has been writing horror, mystery, science fiction, and fantasy stories for years. His first mystery novel, Mistress Bunny and the Cancelled Client, is available in print and electronic editions. Learn more about his work at www.michaelpenkas.com.