For the third time in two years, Dave Ritzlin has gathered metal musicians and got

ten them to turn their talents toward full-throttle swords & sorcery. (My reviews of the previous two volumes are here and here). Unlike last year’s installment, which too often wandered astray, the brand new Swords of Steel Volume III is almost all S&S. Serious, skull-splitting, blood-spilling, adrenaline-pumping S&S.

Following a short introduction by Mark “The Shark” Shelton (Manilla Road/Hellwell/Riddlemaster), the book kicks off with its best story — “Thannhausefeer’s Guest” by Howie K. Bentley (Cauldron Born/Briton Rites). I didn’t like his story “All Will Be Righted on Samhain” in the first collection, but I did like his “The Heart of the Betrayer” in the second.

The sole survivor of a ship sunk by enemy attack washes ashore, unconscious and suffering from amnesia, on a lonely island. When he first awakes, a woman in white whose name flickers at the edge of his memory, walks the beach beside him and tells him what he must do:

Rolling his head to one side, he glanced at her, his vision wavering in and out. Flaxen hair framed her pale-skinned classic beauty with high cheek bones and full red lips that seemed to have never smiled. Her icy blue eyes looked through him upon dim netherworld vistas far beyond the realm of man. She appeared familiar, but he didn’t know who she was. They had walked for only a moment when she languorously raised her right arm and pointed to the colossal citadel at the top of the hill in the distance. “You must go there,” she said in the monotone of a black lotus dreamer.

When he reaches the citadel he falls unconscious again. This time he comes to in a bed, still unable to recall his name, receiving medical attention from a beautiful, red-haired woman. Because he came from the sea, she names him Manannan after the ocean god.

She tells him he is in the house of the giant, Thannhausefeer. A tournament to the death between several great warriors is being held, and Manannan is invited. The prize is all the gold and jewels that can be carried away in a ship. 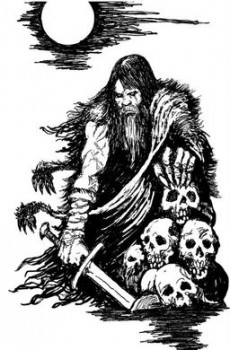 I won’t say more, lest I give the story’s game away. Bentley’s prose is good, and his sense of pacing on target. Never once did my attention flag, nor did I cheat and just scan a paragraph, hoping to get to the end just a little sooner. He’s done a good job here, successfully melding mystery, creepy atmospherics, and bloodletting, creating a tale that would be right at home in one of Lin Carter’s or Andrew Offutt’s anthologies. I can’t give a story a better commendation than that.

Bentley follows up his story with a poem, “A Paean to Mine Wolfen Self.” Like the story, it’s tight and brutal.

In “The Pirate Prince of Tarran” by Ernest Cunningham Hellwell (Hellwell), a boatload of faux-Barbary pirates capture a fat merchant ship, hoping to secure a map to a great treasure. There’s some decent monster-slaying action on hand here, but I found the story a bit long, with too much talking. For a story that takes up 48 pages in a 208-page book, it should move with more ferocity. Still, the monster-fighting’s pretty cool.

“The Key,” by Mike Browning (Nocturnus AD), is a mad nightmare of a story. War between the world’s major religions almost depopulates the earth, leaving it ripe for alien invasion. To change the present, the narrator builds a time machine (after gaining “hyperintelligence” by merging his own brain with alien technology). His plan is to journey to the past, destroy Christianity in the manger, and place himself over humanity.

Jaron Evil’s (Archspire, Funeral Fornication, Ringbearer, Almuric) “The Chamber Of Juleptsu” is simple and straightforward. A dwarf warrior must fight a giant, demonic spider. He does, and it’s a decently exciting encounter.

The book slows down a little with “Eldon” by Chris Shoriak (Ice Sword), but that’s not a bad thing. Eldon, a child of the forest people, was traded away to a family of the plains people. Used by them as a servant, they also treated him as a member of the family. Nonetheless, when he comes of age, they tell him he must leave the village and make his own way in the wider world. Out there he uncovers a dark secret that lays at the heart of his identity and his banishment. Lacking many specific details about the world, its cultures, or even the conflict that lies at its heart, the story reads less like a piece of consciously crafted fiction, more like a legend passed down and retold over the ages. Not really a work of S&S, it’s a worthwhile read and worthy element of the book. 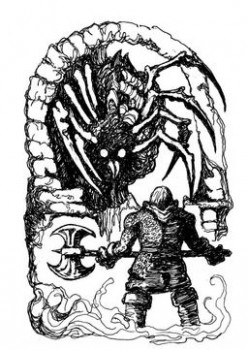 The slower pace is maintained with Jeffrey Black’s (Gatekeeper/Scythia) “Stormchaser.” Captain Derx is interrupted in his drinking by a group of young men. When he tells them his ship, the Orphan, isn’t in need of any more crewmen, they tell him they don’t want to sign up. They want to know about the ship’s previous captain, Beiran Stormchaser. There’s little action to the tale. Instead it’s Derx’s recollection of his predecessor, and the day he took leave of the mortal world to follow a strange path to places unknown. “Stormchaser” is a terrific reverie of days of adventure, and what one man did when the world became too small and constricting.

Swords of Steel III comes to a firmament-shaking conclusion with the third and final installment of Captain Blackthorne’s adventures, “The Scion at the Gate of Eternity,” by Byron A. Roberts (Bal-Sagoth). Following a map from Doctor John Dee, Blackthorne has sailed his ship, the Starfire, across strange seas and to impossible-seeming lands. The finale of an exciting “little” epic, this is another instance where I don’t want to give much away. Roberts doesn’t stint on action and monsters, and if you’ve read the previous chapters, you will not be disappointed at how Roberts ties things up.

When John O’Neill asked me about reviewing the first Swords of Steel two years ago, I jumped at the chance. As I’ve written previously, metal and S&S go together, fist in glove. But I had only moderate hopes for it. Just because they were musicians, or even lyricists, there was no guarantee the writers in the collection were going to be any good. When I actually read the book, I was proven wrong. By no means a perfect book, it still thunders along nicely and is a solid first offering. It’s the kind of fantasy writing of which, for my tastes, there can never be enough.

And as much as I liked Volume I, Volume III is even better. Ritzlin has improved as an editor, finding and selecting better stories. Several of the returning authors (among them Bentley and Roberts) have been improving from book to book. With a dynamite cover depicting a scene from “Thannhausefeer’s Guest,” this book is a cool addition to any S&S fan’s shelf.

Thanks for the review, Fletcher. I’ve read Volumes I and II. Look forward to getting my copy of Volume III. I’m assuming that the printing of this one has improved over Volume II?

@NOLAbert – Yeah, I forgot to mention that. I don’t know – I read a PDF which was perfect. I hope that translates to a decent font size and good color contrast this time.

I look forward to reading it.

Swords of Steel III has the same font and size as Volume I, as will all future DMR releases.