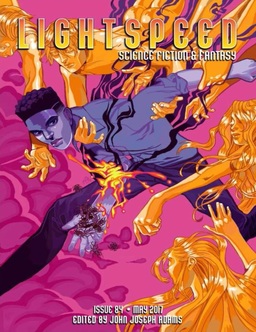 I often forget that, in addition to doing double duty as editor of two leading magazines (Lightspeed and Nightmare) and one of the most celebrated and successful anthologists in the industry (Cosmic Powers, What the #@&% Is That?, The Best American Science Fiction and Fantasy), John Joseph Adams also edits his own line of novels for Houghton Mifflin Harcourt. In his editorial in the most recent issue of Lightspeed, John brings up up to date on the exciting novels he’s bringing our way.

My latest novel acquisition for John Joseph Adams Books is Upon a Burning Throne and The Blind King’s Wrath, the first two books in a new epic fantasy series by Ashok K. Banker, about a group of siblings battling for control of a vast empire while a powerful demonlord pits them against each other… In July, we’ll be publishing two books: (1) Carrie Vaughn’s novel, Bannerless — a post-apocalyptic mystery in which an investigator must discover the truth behind a mysterious death in a world where small communities struggle to maintain a ravaged civilization decades after environmental and economic collapse; and (2) Sand by Hugh Howey, a reissue of his acclaimed indie-published novel.

In September, we’ll be publishing Retrograde by Peter Cawdron, a hard SF novel about an international colony of astronauts on Mars, who have been prepared for every eventuality of living on another planet except one: What happens when disaster strikes Earth?

In October, we’ll be publishing Machine Learning: New and Collected Stories by Hugh Howey, a short story collection including three stories set in the world of Hugh’s mega-hit Wool… In November, we’ll be publishing Molly Tanzer’s Creatures of Will and Temper — a Victorian-era urban fantasy inspired by The Picture of Dorian Gray, in which an épée-fencing enthusiast and her younger sister are drawn into a secret and dangerous London underworld of pleasure-seeking demons and bloodthirsty diabolists, with only her skill with a blade standing between them and certain death.

A bit further out, in Spring 2018, we’ll have The City of Lost Fortunes by Bryan Camp, about a magician with a talent for finding lost things who is forced into playing a high-stakes game with the gods of New Orleans for the heart and soul of the city.

This month’s Lightspeed offers original fantasy by Adam-Troy Castro and Kendra Fortmeyer, plus fantasy reprints by Greg Hrbek and Amal El-Mohtar, as well as original science fiction by Bruce McAllister and Susan Jane Bigelow, alongside SF reprints by Tobias S. Buckell and Seanan McGuire. The non-fiction includes author spotlights, Book Reviews by LaShawn Wanak, a review of The 100 TV show by Jenn Reese and Christopher East, and an interview with Steven Barnes by Christian A. Coleman.

Here’s a look at some of the books in John’s pipeline.

The exclusive content in the ebook version of Lightspeed this month includes an excerpt from Sand by Hugh Howey, and a reprint of Rebecca Ore’s novella “Hypocaust & Bathysphere.”

The cover this month is by Sam Schechter. Here’s the complete contents for the May issue.

“Ratcatcher” by Tobias S. Buckell
“This Is for You” by Bruce McAllister
“Dragonflies” by Seanan McGuire
“The Heart’s Cartography” by Susan Jane Bigelow

“James, In the Golden Sunlight of the Hereafter” by Adam-Troy Castro
“Paternity” by Greg Hrbek
“Octopus vs. Bear” by Kendra Fortmeyer
“Weialalaleia” by Amal El-Mohtar