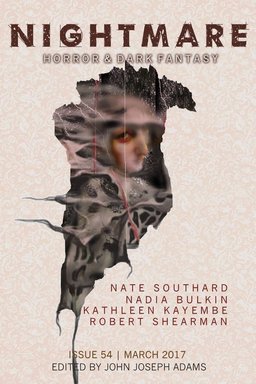 Usually with Nightmare, by the end of the issue I’ve picked a clear favorite story. The stories are always well-written, but there’s usually one that especially moves me. This month, we’ve got two haunted towns and two haunted families that consistently play with the concept of who is haunted and who is the haunter. And I just can’t pick a favorite.

It starts with “Things Crumble, Things Break” by Nate Southard, about a town that’s slowly dying from a chemical accident. Or from something that they’re told is a chemical accident. While the author never mentions Flint (either in the story or in the proceeding interview), it’s impossible not to read this story of a toxic, abandoned city without thinking that tragedy wasn’t at least a subconscious influence.

Next up is “Alice Through the Plastic Sheet” by Robert Shearman (originally published in Remember Why You Fear Me: The Best Dark Fiction of Robert Shearman), that starts with the familiar trope of the boring suburban family being disturbed by loud neighbors … only to veer off in a David Lynchian direction rather quickly.

“You Will Always Have Family: A Triptych” by Kathleen Kayembe starts with a noise in a locked room (yet another familiar horror trope) and slowly reveals a tale of possession that alternates between three different points of view (hence the “Triptych” in the title). Kayembe doesn’t spare with the gruesome imagery, but at its heart this is a story about family and what it means to different people. And while I normally hate horror stories that delve too much into explaining the physics behind the supernatural, this one puts in just enough that we understand the stakes, while also explaining why so many possessed people end up looking so ragged so quickly.

It all winds up with “Seven Minutes in Heaven” by Nadia Bulkin (originally published in Aickman’s Heirs, appropriately enough), another “haunted town” story that has a twist ending that actually comes up in the middle. So you might begin reading this story thinking, “Oh, I know where this is going,” and you’re right, but that twist gets revealed in the middle, leaving the reader to sink even deeper into the nightmare. Because the only thing worse than finding a monster in your closet is realizing that there’s another closet behind that one.

As with all Nightmare issues, you can certainly read all of the stories online for free, but these publications only survive with financial support, so it’s really better if you drop $2.99 for a copy at www.nightmare-magazine.com/issues/mar-2017-issue-54.