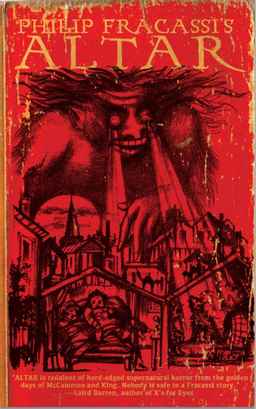 “How are they moving like that? she thought. A few adults were running and then — at that moment — instinct took over, and she darted toward her son, not noticing when she knocked down another woman who was kneeling and tugging at her hair, not hearing the new screams, the screams of terror that were replacing the sounds of life like a spreading fungus…” (pgs. 40-1)

Back when I was a graduate student, back when I thought I was so busy, I actually had quite a bit of time to keep up on the newest horror writers coming down the pike. Now that I’m in the so-called real life world of jobs and mortgages, I find it difficult to stay on top of new horror. But I still keep my ear to the ground, and one name that I keep hearing about over and over is Philip Fracassi and his new novella Altar. Now that I’ve finally read it, I can see what the fuss is all about.

Before getting into the story, let me first say something briefly about the creepy cover art of Altar by Matthew Revert (see his work on the cover of the 2014 tribute anthology to Laird Barron, Children of Old Leech). This cover has, as far as I can see, little to nothing to do with the story within, though it interestingly sets a good mood for later in the story. This is not a complaint, just a note to those who haven’t read it yet. I wouldn’t want this cover to foul up someone’s enjoyment of this story with false expectations. And to be fair to the publisher, I’m not sure what would’ve counted as an apt piece of art for the cover of this horror novella. Why is that?

This story is about a summer’s day at a local community pool. But it’s this seemingly innocent setting that really sets the reader up.

Though not set in any noticeably particular time period, Fracassi really transported me back to those lazy summer days when I was a kid. I was completely immersed in Fracassi’s detailed account of a family on their way to their local public pool and what happens when they get there. You can almost feel the sun, you can taste the chlorine, you can smell the suntan lotion, and you can even almost smell those nasty public restrooms. You can also remember the excitement of your friends at that age doing the sorts of things that friends at that age do at the public pool. In fact, at twenty-five pages in, which is half way through the story, I stopped to look at the cover again just to make sure I was reading a horror novella. At this point, it was just a very happy (and for me very nostalgic) story. There was nothing about it that suggested a horror story.

That’s not to say that there were not hints up to this point that, to quote Shakespeare, something was rotten in Denmark. Fracassi tells the story from the first-person viewpoint of several characters. But the main character is Gary the young boy going to the pool with his teenage sister Abby and their mother Martha. We get thoughts from Gary, and later from Martha herself, that mom has been drinking a little too much lately. As details unfold the situation seems to be predicated upon Martha divorcing Gary and Abby’s father. As the inner dialogue of the characters slowly reveals, though everything seems perfect and cheery on the outside, there’s plenty of imperfection and clues of less than cheerfulness going on within.

And Fracassi builds masterfully upon this subtle tension — something that I still can’t quite put my finger on. As the family arrives at the pool and as they begin their day there, several other characters are introduced, both sympathetic and unsympathetic. These characters build further upon the theme that this world is far less perfect than it appears. This slow and building tension eventually finds its crescendo in a violating act in the real world which coincides with… with… with… something, something supernatural.

I don’t feel that I can say anything more without giving anything away. The ending, the last ten pages, are absolutely horrific and come seemingly out of nowhere. Let’s just say it was not a good day at the pool!

I was left stunned by the end of the story. But I was also left with a lot of questions at the end. First and foremost, why was this story called Altar? I’m still not completely sure. But here’s a guess: Perhaps the horror manifests at the end due to the fact that these people are manifest examples of those who would use or sacrifice others for their own selfish ends. Not sure. Another question, why do so many of the children at the pool seem to want to give in to the horror at the end? Not sure. What exactly was the horror? Completely not sure at all. Don’t get me wrong; my questions are not implicit criticisms. Nor do these questions represent, I believe, any sort of wishy-washiness on the part of Fracassi. I think there are some fairly deep underlying themes here and this is definitely a story I plan on coming back to. I can see why there is so much buzz about Philip Fracassi. In Altar you are led along for about three/fourths of the story with this engaging day with its subtle building tension. Then you’re hit with a gut punch that never quite leaves you, even after the story is over.

Fracassi is continuing evidence that the golden age of short horror fiction is in no abatement. This is a bold new voice in horror. Altar was published in 2016 by Dunhams Manor Press. It is $6.99 for the paperback, $3.99 for the ebook. It is more than worth its price.