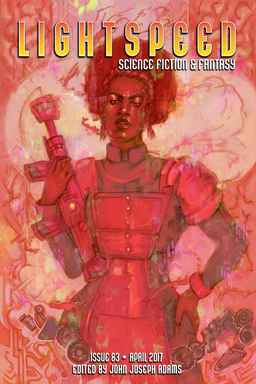 I’ve fallen into an odd routine with a few online fiction magazines. Instead of reading them as they come out, I hang out at Tangent Online and use their reviews to point me towards interesting stuff. It works out pretty well, and for the most part the TO reviewers keep on top of the flood of online fiction a lot better than I do. Victoria Silverwolf’s review of the April issue of Lightspeed magazine appeared on Tuesday, and it’s got several stories that sound right up my alley.

“Infinite Love Engine” by Joseph Allen Hill is a lightning-paced tale of a cyborg sent on a mission to save the universe from a thing which causes all lifeforms to love it. Along the way she encounters a wide variety of bizarre beings, from a dangerous “braincube” to a planet-sized entity known as the Drowning King. Narrated in a highly informal style, this wild and woolly space opera doesn’t seem intended to be an out-and-out comedy, although it’s hard to take it too seriously with characters called Beeblax and Zarzak…

Much more intimate is “Seven Permutations of My Daughter” by Lina Rather, although its scientific content is no less fantastic. The narrator is a physicist who has built a device which allows her to journey to parallel universes. For story purposes, this might as well be magic. She uses it in an attempt to find a world where her estranged, heroin-addicted daughter is safe and happy…

“Remote Presence” by Susan Palwick seems at first to take place in our own mundane reality. We soon find out, however, that the characters all accept the fact that ghosts are real, and that sometimes they must be helped — or forced — to move on to the next world. The protagonist is a hospital chaplain. In addition to his many other duties, he also has to deal with an elderly woman who has died in the emergency room and who continues to haunt it, only because she is lonely and wants someone to talk to….

This month’s Lightspeed offers original fantasy by Susan Palwick and Jess Barber, and fantasy reprints by Genevieve Valentine and Charles Yu, and original science fiction by Joseph Allen Hill and Lina Rather, plus SF reprints by Paul Park and Nancy Kress. The non-fiction includes an editorial from John Joseph Adams, author spotlights, Book Reviews by Andrew Liptak, a review of Resident Evil: The Final Chapter by Carrie Vaughn, and an interview with Aliette de Bodard by Christian A. Coleman.

The exclusive content in the ebook version this month includes an exclusive reprint of Michelle West’s novella “The Memory of Stone,” and am excerpt from Skullsworn by Brian Staveley.

The cover this month is by Odera Igbokwe, illustrating “Infinite Love Engine” by Joseph Allen Hill. Here’s the complete contents for the April issue.

“Infinite Love Engine” by Joseph Allen Hill
“If Lions Could Speak: Imagining the Alien” by Paul Park (from If Lions Could Speak and Other Stories, 2002)
“Seven Permutations of My Daughter” by Lina Rather
“Someone to Watch Over Me” by Nancy Kress (from IEEE Spectrum, June 2014) 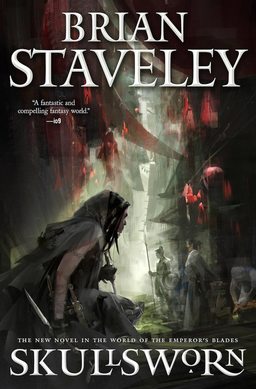 Of the originals, like Victoria, I enjoyed (and recommended) “Seven Permutations” and “Remote Presence” and agree that the SF is fantastic and the fantasy feels a little like SF. I don’t always care for such mixtures but these work. That’s only one facet that works, though – the psychological/emotional elements of each were the strongest parts.

Jason – thanks for the recs! By the way, I enjoyed your April Online Fiction Summary at Featured Futures.

Sorry for being so ridiculously late but thank you very much. 🙂