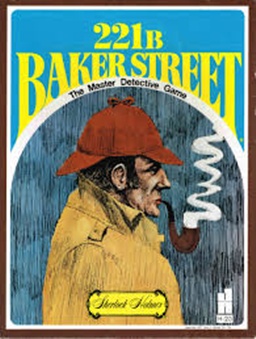 Last week, I looked at the reissued Sherlock Holmes: Consulting Detective (SHCD), originally released in 1981. That game was undoubtedly influenced by 221B Baker Street: The Master Detective Game (221B), which had come out a few years earlier in 1975.

In 221B, two to six players take on the role of Sherlock Holmes, though there’s a reference in the rulebook to being “Watsons.” It makes no difference, but I’m gonna go with being the world’s first private consulting detective, myself.

The game comes with 20 Case cards, generic, colored plastic player pieces, Scotland Yard and Skeleton Key “cards,” a solution checklist pad and a slim booklet with all the rules, clues and case solutions.

Unlike SHCD, which included a map, 221B uses a board. Players start and finish at 221B Baker Street, moving to various locations on the board, such as the Apothecary, Hotel, Museum, Tobacconist, etc. Each location is assigned a number in each case. When the player moves to the location, they look up the corresponding number in the clue section of the rulebook. The clue, such as “Earl Longworth has constant headaches” is recorded on the solution checklist – kept secret from other players. 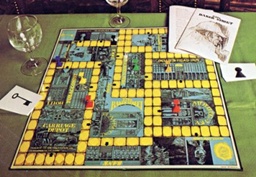 A Scotland Yard card can be placed on a location, blocking other players from accessing the clue there: Unless another player uses a skeleton key to “unlock” the location. If a player uses either card, they can get more of each type at specific locations on the board. So, you’ve got a little strategy: do you block an important clue; tagging it with a red flag? Or block a minor clue and try to trick the other player into pursuing it and using their key?

Each scenario has three things to deduce: usually some variation on who did it, why did they do it and some third element, such as where did it happen or what was the murder weapon. When a player thinks they have all the clues necessary to solve the three components, they have to return to 221B Baker Street and announce their conclusions. 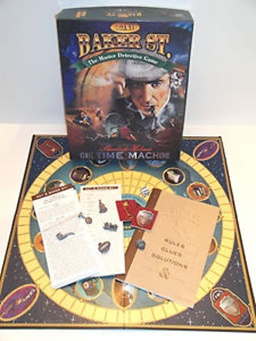 If the player is substantively correct, they win. If any element is wrong, play continues for the other players. The one who guessed wrong is a silent bystander.

There is a LOT less text to read and analyze than in SHCD. Sometimes, we’re talking about a two-word sentence vs. a page and-a-half of text. Obviously, there’s far less to digest in 221B. My eight-year old son has played both but prefers 221B for its simplicity. And because you get to roll a die!

There is zero replay ability in this game, but there have been eight expansion packs with 20 cases in each, so that’s a total of 180 cases available. Many are out of print, but can still be found on ebay. A UK edition was reissued as recently as 2014 and included 75 cases.

In 1996, the publisher produced a new version of sorts: 221B Baker Street: Sherlock Holmes & the Time Machine. As you can guess, using essentially the same game play, you now solve such crimes as the Black Dahlia murder, the JFK assassination and even try to figure out what happened with Elvis’ death. I’ve never played this, nor do I have any inclination to do so.

Overall, 221B is a pretty fun game. I think its strength is in its lack of complexity and it is a good Holmes-themed game to play with kids.

THE JOURNEYS OF PAUL

The options for Christian board games are limited, to say the least. You can find a Bible trivia game with no trouble, but that’s not quite the same. However, I have found one game that is a hit with my son (he who beat me at 221B – above). The Journeys of Paul is a “build and race to the finish” game for one to six players. Starting in Jerusalem, players have to build three churches in various cities and get to Rome.

Play is simple, but winning can be difficult. Seven cell groups are required to build one church in a city. A church can be built in any city, but at the start of the game, each player receives three City Cards. When they begin to build a church in that city, they get three bonus cell groups. Building in any other city yields no such bonus. A player earns two cell groups each turn they ‘build a church:’ if nothing untoward happens! Once the seventh cell group is earned, a church token is placed on that city. 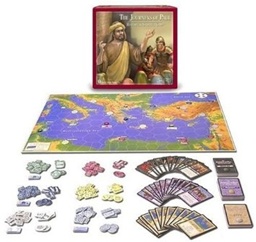 When not building a city, the player chooses to either move by land or sea (you have to have a boat, of course). A player moves three spaces across the hexed map: unless…

The key is the Event Card taken at the beginning of each turn. An Event Card can have some impact on the player, depending upon whether they are building or moving. Shipwreck!, Roman Soldiers Make Arrest, Famine, Ridiculed by Jewish Leaders: only bad things happen with the Event Cards: nothing good. The player may not be able to build a church that turn, or only move one space, instead of three.

However, each turn, the player also gets an Opportunity Card. And those are always good! Some counter specific Event Cards, canceling them out. Others might let the player move an extra two spaces, or get one bonus cell group, or use a ship. Opportunity Cards are often the difference in a tight game.

The players compete, but there is no direct interaction between them. After completing the third church, the players head for Rome, where they have to finish. Event Cards can cause a player to lose a cell group in a city where they already have a church. And if they don’t have a deacon there for protection, the church is downgraded and the player either has to go back and get more cell groups, or simply write it off and build a new church. I’ve lost games because of that one.

The last game I played, my son was so far ahead that I gambled and used a ship to catch up. I managed to build my third church in Carthage, but there was no way to get to Rome without another ship, which I didn’t have. I never did get another ship card and, after being set back by a shipwreck, he managed to get to Rome and win.

There’s a lot of luck involved in this game, and some, but not a lot, of strategy. But that makes it an easier game for younger or non-gamer players. The board represents the northern and southern routes that the apostle Paul traveled. The player is represented by a colored glass token and the rest of the pieces are just colored cardboard chips. Nothing extravagant here, like the components in the Dungeons and Dragons Adventure Game line.

A game takes about a half hour or so and is easy to pick up. With the dearth of Christian board games, this is one of the better ones.

In two weeks, my son and I have played 16 cases. And he often puts on a deerstalker and even speaks as Holmes once in awhile. This has really been a good Holmes experience for him. I’ve had to tone down some of the elements, like adultery, but definitely works well for this 8 year old.

He must be a smart kid Bob. “puts on a deerstalker hat”—-now that is cool!

I agree, I can’t say enough good things about this game. It was one that should have been more popular. Like Cosmic Encounter maybe the remake will bring it popularity. This is a unique game, and tough. Every case solved feels like a big victory. I actually had a case where I TIED Sherlock Holmes. Most of the time he lapped me by a mile.

This one doesn’t have a Holmes score or anything like that.

A Deluxe Edition has come out, with 200 cases, including some new ones. Definitely the way to go if you’re interested in this game.