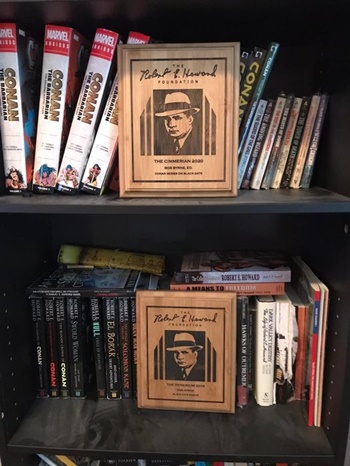 I am the in-house mystery guy (that’s how I hoodwinked John O’Neill into giving me a weekly column. Eight years later, he’s still trying to configure the Fire Wall to keep me from getting up my Monday morning post! I organized the Discovering Robert E. Howard, and Hither Came Conan series’ here at Black Gate. And contributed, of course. That’s the advantage of being in charge of them!

Robert E. Howard is my second-favorite writer (trailing only the terrific John D. MacDonald), and I’ve written quite a bit about him here at Black Gate. With more to come, of course. I’ve got part of a series written, in which I’ll look at the first dozen of Roy Thomas’ Conan the Barbarian comics; including how the series came about. And I’m pretty sure Solomon Kane will succeed Hither Came Conan in the all star contributor series.

I came late to Howard. I have loved mythology since grade school. The Iliad remains one of my all-time favorite stories, and I have a copy of Schleimann’s Ilios. That led me to Dungeons and Dragons in Middle School, and I know I was reading The Lord of the Rings somewhere around the 8th grade. I was a fantasy fan for life.

I bought the first Ace Conan paperback, but it sat on my shelf, unread. Not sure why. I know I read David C. Smith’s Oron, but not that one. As my son was playing with the Thomas the Train layout in the kids section of Barnes and Noble one day, I started reading the first Dely Rey Conan book. I read that the next time we were there. And I bought it. And Robert E. Howard would move up the ranks of my favorite writers, as I bought more Del Reys. Conan still holds the top REH spot, followed by El Borak, and then Solomon Kane. But I just continued to like Robert E. Howard, more and more.

I’m off to my first-ever Howard Days in a few days! It’s gonna be great!!  Here are all of my own Robert E. Howard-related essays here at Black Gate. A couple are pretty good, I think. Mostly in the first two sections below. Check out a couple, please. By Crom!

Ruminations on ‘The Phoenix on the Sword’

Arthurian Elements in The Conan Canon 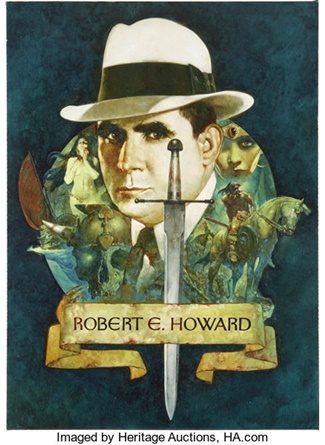 Some Conan Pastiches are More Equal than Others

‘Iron Shadows in the Moon,’ The Bible, and Dark Horse

The Animated Red Nails That Never Was

REH Pastiches Coming in 2018 (I was hoodwinked on that one…)

Adventures in an Age Undreamed of – Part One

Hi, Bob. Let me welcome you to Howard Days in advance. I look forward to meeting you.

See you in Cross Plains later this week!

stay safe and have fun brotha