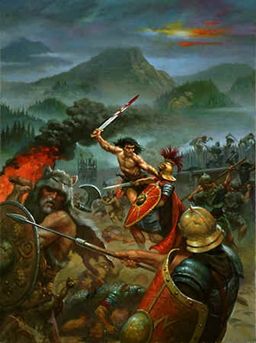 I’ve got a couple Holmes-related posts in the works, but am not done researching any of them (no, I don’t just make up my posts as I go: I actually put some thought into them; even if  it may not always appear so). Fortunately, I’ve got no shortage of other areas of interest that I can use to fill the gap (I still haven’t figured out how to get a baseball-related post here. Although, if I still had my copy of that Daryl Brock book.  Maybe something on W P Kinsella.).

The esteemed Ryan Harvey used to review Conan pastiches here at Black Gate. I am absolutely a Robert E. Howard and Conan fan. Perhaps you read this recent post? So, looking to indulge my non-mystery interest (I really want to write something on Tolkien’s Nauglamir, but it’s not even outlined yet), I turned to Conan.

Harry Turtledove is best known for his alternate history novels. I’ve read little Turtledove, so I can’t expound on them. However, one that I did read and enjoyed very much was The Guns of the South, which involves time-travelers bringing Robert E. Lee AK-47s, changing the outcome of the American Civil War (it’s better than it sounds). I definitely enjoyed it more than his other alt-Civil War book, How Few Remain.

Back in 2003, Turtledove joined the list of authors putting out Conan pastiches for Tor Books. Fans of Conan know that this line was quite hit and miss. Conan of Venarium was the 49th and last of the Tor originals, coming six years after the previous entry.

You can read Ryan’s review of that one, here. I’ll include a quote that I think sums up his thoughts on Venarium’s predecessor:  “I am glad to report that Conan and the Death Lord of Thanza is superior to Conan and the Mists of Doom. Unfortunately, that still ranks it as the second worst Conan novel I’ve read.”

I’m a pastiche fan. There have been more written about Sherlock Holmes than any other character. Some are excellent, far more are bad and some are dreck. You just have to be a bit choosy. I think it’s the same regarding Conan (though the excellent ones are pretty rare). 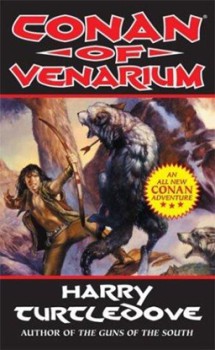 In William Galen Gray’s chronology, Conan of Venarium is the very first Conan tale, followed by “Legions of the Dead” and “The Thing in the Crypt.”

Side Note – The short “Crypt” reads like a Dungeons and Dragons encounter and I think it’s a nice little piece.

On the one hand, Venarium is not actually a bad read for a sword and (not very much) sorcery novel, but it has some real problems with fidelity to Robert E. Howard’s Conan creation. In fact, if you can forget it’s supposed to be a Conan prequel, it works pretty well. However, as a tale of the sword swinging barbarian, it has quite a few holes.

The story takes place before the first of Robert E. Howard’s tales, though he did allude to the Aquilonian outpost of Venarium, which was overcome by Conan and his people. Turtledove faces a problem: how to allow the Aquilonians to establish Venarium in Cimmeria and to keep it standing? The Cimmerians of the Conan saga don’t come across as meek or submissive. I imagine something akin to Fort Tuscelan’s struggle for survival in Howard’s “Beyond the Black River.”

For me, Turtledove does not pull it off very well. The way Venarium is founded and the Cimmerian response is not at all what I depict. Regarding Conan’s home village, Duthil: it comes across as your standard medieval village. There are houses with several rooms, shops, a main street: this does not remotely strike one as a barbarian community.

And we’re at the root of the problem. An unlikely premise (the way Venarium was established) and an unbelievable depiction of Cimmeria. It’s going to be hard to win over a knowledgeable Conan fan after this start.

A Conan tale with what I believe to be a much more realistic portrayal of Howard’s vision is John Maddox Roberts’ Conan the Valorous. Further, the Conan Role Playing Game supplement, Cimmeria, presents a more palatable view of the land and how the people lived.

The attitudes of the Cimmerians seem awfully civilized for a nation of, well, you know, barbarians. In fact, again, it seems rather medieval. To his credit, one thing Turtledove does well is incorporate the Aquilonian soldiers into the story. Their scenes give some depth to the tale. This is offset somewhat by the stereotypical bad guy: in this case, Count Stercus. He is about as deep as Snidely Whiplash and the use of his primary flaw as foreshadowing is about as subtle as the Civil War was an issue of state’s rights (that is to say, not at all).

The last chapter shifts to a tongue-in-cheek style, a tone completely out of place with the entire book. It is just about as silly as the chapter titled, “The Temple Out of Time,” which does not remotely fit into the story. I haven’t read all of the Conan books yet, but this is the first I’ve come across with no sex. Perhaps not surprising, since he’s only 15 at the end of the tale, but it is another uncharacteristic element of the book.

While this seems like a pretty negative review, I didn’t mind reading this book: it just isn’t an authentic Conan tale. It reminds me of Quinn Fawcett’s Mycroft Holmes novels. They were nice Victorian-Era James Bondish books: they just weren’t Mycroft Holmes. In case you don’t know, Mycroft was Sherlock Holmes’ smarter, older brother and not at all a secret agent type of guy.

But I hoped for a better Conan coming-of-age tale. Since the copyright holders of Conan are inflexible regarding official pastiches, it is unlikely anyone will be given permission to tell the Venarium story again. Hopefully an unauthorized attempt will succeed where this one failed.

It’s Barbaric — I am a big fan of Mongoose Publishing’s D20 Conan RPG line. I haven’t played any of it, but I’ve read most and they did a superb job of capturing the Conan feel (both first and second edition).  Modiphius will be putting out a new authorized 2d20 RPG, Robert E. Howard’s Conan: Adventures in an Age Undreamed Of. It will include crossovers with the recent massively successful Conan board game Kickstarter from Monolith ($3.3 million!).

Did not know that, Elizabeth. Fits the depth of the character, though.

With respect to writing about baseball, I would recommend Michael Bishop’s BRITTLE INNINGS.

[…] Turtledove’s Conan of Venarium came out in 2002. It’s been fifteen years since an REH pastiche. And even that one came five […]

[…] Writers (Black Gate): “Of course, you saw yesterday’s Black Gate post on Heroic Signatures, the new digital/gaming partnership, which includes the rights to about two dozen Robert E. Howard characters and stories. With the recent releases of Modiphius’ Robert E Howard’s Conan: Adventures in an Age Undreamed Of RPG, Monolith’s Conan board game and Funcom’s in-beta Conan: Exiles video game, Conan is a very viable gaming brand these days. And Funcom’s Age of Conan MMO (which I play) is still going strong as it approaches the decade mark. But fans of Conan’s creator, such as the contributors and readers of our recent Discovering Robert E. Howard series, are yearning for new pastiches featuring Howard’s characters. And not just Conan, but Solomon Kane, El Borak, Breckenridge Elkins and Steve Harrison, to name a few. Aside from some Age of Conan tie-in novels, the Conan pastiche market dried up when Tor finished its series in 2003 with Harry Turtledove’s Conan of Venarium.” […]