Paul Kearney’s first novel was The Way to Babylon (1992), followed quickly by A Different Kingdom (1993) and Riding the Unicorn (1994). With his fourth novel, Hawkwood’s Voyage (1995), he began an extremely ambitious story cycle that eventually ran to five volumes and over 1,600 pages: The Monarchies of God.

The Monarchies of God was originally published in the UK by Gollancz, with each volume released as it was written. In the US, however, publisher Ace Books tried an unusual experiment. They waited until the series was virtually complete, publishing the first volume here in the US in February 2002, and subsequent books one per month, in March, April, and May. The final volume was released in January 2003, virtually simultaneous with its UK release.

I have to assume the experiment was not a success, as the books went out of print rather quickly, and Ace has shown no particular appetite to repeat it since.

Here’s the complete sequence (publishing dates are the UK editions):

I admit I’m rather surprised. Kearney has a fine reputation among fantasy fans, and his more recent efforts — such as The Ten Thousand and the Macht Trilogy — have been well received. It seems a reasonable bet to me (as it probably did to Ace, thirteen years ago) that fans would react well to having a minimal gap between volumes. Imagine if the first five volumes of George R.R. Martin’s A Song of Ice and Fire had been published a month apart!

It didn’t turn out so well, however. There are some competing ideas for why this might be.

Perhaps The Monarchies of God just didn’t translate well for an American audience. Or perhaps Ace spread their marketing dollars too thinly across all five books. Perhaps Paul Kearney was just too much of an unknown commodity on this side of the Atlantic. Or perhaps publishing a new volume every month just didn’t allow enough time for buzz to spread, and for the word to get out about this series.

I look at it a little differently, however. I tend to think that Neil Gaiman has it right; that for serial fiction — like comic books and epic fantasy — to really succeed, the time between the books is crucial. Here’s Gaiman, from a 1994 interview in The Comics Journal:

One thing that I definitely learned over the years is that serial fiction has a level of depth and power and involvement for the readers that they don’t get from reading something all at the same time. I still think that’s one of the weaknesses of comics but I’m also now tending to think it’s one of its strengths … People can get involved. It’s something that fascinates me and something that I genuinely don’t understand…

The action of living with characters for a number of years fascinates me. The fact that readers get to live with these characters for years and worry about them and think about them. I find it a fascinating phenomenon. 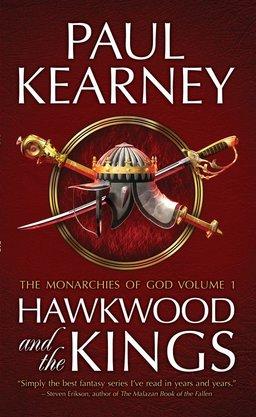 [Thanks to Matthew David Surridge for reprinting that quote in his Black Gate article “Some Thoughts on the Nature of a Serial.”]

I think there’s something to this. Reading a single issue of Sandman every month, or watching a TV series one episode per week, is a different experience than reading a Sandman graphic novel or binge-watching all 13 episodes of Daredevil. When your favorite characters live in your head for months between episodes, I think you start to care about them more — and I think they become more real.

It’s strange to think that by giving readers what they craved — every volume of The Monarchies of God, virtually all at once — the publishers may have damaged the chances of its success.

The Monarchies of God was published in the US by Ace Books between January 2002 and January 2003. All were paperback editions with a $6.50 – $6.99 cover price. The covers are by Steve Crisp. There were no digital editions.

The series was returned to print by Solaris in two omnibus editions in 2010:

Digital editions of both volumes are available for $6.99.

Like Matthew Stover, Kearney is one of the great unsung fantasy writers of the last two decades. His earliest books are probably his most diverse work, in a way, and more challenging for it.

I strongly, strongly urge those who haven’t to read the Monarchies series – while he does riff off established European history from way way back, Kearney makes it his own. This is a real saga, with many many great and believable characters. While I personally think the last book is a little rushed, as a whole, the entire series deserves more of a following.

Thanks for the mini-review Robert!

These books are amazing – I read them when they came out and still remember them.

However, I am horrified that they are now “vintage”!!!

The first one came out 20 years ago Martin… proof that we’re now old men!