Funcom is the developer of the Age of Conan (AoC) MMORPG. They’ve currently got a resource/action RPG, Conan: Exiles, in beta, scheduled for a May, 2018 release. I’ve played quite a few hours of AoC and think it’s a very good MMO, mixing elements from Robert E. Howard’s original stories and some of the pastiches. I haven’t tried Exiles yet.

The announcement said that Funcom will be focusing on partnerships and third party developers, indicating they want to license the properties to get games made. Funcom isn’t a mass-producer, so this may well be a way to leverage the REH property. As part of this move, Funcom got a $10.6 million investment from a Swedish company.

Personally, I don’t expect to see a Steve Harrison or Sailor Steve Costigan game. But you’ve got to figure this deal was made to get something out there. And if somebody is sinking $10 million into Funcom, it isn’t just a bunch of paperwork. I’d rather see Cabinet Group actually get some quality pastiches out there, but that’s just me.

As I said, Age of Conan is a good game, so Funcom’s track record is okay with me headed into this new territory. The first product will be a third party game out in 2018.

Below is the full press release:

OSLO, Norway – December 18th, 2017 – Game developer and publisher Funcom is excited to announce that it is teaming up with Cabinet Group LLC to establish HEROIC SIGNATURES, a new company that will hold and manage the interactive rights to numerous attractive intellectual properties from the writings of Robert E Howard and the Swedish original pen & paper and board games. These properties include Conan the Barbarian, Solomon Kane, and Mutant Chronicles, all of which have been made popular through motion pictures, comic books, novels, tabletop games, miniatures, and more. Other properties include Dark Agnes, Kult, Kull of Atlantis, Mutant: Year Zero, and El Borak. HEROIC SIGNATURES’ portfolio includes a total of 29 different intellectual properties making up several decades worth of rich worlds and characters.

“Heroic Signatures is now the guardian and caretaker of a veritable treasure chest of incredible worlds, each of them ready to be brought into the interactive space,” said Funcom CEO, Rui Casais. “Any developer or publisher will be able to license these properties, and our ambition is to see a multitude of games grow from these worlds and to see the properties strengthened across the board to the benefit of everyone who works with them.” 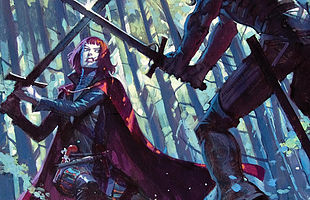 Cabinet Group LLC controls the overall rights to all properties. Funcom and Cabinet Group LLC will each own 50% of HEROIC SIGNATURES, which will control and manage the interactive rights to each property, i.e. the right for video gaming on all platforms.

Funcom will utilize these properties, in addition to the Company’s internal properties, as part of an increased focus on co-development and publishing partnerships with third party developers. Funcom has previously shared that it will be going into select publishing partnerships with developers, and these partnerships are intended to be targeted to leverage the core strengths and markets of Funcom, with focus on quality over quantity of projects. The first of these projects developed by a third party and published by Funcom, will be revealed next year.

To fund publishing partnerships with third party developers, and secondarily to have more flexibility in investing in production of new games internally, Funcom has secured a 10.6 million USD investment from SwedBank Robur Fonder AB which has previously invested in several other major game developers and publishers.

“We see this as a new giant leap in Funcom’s turnaround,” says Erik Sprinchorn, fund manager at SwedBank Robur Fonder. “Building on its impressive recent development, multiple new revenue sources from IP and strategic expansion into publishing will increase cash flow robustness and boost further growth. Combined with additional funding and a reverse split the company is now really well positioned as an attractive long-term investment.”

So no books? Well, better than no development, I suppose. Not a gamer so this does nothing for me, but I still have hopes for pastiche stories and possibly a short story anthology in honor of REH. Hopefully…

Yeah, this seems to be all about digital. I sent an email to Cabinet Group, pointing out that while board and video games and RPGs featuring Conan are out there these days, REH fiction is being ignored. I pointed out the potential for anthologies, novels and magazine outlets.

I’m sure they’ll just jump right on that now that I’ve raised the issue….

Especially since this is on the Contact Us page: ‘Please be advised that we do not accept/consider any unsolicited creative ideas,
suggestions or materials sent to us.’

Hey, the 2018 Marvel calendar is basically a reprint of the 1975 Marvel calendar. Which is cool and retro and all, but it features a month given over entirely to Conan. Complete with elegant Barry Windsor-Smith illustration.
This has caused a small wave of wonderment among fans, curious why the barbarian would get a month of the Marvel calendar since Marvel hasn’t had the rights to the property in many years.
And this, in turn, has led some to speculate that perhaps the Cimmerian has returned to the Marvel fold.
Has anybody out there heard anything to either trash or substantiate this?
The idea of Conan attached to the huge power that is Marvel/Disney provokes both hope and trepidation.

[…] more use out of the digital/gaming rights to almost two dozen REH characters and stories. I quickly wrote up a post for BlackGate.com. Back in January of 2015, I wrote a Black Gate post titled, Ya Gotta Ask. […]

[…] (Black Gate): “Of course, you saw yesterday’s Black Gate post on Heroic Signatures, the new digital/gaming partnership, which includes the rights to about two […]