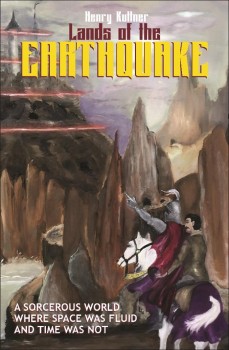 Once upon a time, Ace Books published hundreds of double novels. It’s a simple thing: a pair of novellas, often by two different authors, were joined back-to-back, done in such a way that you’d have to flip the book upside down to read the second once you’d finished the first. Black Gate has been posting Rich Horton’s reviews of many of these old books for some time now. Many times a newer author’s work was paired with that of an established author in order to garner more attention. It was a clever idea that allowed lots of shorter works to get in print.

DMR Books, publishers of the Swords of Steel anthologies (reviewed here), has revived the format with the release of Howie Bentley’s Under a Dim Blue Sun backed with a reprint of Henry Kuttner’s 1947 Lands of the Earthquake. I reviewed the former this past August but neglected the latter, so I’m back with a look at a seventy-year-old tale of cross-planar travel and alien wizards.

Henry Kuttner is one of the greats of golden age sci-fi and fantasy. Under his own name as well as over a dozen pseudonyms, on his own and in collaboration with his wife, C.L. Moore, he wrote hundreds of stories. They range from Lovecraftian pastiches he crafted in his youth, to early additions to the annals of swords & sorcery, to classic sci-fi tales such as “Mimsy Were the Borogoves” and “The Twonky.”

There are several published discussions regarding which Kuttner stories are solo creations versus written as joint efforts with Moore. If the second, the question then is how much was done by one or the other. According to one review of Lands of the Earthquake, it was written not by Kuttner at all, but by Moore. I don’t know, and I freely admit that I haven’t enough experience with either to make a claim one way or the other.

Throwing folks from the real world into fantastical ones seems to have been a common story trope back in the forties (see Pratt and deCamp’s Harold Shea stories and Heinlein’s “The Unpleasant Profession of Jonathan Hogg”). One morning, William Boyce of New York City wakes up to discover he’s lost an entire year of his life. For the next two years he tries to discover what happened. Only a few small memories and a strange crystal found in his pocket provide him with vague clues. Eventually his search brings him to an “ancient brownstone” by the East River, and a basement decorated with tapestries, silk, and jewels. When the candle spontaneously lights, somehow he knows he must hold the crystal up to the flame. When he does, reality begins to warp and shift. Suddenly, memories of a woman of great and terrible beauty rise up inside him. He can remember she was in the basement before him and somehow crossed into somewhere else, and she wanted him to follow.

And follow her he does. Boyce follows the mysterious woman’s trail and ends up in an alien world. Before finding refuge among a band of Norman Crusaders he is chased by a strange being known as the Huntsman, along with his pack of man-faced beasts. Once among the Crusaders, Boyce becomes caught up in their centuries-long struggle with the wizard-king of a place known only as the City. The Crusaders were caught by strange magics in the Holy Land during the First Crusade and since then have been trapped, suspended in a place where time doesn’t pass. 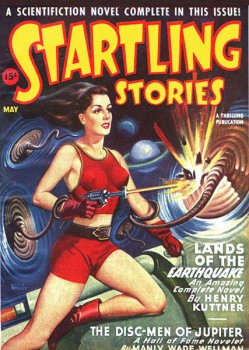 Contrary to what they believe, the Crusaders are only pawns in a game being played at their expense by mysterious figures from the City. When Boyce is forced to become intimately involved in this contest between powerful beings, things take a turn for the weird and disturbing:

He was not alone.

Someone walked behind him, at his very heels, someone’s breath fanned his cheek when he turned. But the someone was transparent as the air. He saw in the mirrors only himself in those dizzy myriads. He went on.

Something padded before him on soft feet. There was a clink of metal, like a blade in a scabbard, and a muffled laugh and something rushed by him down the hall with a thumping of feet and a gust of displaced air when it passed him. Something whistled by his face, the wind of it cold upon his skin. It sounded like a sword.

This is a minor work of Kuttner. Boyce is never really fleshed out as a character, most his time being spent simply struggling to understand just what the heck happened to him and what is going on around him. I found myself as confused as Boyce several times. There are sloppy historical errors that jump from the page.

That said, Kuttner and Moore were two of the true greats of sci-fi and fantasy. Whomever really wrote the story did a tremendous job of making the timeless dimension it unfolds in feel utterly alien. There’s a wonderfully weird dreaminess to Boyce’s sojourn in the City. The fact that the real plot of the story is not what Boyce or the Crusaders think it is is a clever bit of misdirection and is done skillfully. Did I say Kuttner and Moore were great? Because they were.

If you haven’t read much Kuttner (or Moore), and you were tempted by my review of Under a Dim Blue Sun to pick this book up, then do so. Even minor Kuttner is worth a little bit of your time.