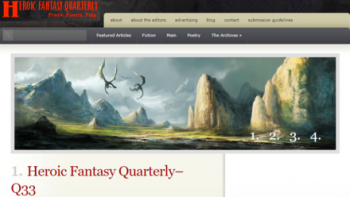 With summer’s end in sight, I’m back with another short story roundup. For those paying attention, you probably noticed I’m calling this the August roundup instead of the July one. That’s because there’s so much stuff I have to pick and choose from (and more coming soon – see this post at Howard Andrew Jones’ site), I can’t always get to it in a timely manner. From now on, each roundup will focus on whatever new short stories I’ve managed to read since the previous one. It’s a minor thing, but there it is.

Heroic Fantasy Quarterly, produced under the expert guidance of Adrian Simmons and company, continues to be the fieriest star in the S&S heavens. #33 contains not only the usual three stories and three poems, but an announcement that HFQ’s second Best of collection has been fully funded and will appear this fall. I really dug the first one and have high hopes for this one. Also, they played a fun game in this issue that I won’t describe, but it’s clever and I applaud the editors for pulling it off.

The new issue kicks off with “Between Sea and Flame” by Evan Dicken. Set in an alternate universe where Tenochtitlan fell not to Cortes, but to a strange priesthood from the sea, it’s a sequel to “Mouth of the Jaguar.” Once again, Hummingbird, refugee warrior from the fallen Mexica Empire, finds herself at the center of chaos and death. This time around she is caught between two deadly and evil forces: the Sea People who serve the terrible god Dagon, and that of the even more malevolent Destroyer. Convinced by one of the Sea People’s generals, she joins them and their allies to storm the stronghold of the Destroyer’s great follower, Pedrarias. Her decision brings her to a land already being twisted by the Destroyer’s malign aura:

If Hummingbird had any doubts about the threat posed by the Destroyer, the mountain put them to rest. Ometepe’s animals had become strange, monstrous things, twisted as if by some terrible hand. Flocks of bat-winged hummingbirds flitted around the war party, darting in to stab at the warriors with beaks barbed like fishing harpoons. If they were not crushed quickly enough, they burrowed inside the body. Many Mankeme fell shrieking down the hill, digging at their own flesh with knives and axes.

Clawed hands reached down from the tangled foliage above to pluck the heads from passing warriors. Diriangen would’ve been among them had not Hernández dragged him back at the last moment. Hummingbird joined the Mankeme in flinging javelins into the trees. What fell resembled sloths, but grown large and bloated. Their arms were thin, boneless things, little more than ropes of muscle with claws sharp as knapped flint. A warrior buried her axe in one of the things, only to have the creature burst like an overripe fruit to disgorge a swarm of fleshy mosquitos.

This is a swell story, filled with well-paced and -choreographed action. Dicken effortlessly combines elements of real history with his fictional reality, and has created a darkly wonderful world of elder terrors and bold, strong-armed adventurers.

Raphael Ordoñez’s “I Am Become Death, Destroyer of Worlds” is another sequel. Previously, in “Heart of Tashyas,” he introduced “vagabond conquistador Francisco Carvajal y Lopez,” the gold-obsessed survivor of a failed expedition. In this new tale, another set in a New World whose history doesn’t match our own, Carvajal is a very different man. Instead of the greedy and outwardly proud man, he seems genuinely contrite and penitent for his past waywardness. Riding a giant, flightless bird, he wanders the lands a flagellant in search of some way to pay for “the atrocities he had committed in his bloody search for God, gold, and glory.”

While whipping himself, he is startled when approached by two young women. The older is Pi Tigua and she makes Carvajal an offer he finds impossible to turn down:

“Sir,” said the girl with the whorls, “we beseech you to accept our hospitality tonight.” She spoke the same tongue, though stiffly.

Carvajal struck his breast. “I want no comfort! Do you hear? I want God! I want poetry! I want danger and goodness and sin!”

“But sir,” said the girl, catching his eye, already in possession of the key to his soul, “we offer you a greater danger, a greater punishment, a greater glory than you could ever inflict on yourself.”

“Come with us and find out.”

Something terrible, calling itself the Destroyer of Worlds, has been appearing in Pi Tigua’s dreams, promising to come for her and take her away for its own purposes, and leave the Earth a barren, dead place.  As can be expected from an Ordoñez story, what follows is a fusion of swords & sorcery, poetry, and mad visions. His version of the Southwest, a collision of the mythical, historical, and invented, is equally forbidding and enchanting. He is one of the truly original voices writing fantasy today, and I’m glad HFQ has provided a berth for these stories.

With plans to question and possibly (slowly) kill him, Trokarus searches for erstwhile lover, Qwayas, in Jason Carney’s “Rakefire.” Coming to a frontier town in “the ruin-haunted forest of Drossus,” she discovers her quarry has trained a young thrall in wizardry. The student, Srin Augrim, has set himself up in the wilderness. Trokarus, with the aid of a local trapper, sets out to overcome and interrogate Augrim in hopes of finding Qwayas.

Trokarus’ quest brings her up against a host of monsters, dark magics, and a mystically-protected keep. This fun blast of sorcery is clearly a setup for more tales of the hunt for Qwayas, and I’m looking forward to them.

HFQ continues to be one of the few venues for heroic poetry. “Colder Than Mars,” by Andrew Crabtree, tells of what the god Mars’ adherents can really expect from worshipping him. “The Pirate Queen Ching Shih Confronts Her Doppelganger,” by Kendall Evans, is a long, narrative tale of strange and dangerous doings aboard the titular character’s ship. Dangers appear and summon the narrator to his doom in Michael Tilbury’s “The Dolmen.” 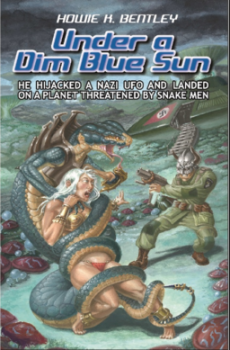 Like last time around, I have a special treat for you. DMR Books, publisher of the three Swords of Steel collections, just recently published a two-story book. The first is Henry Kuttner’s 1947 novella, “Lands of the Earthquake.” It’s been printed only twice, to my knowledge, and anybody publishing Kuttner is already a good person in my book.

For the roundup, though, the story of interest is a brand, spanking new tale by Swords of Steel alumnus, Howie Bentley. “Under a Dim Blue Sun” is a near note-perfect model of a sub-genre of pulp adventure I like to think of as “van art” stories. If you’re old enough, you might remember when it was common to see a Ford van driving down your block covered in bulging-muscled barbarians, over-inflated women, and wizards casting spells. Sometimes a dragon.

It’s fun, exciting stuff that exists to spin a ripping yarn with plenty of action and adventure and told with so much speed you couldn’t stop and ponder the illogic of it if you wanted to (which you really don’t). It makes no pretense of being something it isn’t, instead reveling in pure, pulpy goodness.

“He Hijacked A Nazi UFO And Landed On A Planet Threatened By Snake Men” is what the cover proudly proclaims and is exactly what the story gives you. Captain Erasmus O’Brien is an American Ranger dropped into wartime Germany to steal the weapon Hitler plans to use to win the war. Instead of returning to the U.S., O’Brien finds himself tunneling through hyperspace and slung across the galaxy to a world under the aforementioned dim blue sun. After landing, he immediately rescues a beautiful women from the deadly embrace of a snake man and finds himself at the heart of a war for a major city-state.

Bentley writes with total conviction and has delivered a nice blast of pulp adrenaline. Remember, we read S&S and related genres for fun, to give us a jolt in our generally mundane lives. “Under a Dim Blue Sun,” with its echoes of Burroughs, does those things splendidly. For a digest-sized book, it’s a little pricey at $13, but it is well-made and good fun.

Thanks for dropping by and remember to go out and check out these stories (and all the ones I missed). I’m glad to be back on the swords & sorcery beat. Next week, well, I’m not sure yet, but it will definitely involve some swords and more than a little sorcery.

Thanks for the review! Glad to see that the ‘clever trick’ we put together worked.

As for “Rakefire”… it was a bit of a risk, but we’re suckers for the sorcery part of S&S!