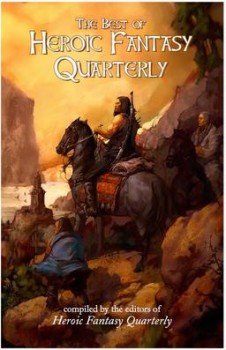 Regular readers of my monthly short story roundup know how great I think Heroic Fantasy Quarterly is, ranking it the most consistent forum for the best in contemporary swords & sorcery. Some may think I’m laying it on a little thick, but The Best of Heroic Fantasy Quarterly: Volume 1, 2009-2011, a distillation of the mag’s first three years, should prove that I’m not.

While we are living in a time when some magnificent S&S short stories are being written, most are confined to the ephemeral pages of the web. So I consider it important that Adrian Simmons, David Farney, and the rest of the HFQ crew have endeavored to preserve some of their very best in book form.

Before diving into the stories (and poems — never let it be forgotten that HFQ is one of the few places publishing heroic poetry), let me start with the cover. By the very existence of that “Volume 1” in the title you know to expect more. It implies that the editors know there’s an audience hungering for S&S right now, and that they have faith it will still be there in the future, waiting for “Volume 2.”

Then there’s the art by Justin Sweet. Eschewing either the violent moment of battle or the smoldering embers of its aftermath, we see the warrior and his companions as their adventure is about to begin. From a mountainous vantage they can survey the tower below ready to be plundered, or the prisoner within its walls rescued. Maybe it’s the squadron of ships in which they’re interested. Of course, the fact that all three seem to be looking at something just out of the frame to the left could mean the bounty hunters looking for them, or a pack of ghouls, has just broken from the forest. Whatever the specifics of the painting, for me it’s a picture from just before the events of the story. It promises there’s something coming that will get my blood pumping and transport me, if only for a dozen pages, out of the humdrum and into the extraordinary.

Some of the very best swords & sorcery possesses a rueful nature, reflecting life lived in the face of the harshness of existence and inevitability of the grave. This is on display in the book’s first story, “Man of Moldania” by Richard Marsden, a study of age and obsolescence in a fading era.

Despite his extravagant name and title, Golorus von Zekwit, member (last surviving) of the Most Catholic Order of the Claws, has reached the end of his rope. He is the last living dragon hunter in a world with few dragons left. Hoping against hope, he has spent an entire year following leads which have brought him to the small Carpathian town of Moldania. There, his wits and stratagems will be tested one last time against foes both expected and hidden.

“Leo Passimus Remembers His First Voyage,” by Danny Adams, kicks off the book’s poetry offerings with the words of a man blessed with a wife possessing “raven hair to make the night jealous” and cursed with wanderlust.

“The Black Flowers of Sevan,” by James Lecky, was the first story in the first issue of HFQ back in 2009. In a land reminiscent of the borderlands between the Islamic states and Byzantium, Tulun, a middle-aged soldier, is enthralled by the Lady Shimshal, consort of his lord, the Melik Valerian Bal of Sevan. Before the story’s through Tulun will discover how little he understands of the natures of his employer and his lady. A well-done story with the right mix of characterization, martial mayhem, and magic.

William Gerke’s “Monster in the Mountains” tells what happens when the monstrously-visaged Gowther discovers a true monster holding the people of a small farm in its slimy grip. There’s enough scene-setting, atmosphere, and mysteriousness to the hero’s inhuman appearance, to make this more than just a standard S&S monster-hunt story. I’m not sure if there are any other Gowther tales, but I hope there are.

“The Lay of Cuthred King” by Joshua Hampton is a long poem about the adventures of Cuthred King of Keenland. There is nowhere I’m aware of other than HFQ where you can read a 1200 word heroic poem.

R. Michael Burns has written four stories so far about the samurai Hokagé and his occasional companion, the shapeshifting fox, Sasa. This time, Hokagé is pitted against the Tengu King, Sōjōbo. For many nights the monster has slipped into the bedchamber of the daughter of Hokagé’s master and stolen part of her soul. Hokagé intends to climb Kanashii-yama, the Mountain of Sorrows, and defeat the vampiric creature. With a literal mountain of corpses, deities in disguise, and an, to all appearances, unwinnable battle, this is great stuff. If you want the other three stories you have only to peruse the archives of HFQ to read them.

“The Footman,” by W.E. Couvillier, poetically tells the last thoughts of a soldier dying on the battlefield, looking for the Valkyries. “Hero of Old” by John F. Keller is a delightful tale of a warrior summoned home by his mother.

“No Two Stones” by Christopher Wood is possibly the longest story, and most epic in scope, in the collection. Captain Gkurz is a soldier in the armies of vicious god Nazc Nol. They have traveled, on the backs of giant winged beasts, from their planet to the Third Moon to destroy the Loft People. As the war begins to wind down, their enemies vanquished, a sense of doubt about the future has arisen in Gkurz and his troops. This tale serves as a rejoinder to anyone who still claims expansive worldbuilding is somehow limited by the short story form.

Megan Arkenberg’s poem “What Sieglinde Serpentslayer Said to the King” reveals a warrior’s truest desires for her future.

“The Sea Wasp,” by Robert Rhodes, features Toibin, a young boy shanghaied by pirates for the good luck they perceive in his different-colored eyes. For worshippers of the Wild Ones, as are the the crew of “The Sea Wasp,” a blue eye “meant fair sailing and a green safe return.” With a corpse floating on the waves, giant monsters, and plenty of pirate talk, this is good fun.

Dariel R.A. Quiogue’s “Lord of the Brass Host” is a terrific blast of demonic automata wreaking havoc in a mock-Chinese setting. The bandit lord Orhan, the Snow Leopard arrives in the frontier city Tali in order to work a deal with the exiled Prince Sun Jian. Nothing is as simple as it seems, and plots within plots are launched from the get-go.

“And as they talked, each was already planning how to betray the other. They were princes, after all, and for them it was the way of the world.”

Realism takes a by in J.S. Bangs’ “The Last Free Bear,” as the hunter Tupiak and Reddens The Snow Beside The Kill, the bear of the title, become allies of convenience. They both seek “the twisted men” from the South who have ravaged their lands and captured the families of both. Tupiak learns that all the bears his people have ever struggled against were captured as cubs and raised by the twisted men. This is one of those stories I don’t want to write too much about. Just read it and surrender to Bangs’ story and its Arctic dreamscape setting.

“Lament for Fathers” is another long poem by Joshua Hampton. While Cuthred’s not featured, his helmet makes an appearance.

P. Djeli Clark’s “Shattering the Spear” was one of the most surprising stories in the collection. Not that it’s so good, I already know how good Clark is, but that it completely defied the expectations I had about the direction it would take after reading the first few pages. Now granted, I can be a little thick, but the ending of “Shattering” threw me for a very good loop.

Msizi is a warrior hoping to find the legendary Umkhonto we Sizwe, the Spear of the People, in order to protect his people, the Zhusa, from the armies of the Witch Priest. Again, I don’t want to reveal too much. I will add, though, that I’m a sucker for real heroics and Msizi exhibits them in abundance and Clark sells it with pitch perfect tone. And there are noble beasts, great horrible monsters, and some top-notch combat scenes delivered with great storytelling instincts.

The final story, “The Baroness Drefelin” by David Pilling, is very short and very well done. In it a lovelorn Norman knight gets good advice from a sprite about what’s perhaps a better way to live his life.

The final poem, “Gilgamesh (What The Sumerians Seem To Have Missed)” by David Sklar, adds a little bit of despair and exhaustion to the ancient original. Its last words, “Let me sleep,” seem appropriate to finish the book on as well.

Forty years ago this book would have been published by DAW, had a yellow spine, and been available in bookstores and spindle racks everywhere. It’s that good. Its stories are ones Lin Carter and Andrew Offutt might have given their eyeteeth for. Along with Jason Waltz’s Return of the Sword and Milton Davis’ two Griots collections, it’s one of the best heroic fantasy anthologies in the past ten years.

Today I would be surprised to see it on any bookstore’s shelf. Fortunately Amazon makes it easy to get in either nice, shelf-worthy paperback format or as an easy-to-store e-book. If you like true heroic fantasy you won’t, nay, cannot, go wrong with this well-turned-out collection.

Oh, and the foreword — an excellent explication of the genre and explanation of why Clark Ashton Smith’s science fiction story “The Vaults of Yoh-Vombis” counts as S&S — is by Black Gate’s very own captain, John O’Neill.

I’m waiting for my copy to arrive. Really it was the poetry that pushed it over the edge for me.

Glad to hear you liked it. If I may relate an anecdote: when we opened up for submissions for the first time we got almost 200 of them. David and I had worked through over 100 of those and found nothing we liked. I can still remember the immense relief I felt when I encountered “Man of Moldania”– which was surpassed by David calling me to say he had finally found a good story, which was “Man of Moldania”! It was good to finally find something AND good to know that our tastes overlapped.

We’ve been happy to be able to bring good S&S and adventure fiction to the world– and to re-bring these particular stories back out.

On the artwork, we got incredibly lucky to find that piece. We used Mr. Sweet’s artwork for issue zero and issue 1 so it felt appropriate to bring him back for the best-of.

Also, and I never get tired of saying this, we pay $25 for poems and that makes us one of the top poetry markets in the country!

@AdrianS – You’re welcome, but you folks have a good eye for HF. That’s great about Sweet returning for this collection. As to the poetry, that would be hilarious if it wasn’t sad about the state of poetry as an art form.