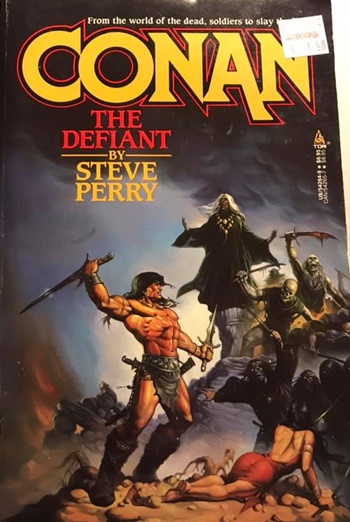 I have talked about Conan pastiches in a couple of prior Black Gate posts; and I’ve linked to them at the bottom of this one. Here’s something from one of them:

From 1982 through 2003, eight authors (though primarily four) cranked out 43 new Conan novels for Tor. At two per year, the quality varied wildly, as you can imagine. John M. Roberts’ Conan the Rogue is an homage to Dashiell Hammett’s Red Harvest and one of my favorite Conan books. Steve Perry’s Conan the Indomitable is one of the worst fantasy books I’ve ever read (even though it is a direct sequel to Perry’s Conan the Defiant, which I mostly liked.)

So, let’s take a look at those two Steve Perry books. I think that Ryan Harvey may hold Roland Green in less esteem than he does Perry, but I suspect it’s a close call. I think that Perry was the Tor author cranking out Conan books just for the money. On the whole, they’re bad, and I recommend everyone else ahead of him. Though I don’t recommend Green much, if ever. I talk about the books, and Conan writers, who I like, in the other posts below. You can see what I consider good about them. I don’t think Perry respected the character, or cared about the quality of the plot. Having said that, Conan the Defiant wasn’t too bad as a sword and sorcery paperback. Unfortunately, its follow-up was tripe.

Conan the Defiant is the second of the five novels which Perry wrote in the Tor Series. In William Galen Gray’s chronology it is the fourth Conan tale (following Conan of Venarium, “Legions of the Dead” and “The Thing in the Crypt”), and taking place before Sean Moore’s Conan the Hunter.

The young Conan comes upon a lone priest being waylaid by five bandits. Impressed with the stranger’s skill with a wooden staff, the Cimmerian wades in and helps the man dispatch his opponents. Cengh, a priest of the Suddah Oblates, is later murdered, sending Conan on a quest of justice for his short-time friend.

In typical Conan fashion, he beds Elashi, a desert-bred warrior maiden, as well as Tuanne, a beautiful zombie. Yep, a zombie. Being the irresistible stud he is, the trio engage in threesomes all along their trek to the bad guy’s castle. This one seems to rate higher than normal on the Conan adolescent fantasies scale.

Neg the Malefic is a necromancer who needs a gem called The Source of Light to raise and unleash a horde of undead minions to conquer the world. Both Conan’s and Elisha’s quests are a result of Neg’s machinations, even though the evil spell caster has no idea who they are.

There is no shortage of foes in this tale, with undead, the Men with No Eyes, Neg’s lackey, the Suddah Oblates, agents in the employ of The One With No Name, and an ensorcelled pack of spiders providing more than enough bad guys at every step of the way. With so many enemies to deal with, it is surprising how often Conan finds time to have sex with his two traveling partners.

The story, which is rather linear, works. There is enough tension throughout, with the time element constantly in play and moving things along. The final confrontation is a bit of a letdown and I had to read it a second time, as it didn’t quite make sense on the first try. It didn’t really work the second time, either. 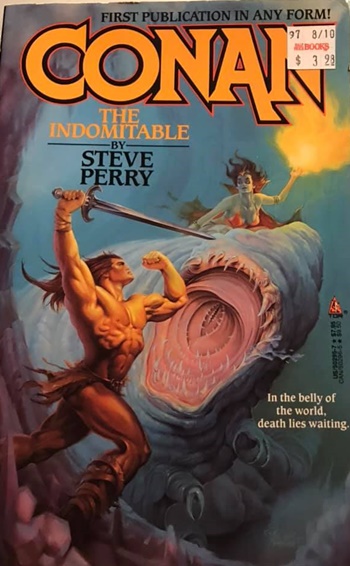 I don’t think Perry respected the character, or cared about the quality of the plot. Having said that, Conan the Defiant wasn’t too bad as a sword and sorcery paperback. Unfortunately, its follow-up was tripe.

This is the third of the five novels that Perry wrote in the Tor series. In William Galen Gray’s chronology it is the sixth Conan tale, following Sean Moore’s Conan the Hunter and taking place before Perry’s Conan the Free Lance. Since events in Indomitable directly follow those in Defiant, and include his trollop of the moment, Elashi, it’s odd that Gray inserted Conan the Hunter in between those two Perry books.

One of the protagonists has all the depth of a teenage geek’s imagination (and I was such a geek). The others don’t offer much more. And you could see the demise of one character so far ahead that there was no suspense building for when it finally happened. I forced myself to finish this book so I would be qualified to review it. It was that bad. The alliance between two of the villains’ lieutenants was the only interesting part of this story.

This is the last Conan book I would re-read. Stay away.

I thought about reading Conan the Formidable to make this a trilogy post, but I decided I’d rather watch a couple more Hallmark Christmas movies (I like them. Don’t judge me) instead. I wasn’t up to it.

I have not yet read Conan The Free-Lance, but it’s generally considered to be terrible as well.

Clock on the links below to find some recommended Conan books.

By Crom: The Tor Conan – Quality May Vary…

Cy Crom: Some Conans are More Equal Than Others…

and to think steve perry left journey to write these… yeeesh 🙂

Reading those TOR pastiches was like going to a potluck – some food you liked, some food you didn’t and some you could take or leave. I think I liked John Maddox Roberts best. I remember being very disappointed in Harry Turtledove’s contribution.
The earlier pastiches by Bantam were much better to my mind …or maybe it was just the stunning Sanjulian cover-art they had. Certainly a better stable of authors.

David – Like you, I put Maddox Roberts at the top of the group. I’m a huge fan of John Hocking’s book as well. I read one of Sean Moore’s only last year, and I was quite impressed.

I wasn’t very impressed with Turtledove’s book, either. It was the last of the Tor originals. I wrote about it here at Black Gate. Maddox Roberts wrote a better book set in Cimmeria.

The Offutt and Wagner books held up better – I agree. I talk about what I thought were some of the better pastiches are in that second link at the end of my post.

I posted a link to this essay over on a Pulp Sword & Sorcery FB group. Someone there left a comment that any Conan is a good thing, because it keeps his name ‘out there.’

I have a long finance/budget career in the public and non-profit sectors. A LOT of folks subscribe to the ‘any publicity is good publicity’ concept. I’m not one of them.

Bad publicity can be BAD publicity.

Likewise, a bad Conan book does not do good for Conan (and REH). Even just ‘good enough’ is pretty much okay with me.

I feel the same way in the Sherlock Holmes field. A bad Holmes book or TV show or movie, isn’t good for Holmes, even though it keeps the name out there.

Some brands/names, like Holmes, or Conan, or Dracula, don’t need just anything. Good is better.

I think he stated on his blog that it WAS just for the money. Same with his Star Wars novels. I think if he was not writing about his beloved Matadors, and especially if he was writing in someone else’s universe, he was just looking to pay the bills.
Another vote for Roberts as the best of the pastiche writers.

Hallmark Christmas movies (and those on Fa-la-la-la Lifetime) are one of my most favorite genres!

Gabe – I like the Hallmark Mystery movies year-round. But around Thanksgiving, I start churning through the Christmas schedule.

I watch on Roku. FRNDLY TV has the three Hallmark Channels, and UP!

That covers the Christmas flicks.

It’s just not that easy to do, is it – to take the well-worn tropes and standard devices and put them together into something that actually has a pulse. Hell, even Howard himself couldn’t do it all the time, and the stuff wasn’t well-worn and standard when he was doing it; it still had a little dew on it in 1935.

I pretty much had given up on Conan pastiches after the time of Bantam and now there are so many… I do appreciate the recommendations you have made on these posts. I read Conan and the Emerald Lotus and liked it so a few more are now in the TBR file.

thingmaker – I get it. Reading a bad pastiche is kind of depressing. I’ve got a plethora of bad ones about Sherlock Holmes.

But some of the Tors are good. And the Ace/Lancer, and Bantams have some good stories.

It’s just that quite a few of the Tors are ‘meh’ or worse. Try a few of the ones I liked and see what you think.

I like Jordan, but I know some folks don’t. Tastes vary.

But generally – bad is bad, right?

‘Someone there left a comment that any Conan is a good thing, because it keeps his name ‘out there.’ ‘

This type of beggarly attitude is what got us to where we are. Somehow, Conan/REH always needs ‘help’ of some sort. They simply can’t make it out there on their own.

It’s too bad that Tolkien didn’t have such help. THE LORD OF THE RINGS might’ve been a success if only someone had heavily edited LotR amd also written a lot of pastiches about Frodo & Co. Just imagine what might’ve been!