I like to talk about SF and fantasy series here, and last week I dashed off a quick article about a 9-volume space opera that caught my eye, Lisanne Norman’s Sholan Alliance. The first two commenters, R.K. Robinson and Joe H, both compared her novels to the queen of modern space opera, C.J. Cherryh. That certainly got me thinking. Like Norman, Cherryh is published by DAW, and as I said last week,

For many years DAW’s bread and butter has been extended midlist SF and fantasy series that thrive chiefly by word of mouth… You won’t connect with them all of course, but when you find one you like they offer a literary feast like no other — a long, satisfying adventure series you can get lost in for months.

More than any other writer, Cherryh may be responsible for DAW’s success with space opera. She’s been associated with the publisher for over four decades, since her first two novels, Gate of Ivrel and Brothers of Earth, were purchased by founder Donald A. Wollheim in 1975. Cherryh has produced many of DAW’s top-selling series, including the popular Chanur novels, the Company War (including the Hugo Award-winning Downbelow Station), The Faded Sun trilogy, and especially the 19-volume Foreigner space opera, perhaps the most ambitious and epic first contact saga ever written.

C.J. Cherryh became a SFWA Grand Master in 2016, and the Foreigner books are perhaps her most celebrated achievement. The first, Foreigner, was published in 1994, and has remained in print for the last 25 years; the most recent, Emergence, arrived in hardcover last year, and was reprinted in paperback less than four weeks ago. Four of the books were shortlisted for the Locus Award for Best Science Fiction Novel, and all 19 titles remain in print today.

If you’re truly on the hunt for “a long, satisfying adventure series you can get lost in for months,” Foreigner — all 7,200 pages of it — may be the most important literary discovery you ever make. 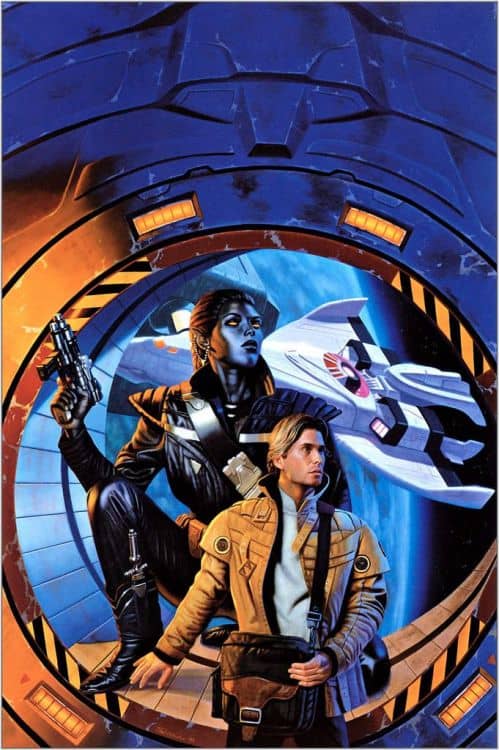 Over the last quarter century there’s been plenty written about Foreigner, and Wikipedia has a compact summary of all seven trilogy arcs. One of the best pieces of fan writing I’ve found on the series is Jo Walton’s C. J. Cherryh Reread at Tor.com, which covers the first eleven volumes in loving detail. Here’s a fine overview from the first article, Aliens and Power: C. J. Cherryh’s Atevi Books.

The basic premise is that at the very beginning of Foreigner a human ship, on its way to build a space station at a new star, fell out of hyperspace in the wrong universe. Instead they built their station in orbit around a planet of alien atevi; much follows. The books explore the relationship between humans and atevi, and between the humans on the planet and the humans on the ship. They are written (apart from the historical prologue) from the point of view of Bren Cameron the paidhi, the one human who speaks the Atevi language fluently and whose job it is to mediate between species.

Bren starts off as a typical Cherryh hero, young, helpless and out of his depth. One of the joys of the series is seeing him develop agency and competence.

The atevi are wonderful. They have deep black skin and are a head-and-shoulders taller than humans. When the humans got to the planet, the atevi were at steam-engine technology. Their basic psychology is very different from ours. Their language is very difficult. All the same, humans got on very well with them and unwittingly provoked a war through misunderstandings. The humans lost, and ever since, they’ve been living on an island and slowly handing over their technology at a rate that won’t destabilise the atevi society or destroy their environment. They don’t understand the word “like” except as expressing a preference for one food over another. Their emotions are real and strong and differently wired.

You know how people complain about SF worlds that only have one texture — the desert world, the world where all the aliens think alike? These are the antidote to that. The atevi have ethnicities and regional differences and priorities, they are hierarchical in the way they follow leaders, their superstitions and expectations are alien but consistent, and their planet feels like a planet with real history and geography. It’s fractal the way real things are. Nothing is neatly edged.

Cherryh’s real achievement here is the way she puts this over slowly. It’s an immersion course in living with atevi. 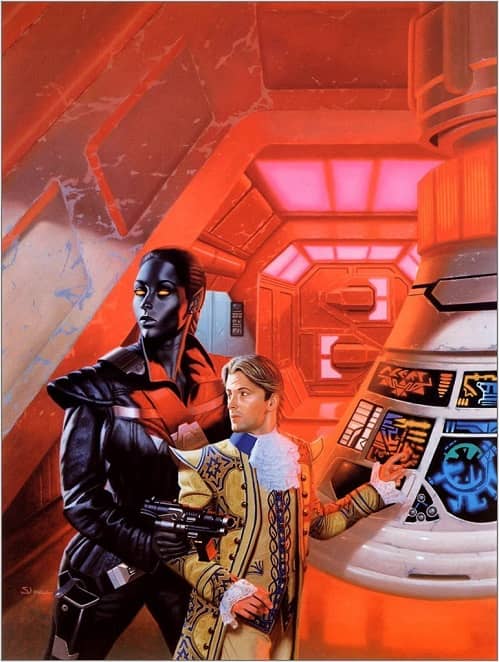 There isn’t a lot of short fiction set in the Foreigner universe, although Cherryh did self-publish two ebook short prequels to the series, “Deliberations” (in October 2012) and “Invitations” (August 2013).

One of the things I admire about the series is the wonderful cover art. Michael Whelan did the first two covers, and returned for volumes 6 and 7 (Explorer and Destroyer). Dorian Vallejo contributed one very fine cover (Inheritor), Stephen Youll two (Precursor and Defender), and the last two artists to grace the series should both be familiar to Black Gate readers: Donato Giancola (Pretender, Deliverer), and Todd Lockwood, who has executed all the covers since volume 10 (Conspirator).

Todd is a terrific artist, and his Foreigner art is colorful and eye-catching. I especially appreciate his effort to gradually (and gracefully) age Bren Cameron over the course of the last nine covers. 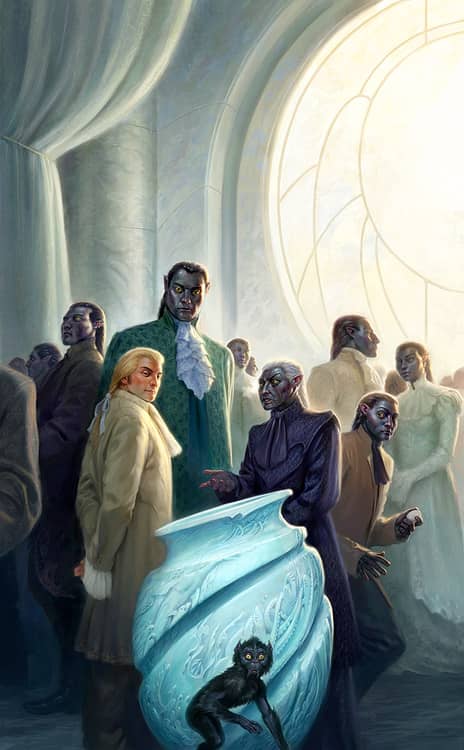 Although 19 volumes can be more than a little daunting, Foreigner is not a series of cliffhangers that constantly demand you shell out for the next book. It is structured as a series of trilogies that each come to a satisfactory close. However, as Walton points out, this isn’t a series that’s easy to jump into anywhere you like.

This is an open series, by which I mean that each volume is relatively self-contained but leads on to the next. You never get half a book, but they are all part of the same thing. They also fall into trilogies, which means that every third book has even more of the conclusion nature — that’s true of the first six anyway. What they tend to do more than conclude is open up at the ends, which works pretty well for being satisfying. However, it would be a terrible idea to start reading them anywhere but in the beginning. They occasionally make a faint concession to catching you up, but really it’s not much more than a reminder. You need to read these books in order and from the beginning, and that means starting with Foreigner.

A space opera series of this level of depth and complexity isn’t for everyone. But if you’re looking for a sophisticated SF epic you can really sink your teeth into, I urge you to give Foreigner a try.

And if you find you enjoy CJ Cherryh, there’s plenty more for you to discover. Our previous coverage of her huge body of work includes:

See all our coverage of the best SF and fantasy series here.

Cherryh is one of my all-time favorite authors but I admit I’ve never actually read any of the Foreigner books. Someday I suppose I’ll have to just sit down and read the first trilogy, at least — 19 books is kind of intimidating.

I’ve considered this… series? extended series? whole bunch’a… more than once, and found it’s size and complexity daunting. I suppose if I didn’t have a Very Large TBR pile, I might put my toe in, but as it stands, I’ll leave well enough alone.

Joe, RK — I hear you, and you’re not alone. The sheer scale of this series scares off a lot of readers, I think. I don’t have the last seven (eight?) books, either.

But this isn’t a series you have to tackle all at once. The first three novels (Foreigner, Invader, Inheritor) form a solid standalone trilogy. I can’t do anything about your TBR pile. But if you’re looking for an old-school space adventure with a fine reputation for satisfying readers and bringing them back, you might want to make room on the pile for at least one more book.

So Todd Lockwood has done the covers for many of the later ones in the series, and he reads each book for finding the scene he wants for the cover. However, he often jokes with CJ that there is a lot of tea drinking in her books, so for the cover of Tracker, he asked if he could just make a cover of her (CJ is the alien) and him having tea. And so he did.

I second Mr. O’Neill’s recommendation of at least the first Foreigner trilogy. Ms. Cherryh has been fairly careful to keep her story arcs within the 3-book groups that compose her long narrative.

And thank you, Mr. Taylor, for sharing that amazing story behind the cover of Tracker I look forward to examining the illustration closely, when I reach that volume. (Alas, I am still back at Conspirator.)

Ironically, I’ll probably end up reading something close to 19 Cherryh books this spring, but they’ll all be Alliance/Union, and mostly rereads.

(But I’m now about 2/3 of the way through Downbelow Station, and if that isn’t the BEST book I’ve ever read, it’s probably in the top 5. So I regret nothing.)

I know that I’ll be SO WRONG with this, but my memory is that nothing happens other than talking inside and drinking tea. I was really excited when my wife gave me the first one for my birthday. CJ Cherryh! Whelan cover! Exploring an alien world….. oh.

@Barsoomia — As I said, I haven’t read the Foreigner books; but if there’s one author who could write an entire book of talking inside and drinking tea, and yet make it almost unbearably tense and absolutely compelling, it’s Cherryh.

Joe H – yout’re probably right about that. Maybe I should give them a second kick, and I do reread things anyways…

This does look like a fascinating project to undertake as a reader. Love the comments and useful tips about breaking the series up.