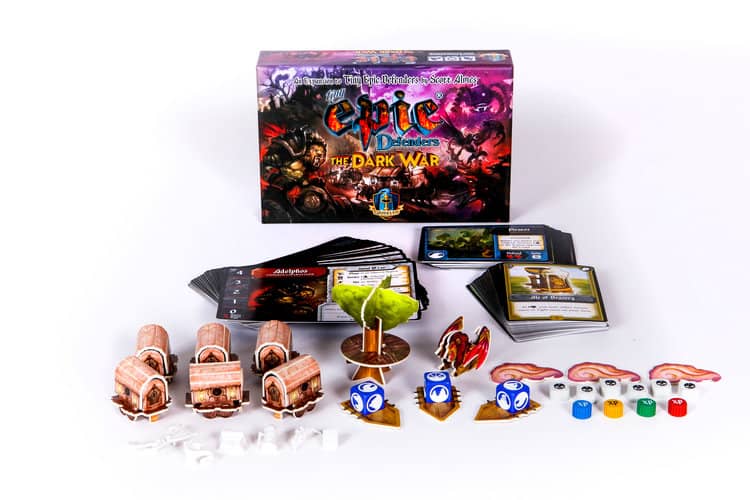 Funny how some of us predicted video games would virtually wipe out RPGs and board games, and yet here we are. We have entered a golden age of tabletop gaming. So many new games, with great graphics, great playing pieces, and game mechanics that expand on systems that have been tried, tested, and improved on for decades.

I’m certainly not the first to make this observation, but much of this game renaissance must be thanks to funding platforms like Kickstarter. No longer limited to what a few big corporations deemed were mass-marketable enough to release to retail outlets, we could now team up with a few hundred or a few thousand other people who wanted what we did and JUST PAY TO MAKE IT HAPPEN OURSELVES.

Also, tabletop games, for families, have become a welcome alternative to everyone having their heads planted on a screen in their own little world-shells. A way to gather the family collectively around a table again to interact face to face. But for online-game-savvy kids, old chestnuts like Sorry aren’t necessarily going to cut it (no knock on Sorry; I played the heck out of that game when I was about 6).

Just consider: We live at a time when the original TSR game Dungeon! has made a big comeback – a perfect starting point to introduce young players to the wonders that await with a flat surface, a few dice, and a little bit of imagination. And beyond Dungeon!, there are now dozens of games that have picked up where that 1970s oldie-but-goody left off. 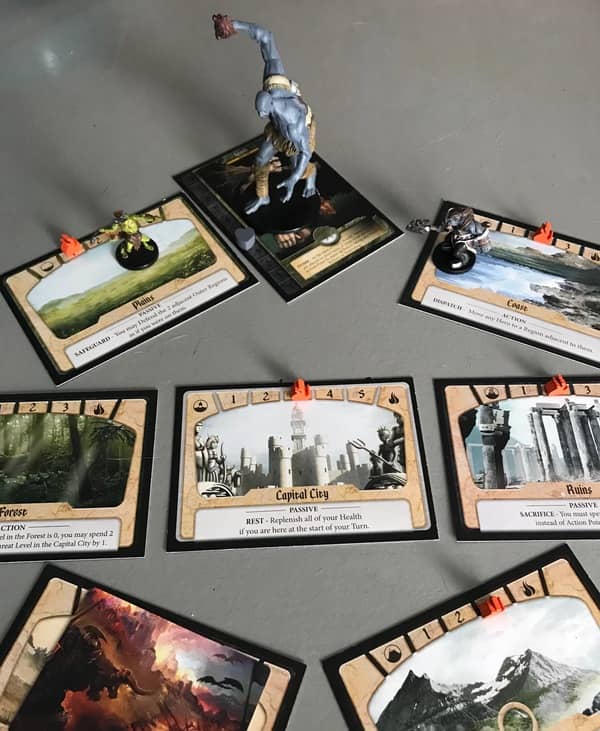 I decided to try out one of the new generation of Kickstarter-funded games with my kids. I was looking at the Tiny Epic line from Gamelyn Games, with their playing pieces referred to as Meeples. Since they funded their first — Tiny Epic Kingdoms — on Kickstarter just six years ago, they now offer 10 “small-box” games covering fantasy, sci-fi, western, mech, and zombies (something for everybody, unless you want to play one based on accounting).

I wanted to stick with fantasy, and after exploring the options I went with Tiny Epic Defenders. Simple reason: Whereas the other offerings are all player vs. player, this one is a cooperative game, with everyone working to defend the Capital City and, eventually, defeat the Epic Foe. I like cooperative games. They tend not to lead to real-life sibling fighting and one child stomping off to his/her room leaving the game unfinished. But that’s just my house.

And, after further consideration, I decided to test the waters with an original first edition, which I ordered brand new on eBay. Designed by Scott Almes, it debuted in 2015. They released a revised second edition just two years later (and having read some reviews, it sounds like there are enough tweaks to make the second edition worth getting).

I like the artwork on the player and enemy cards – reminiscent of old-school TSR, like the paintings of Erol Otus. The playing pieces are wooden, including hearts to mark your health and little fires to mark how much damage an Outer Region has taken. The artwork on the new edition looks even better (and more contemporary). The rules were pretty easy to digest. It’s a simple game to learn, but it is challenging to win.

I unpacked the tiny box, quickly read the rules, and got down to a solitaire game. I had my butt handed to me. My son and I have played it three times and won once. So, I’m 1 for 4. Like I said, it can be a bit challenging to win. There is definitely strategy involved, but the randomness introduced by card order in the turn deck can tilt the game noticeably in your or your enemies’ favor.

Based on these initial plays, having more players is definitely advantageous. Although the rules provide more action points to each player when there are less than four, you have six Outer Regions to defend and you do the math. In a solo game, sure, you can move around more, but you can still be just one place at once. With two players you’re only defending a third of the regions (less if one of the players has to go back to the Capital City to restore Health Points). I’ll have to try it solitaire again now that I’m more acclimated to the game mechanics, but I’m guessing it’s nearly impossible to defeat the Epic Foe solo (that’s using the Easy rules, never mind playing by the Medium or Epic rules, which introduce more Dire Enemies into the deck).

It is, however, a very fun game. My son and I are enjoying it, and I think when I get my daughter on board she’ll get a kick out of it too. From online reviews, other offerings from Gamelyn in this line are even more celebrated. I’ll almost certainly be checking out others – probably Tiny Epic Quests next.

Game time is about 30 minutes (perfect to squeeze in before the kids’ bedtime). One last comment regarding playing with the kids: All the Gamelyn games list Age level as 14 and up. That would put it on par with some of the more complex war games! This is very misleading: My 7-year-old son had the basic concept down in seconds flat. It is really easy to learn, although the strategy involved to beat the Epic Foes makes it appealing to older players like me.

Tiny Epic Defenders Deluxe Second Edition is available from Gamelyn Games for $30. The first edition can be found new online generally for about $20-25.

I’ve tried Epic Kingdoms and Epic Quest. Both are fun enough games. But you never feel like they are going to be at the top of someone’s favorite list. The art for Tiny Epic Quest won be over.

The first edition of Epic Defenders always gets listed as the worst of the series, but i read that they made a lot of improvements with the second edition.

I would argue that kickstarter has helped hobby gaming along but I don’t think its the main factor that has boosted the hobby along.

Kickstarter certainly helped some small publishers become large in the hobby market. Like Cool Mini or Not.

[…] (Black Gate): Funny how some of us predicted video games would virtually wipe out RPGs and board games, and yet […]