There haven’t been many times when it’s better to be a science fiction fan than right now. Big-budget SF is king at the box office and on the small screen, the shelves are groaning with new releases, and truly exciting new authors are appearing every year. But there are a few things I still miss. The humble paperback original (PBO) has become less and less common as more and more top-tier SF appears first in hardcover or trade paperback, and much of it never sees a mass market paperback reprint at all.

I like hardcovers just fine, but it was paperbacks that introduced me to SF, and it’s paperbacks — compact, accessible, and cheap — that still draw in young and casual readers and gradually turn them into fans. More publishers have been turning their backs on paperbacks, and the result is our field has less to offer curious young readers browsing the SF shelves for affordable and enticing titles. And thus, fewer young fans discovering science fiction at all.

But it wasn’t just paperbacks that made me a lifetime science fiction fan in my teens — it was great science fiction series, like Frank Herbert’s Dune, Asimov’s Foundation, Farmer’s Riverworld, Fred Pohl’s Heechee Saga, David Brin’s Uplift Saga, H. Beam Piper’s Fuzzy novels, and many, many more. DAW is one of few publishers willing to make a significant investment in PBO series, and it’s paid off well for them over the years, with now-established writers like C. J. Cherryh (the Alliance-Union Universe and the long-running Foreigner series), Julie E. Czerneda (the Trade Pact Universe), Gini Koch (the Kitty Katt novels), Jacey Bedford (Psi-Tech), and many others.

For many years DAW’s bread and butter has been extended midlist SF and fantasy series that thrive chiefly by word of mouth. I’m frequently drawn to them just by the sheer number of volumes. You won’t connect with them all of course, but when you find one you like they offer a literary feast like no other — a long, satisfying adventure series you can get lost in for months.

Lisanne Norman’s Sholan Alliance is a perfect example. It only recently caught my attention, after decades of patiently waiting on the shelves. It began with Turning Point way back in 1993, and recently wrapped up with the ninth volume, Circle’s End, in 2017. In between it quietly gathered a lot of accolades. B&N Explorations called it “fast-paced adventure… [with] more alien species than the Star Wars cantina!” And SF Chronicle labeled it “big, sprawling, convoluted… sure to appeal to fans of C.J. Cherryh and others who have made space adventure their territory.” 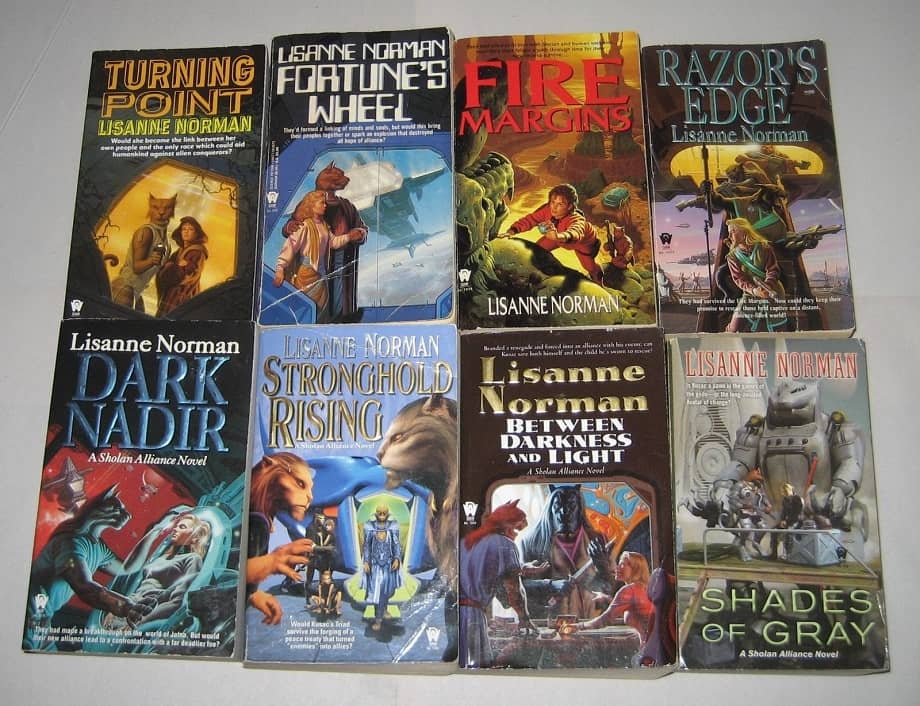 The Sholan Alliance books promise exactly what I’m looking for in a PBO space opera: a vast, colorful setting with many strange races and alien cultures, multiple jump-on points, and a good mix of adventure and humor. (Starlog Magazine praised her light touch, saying “Lisanne Norman handles her material superbly — knowing just when to ease up on drama and go for humor.”)

Best of all, at nine volumes this is a veritable banquet, some 5,000+ pages of convoluted, overlapping storylines. When SF does it right, there’s nothing more satisfying.

DAW isn’t the only publishers still willing to take a chance on paperbacks. That list includes some familiar names (Ace, Baen, Tor) and a handful of newcomers (Angry Robot, Solaris). But for long-running epic space opera, it often seems that no one does it better. I’m happy to support them, and that’s exactly what I did last month by picking up several books in the Sholan Alliance series. Not sure which one I’ll start with, but I’ll figure it out.

See all our recent cover of the best in SF and fantasy series here.

Anybody else out there with a recent and long-running SF series to recommend? I’m very open to suggestions at the moment. Shout out in the comments.

The covers immediately made me think Cherryh’s Chanur novels, and you list them in your article. I’ve enjoyed those of them (first 2) that I’ve read. These look good enough that I bought the set on eBay. When I read them, however, will be another thing, but I’ll have them on the shelf.

Well, speaking of Cherryh, she just published Alliance Rising (cowritten with her wife Jane Fancher), her first new Alliance/Union novel since Regenesis in 2009 or so.

So as for me, personally, I’m starting 2019 with a great big Alliance/Union reread — started with Alliance Rising (because it’s chronologically the earliest), will follow with Heavy Time/Hellburner, then Downbelow Station, Merchanter’s Luck, 40,000 in Gehenna, the Chanur books …

the price of the ebooks are so weirdly priced, i never get that… but i might check out the first, only 3 bucks!

Did you try it? What did you think?