God bless DAW for being willing to experiment. They published Jacey Bedford’s debut space opera novel Empire of Dust in paperback in 2014, and it has done well enough to spawn two additional volumes: Crossways (2015) and the upcoming Nimbus. [Bedford has also launched the Rowankind fantasy series that currently stands at two novels: Winterwood (2016) and Silverwolf (2017).] I hope all their experiments work out so well for them.

When I consider how to describe it, the first word that comes to mind is “old-fashioned”: there is little to say this space opera novel could not have been published two decades ago, or even three… Bedford is not writing innovative space opera, but rather the space opera of nostalgia. There is, here, something that reminds me vaguely of James H. Schmitz: not just the psionics but a certain briskness of writing style and the appeal of the protagonists, and the way in which Bedford’s vision of the societies of a human future feels at least two steps behind where we are today. This is a vision of a very Western future, and one where it’s unremarkable for a married woman to bear her husband’s name; where the ecological ethics of colonising “empty” planets don’t rate a paragraph, and religious separatists can set out to found a colony on the tools of 19th century settlers: oxen and wagons, historic crafts and manly men whose wives will follow them on the next boat.

There are plenty of other reviewers who’ve been captivated. SF Signal called it “A new space opera series that delivers the goods,” and Publishers Weekly said “Readers who crave high adventure and tense plots will enjoy this voyage into the future.”

Here’s the description for Empire of Dust.

To combat manipulative megacorporations with telepathic technology, two heroes must rebel, overthrowing the enemy’s oppressive influence in the first book in this exciting sci-fi adventure

Mega corporations, more powerful than any one planetary government, use their agents to race each other for resources across the galaxy. The agents, or psi-techs, are implanted with telepath technology. The psi-techs are bound to the mega-corps — that is, if they want to retain their sanity.

Cara Carlinni is an impossible thing – a runaway psi-tech. She knows Alphacorp can find its implant-augmented telepaths, anywhere, anytime, mind-to-mind. So even though it’s driving her half-crazy, she’s powered down and has been surviving on tranqs and willpower. So far, so good. It’s been almost a year, and her mind is still her own.

She’s on the run from Ari van Blaiden, a powerful executive, after discovering massive corruption in Alphacorp. Cara barely escapes his forces, yet again, on a backwater planet, and gets out just in time due to the help of straight-laced Ben Benjamin, a psi-tech Navigator for Alphacorp’s biggest company rival.

Cara and Ben struggle to survive a star-spanning manhunt, black-ops raids, and fleets of resource-hungry raiders. Betrayal follows betrayal, and friends become enemies. Suddenly the most important skill is knowing whom to trust.

To combat manipulative megacorporations with telepathic technology, two heroes must rebel, overthrowing the enemy’s oppressive influence in the second book in this exciting sci-fi adventure

So they better not get caught.

These are the people who defied the megacorporations and saved a colony by selling the platinum mining rights and relocating ten thousand colonists somewhere safe, and they’re not saying where that is.

They take refuge on crimelord-run Crossways Station with the remnants of their team of renegade psi-techs and the Solar Wind, their state-of-the-art jump-drive ship. They’ve made a promise to find a missing space ark with thirty thousand settlers aboard. But to do that, Ben and Cara have to confront old enemies.

Alphacorp and the Trust: separately they are dangerous, united they are unstoppable. They want to silence Ben and Cara more than they want to upstage each other. If they have to get rid of Crossways in order to do it, they can live with that. In fact, this might be the excuse they’ve been looking for….

And while we’re at it. here’s a peek at Winterwood, the opening volume in the fantasy Rowankind series. 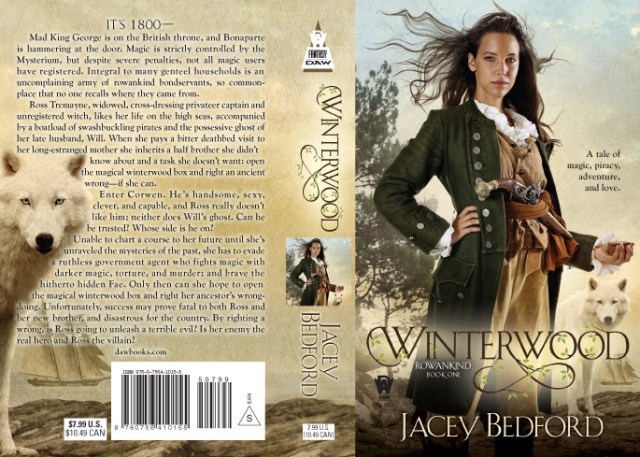 Here’s the publishing details for the Psi-Tech series. All three books are published by DAW, priced at $7.99 for both the paperback and digital editions.

The three covers are by Stephan Martiniere.

See all our coverage of the best series Fantasy & SF here.