Issue 63 of Swords and Sorcery opens with a story set in the waning days of the twelve Etruscan cities and the waxing of Rome. “For the Light” by Gustavo Bondoni is a fairly original work, using a setting rarely seen in heroic fantasy. The Etruscans trust their fate to the god whose representative wins a consecrated chariot race. If Mania, goddess of death, wins, she has promised to raise an army of walking corpses. To prevent this abomination, Semni Apatru has secretly entered the race with a plan to take out Mania’s contestant. The story jumps back and forth in time, beginning and ending with the chariots speeding along the race route. Where Bondoni succeeds most, making this story memorable, is with his depiction of the Etruscans as an alien culture that’s distinctly different from our own.

In “Witch Hunter” by Dale T. Phillips, Malleus, the titular character, has arrived at a small tavern in search of a mysterious evil power. When he approaches the barmaid, Teeann, for help, we learn that she’s a witch and that he’s one of the “good” witch finders. As he tells her:

“I do not punish innocent villagers who stand unjustly indicted of witchcraft because of the spoiling of their neighbors’ milk. Nor do I pursue midwives and potion-makers who provide relief to the townsfolk. I hunt only the ones who work to the genuine harm of others. Yes, there are places where the ignorant accuse women because of superstition and fear, but that is not my office. You and I both know that there are those of your kind who use their powers in evil ways, and that leaves a trace. When I find evidence of that, then I strike.”

Somebody who seeks to work genuine harm to others has been killing people in the story’s never-named kingdom. Eventually, an accord is reached between Malleus and the greater body of good witches, leading to a showdown with the malignancy savaging the land. While solidly written, there’s little characterization or tension to this short tale. 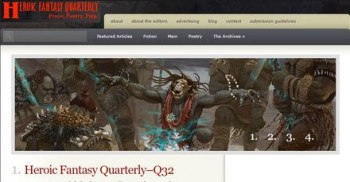 As is characteristic of the magazine, Heroic Fantasy Quarterly #32 kicks things off with very cool banner art. Called “Orc Shaman,” it’s by Mark Molchan, and depicts exactly what it says.

“The Deaths of All We Are,” by Liz Colter, retells the legend of Ywain and the Lady of the Fountain. In the original tale, Sir Ywain hopes to challenge the black knight who humiliated his friend, Sir Kynon, and who defends a magical fountain. He meets a mysterious maiden named Luned who helps him defeat the black knight and marry his widow, the Countess of the Fountain. There is more to the story, but that’s as far as it parallels Colter’s version.

“The Deaths of All We Are” twists and mutates the elements of the legend, making Luned the narrator, and her relationship to the fountain central to the retelling. Here, the fountain has become deeply linked to the Earth, and there are constant references to the Great Mother, which I assume is your standard mother-goddess. In the end, the story seems to return its beginning, with a new black knight ready to appear on the scene.

I found Luned’s accounting of events cold and distant. She’s even called “a strange and distant girl.” Major events, including a sudden change in Luned’s fortunes, take place offstage, creating a further remoteness between the story and the reader. If Luned can remain unmoved by events, it’s even easier for the reader. And, yet, there’s something niggling me about this one that leaves me unable to dismiss it.

In “Seraph,” by Ian McHugh, strange metal chimeras provide magical protection over, and serve as guardians of, fortified towns. During the harsh winter months of the story’s Russian-type setting, they keep the fortresses, where most people seem to live, warm and secure.

The seraph, too, was a thing of the old world, of Before. Their seraph should not have been in the chamber, this day. She should have been out basking in the spring sunshine, or taking gliding leaps over the castle walls, her dozen wings outstretched. But there was no spring sun, and the seraph hadn’t moved.

Her brass flanks rose and fell with each slow breath, her wings furled tightly along the curve of her spine. The seraph’s long crocodile muzzle rested on her front paws, the bladed end of her whip tail spread in front of her snout like a fan. It seemed to Galya that the seraph’s glow was duller than it should be, her long breaths – perhaps – a little laboured. Beside her on the dais, the seraph’s dish of coal bricks appeared untouched.

When the seraph of Galya’s keep begins to fail, her protective magics weaken and another machine-creature begins to threaten the land with intolerable cold. Weak as it is, the seraph, aided by the town’s soldiers, must face off against the other creature.

“Seraph” has a lot going for it, perhaps too much. I was so busy trying to keep all the elements of the setting straight, I sometimes lost track of what was at stake for the story’s characters. Still, there are some ace sequences on hand here, particularly the confrontation between the seraph and the strange invader. 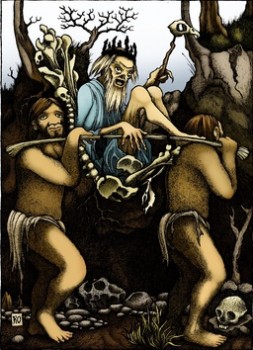 Mark Silcox’s “The Enemy’s True Name” is a dark tale of a retired warrior summoned back for one more battle. We never learn his true name, only the appellations he’s gone by (and rejects as silly): Man-blade, Skull-breaker, and Bog-bane. As with many such stories, after a lifetime of killing, he has retired to have a family and a simple, non-violent life. In his case, he’s become a herdsman.

The Blue Shrine, which he once served, has been destroyed by one of its own. Horribly burned by faulty magics, a young Blue Mage found himself in possession of terrible new powers. Now called the Bone King, he’s used his new powers to raise up an army of the shrine’s enemies, the Bog Men, and invade the lands of the Shrine.

Once our hero agrees to help the three surviving Blue Mages, they begin a journey into the dark heart of the enemy’s realm. Strange magics, sudden death, vicious opponents impede their progress toward the foe.

Despite its somewhat familiar setup, Silcox’s story is a keeper. It does exactly what it should be doing. There’s a dankness there that lends it a terrible air I found beautifully creepy. The journey through the scabrous realm of the Bone King, and the effect of the land on the narrator and his companions, is unsettling.

The following morning, I received some enlightenment from the deep-eyed Mage. “Listen to the air for a moment, Warrior,” he said. “Do you note the blissful silence, free of birdcalls and insect whispers? And examine the pale white grasses that blow so gracefully between our tents. How could they have grown so tall and hale, without the green ichor that gives life to all plants inside of them?”

I nodded, but did not entirely discern his point. “It will be easier for us to traverse these placid fields, at any rate.”

“It will, until it ceases to be,” said the Mage with a shrug. “These are the realms of nothing else but death. Remember as you admire them that our presence here is a smear upon their dire perfection.”

As an added bonus, the story has a perfectly gruesome illustration by the multi-talented Raphael Ordoñez.

Issue #32’s final story, “Hard Crossing at Luhimov Ford,” is by Adrian Simmons. Two armies’ champions are preparing to face off in a ritualized clash. If protagonist Cawella Five-Tongues defeats Aslanuw Dragon-Skin, representing the larger army, the enemy will have to withhold enough of its forces to allow even proportions in the impending engagement. Much of the story, before it explodes in a burst of furious battle, is made up of Cawella struggling to figure out how to overcome her supposedly impervious foe while maintaining her pride.

With a Bronze Age setting, and magics linked to the waxing and waning of the moon — women champions have greater power during the moon’s waxing, while men during its waning — I was reminded of Glorantha, the original Runequest setting. That’s not a bad thing, merely at thing. Actually, a thing that I liked.

Both poems this issue were dark. The first, “Nightforest” by Andrew Stockton, ends with this marvelously ominous warning:

there are parts of minds

As there are parts of forests

In which it is foolish to tread

“The Northman’s Daughter,” by Joshua Hampton, is a merciless contemplation of killing and revenge. I liked it.

It was an interesting month, this past one, with stories that left me thinking, more than going “Wow!”. I think I will revisit some soon — “Hard Crossing” and “The Deaths of All We Are” for certain — to get a better handle on them.

So, go, find, and read both Swords and Sorcery Magazine and Heroic Fantasy Quarterly. Then let them and the authors know what you liked (and didn’t). The only way to keep heroic fantasy going is to let the creators know they’re being read.

Note: You can read all about HFQ’s Kickstarter for a new “best of” anthology here at Black Gate.

Thanks for the review, Fletcher! As always, we took some chances on the stories in issue #32, sounds like some hit with you and maybe didn’t.

@Adrian S. – Yep, but that’s one of the great things about magazines – for every story that doesn’t hook you, there’s a a good chance the next one will. Looking forward to the upcoming best of collection.

For the Light Published in Swords and Sorcery Magazine | GUSTAVO BONDONI

[…] Swords and Sorcery Magazine has published my story “For the Light”. You can read it online for free. Interestingly, it’s already been reviewed at Black Gate, so for those who want to know if it was any good before investing your time, here’s the review. […]