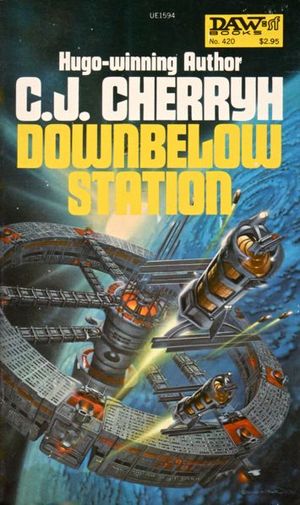 Last year, when I reviewed C.J. Cherryh’s The Pride of Chanur, Adrian Simmons mentioned he had been thwarted by her Hugo-winning Downbelow Station (1981). That led to him suggesting another go at it, but this time with the impetus of a reading group to spur him on and to discuss it. Thus the idea of the Black Gate Book Club was born. It’s taken a year to actually get around to getting this off the ground, but here we are.

For forty years, C.J. Cherryh has been a powerful voice in science fiction. Her work is noted for its “intense third person” style, where only things noticed by or of importance to the point of view character are included in the narration. Her science fiction is notable for its complex and detailed societies and its relative hardness.

Many of her books are set in the Alliance-Union universe. By the 24th century, humanity has spread to the stars. While Earth, overpopulated and culturally and economically stagnant, is ostensibly in charge of the merchant space stations and the few planetary colonies, that is not actually the case. Under the direction of a scientific elite, the planet Cyteen has declared its independence. In response, Earth has built a massive fleet of military vessels and sent them out to retake Cyteen.

Downbelow Station opens in the late days of the consequent war, when the forces of Earth are in retreat from the seemingly invincible fleets of Cyteen. Downbelow Station, a trading orbital above a planet in the Tau Ceti system, becomes the focal point of both military forces as well as a nascent third one: the independent merchants.

The plan is to read Downbelow Station over the month of June and post a discussion of it each Monday afternoon. This time around, the Book Club participants will include Adrian Simmons, Charlene Brusso, Chris Hocking, and me. We’d love it if you’d read along with us and join in the conversation.

I’m just glad to know that I’m not the only person who failed at their first try at Downbelow Station!

Ironically, Downbelow Station might’ve been the first Cherryh I read (other candidate: Pride of Chanur) and I was hooked from pretty much the word go. Looking forward to the conversation!

Looking forward to this. Third time’s a charm!

I failed at DOWNBELOW STATION and don’t think I’ll give it another try. However your review of CHANUR’S PRIDE did get me to pick up an omnibus of the first 3 in that series, and I read CP just a few weeks ago. So while you’re reading DS, I’ll move on to CHANUR’S VENTURE.

Wow – yet another failure to gain entrance to Downbelow Station. (Fletcher, you should already start getting the tee-shirts made: “I finally finished Downbelow Station and all I got was this stupid shirt.”)

It makes me wonder what everyone’s failure point was. My attempt was a loooong time ago, but I remember an immediate and forbidding density of everything – characters, “physical” information about the station, political/cultural background, etc. with no concessions made to a reader’s need to ease into complexity. I guess that’s just Cherryh’s method, and it worked for me fine in the Chanur books, but not here.

Was that the experience of all you other “failures?”

I think – it was a long time ago – I got about 40 pages in the first time, and not too far beyond that. I remember wondering why I even gave it a second try, but it was probably because it was praised by someone whose opinion I respected.

[…] Black Gate » Announcing the Black Gate Book Club: Downbelow Station by C.J. Cherryh. With all my other reading, I probably won’t be able to participate but encourage others to do so if they can. It’s an interesting idea with an excellent start (Cherryh is awesome and Downbelow is great but it took two tries for me to realize that and it isn’t the easiest thing to get into for many people). I will follow the comments, at least. (It doesn’t seem to have happened this Monday but maybe it will tomorrow or next Monday.) […]