Here at the end of the month, I’ve been amusing myself by comparing the books selected by each of the major genre sites for their monthly lists:

Andrew Liptak at The Verge, for example, seems to really dig white covers.

END_OF_DOCUMENT_TOKEN_TO_BE_REPLACED

I don’t get over to my local comic shop nearly as often as I’d like to. Fortunately, there are some great resources to let me know what I’m missing. One of the best is the B&N Sci-Fi & Fantasy Blog, which does occasional  surveys of the best new graphic novel releases. Two days ago I reported on Jeff Somers’ summary of the Best Science Fiction & Fantasy Books of August at the B&N Blog; this month I found Ross Johnson’s summary of the 29 top comics and graphic novels of the month just as fascinating.

The War of the Realms is well and truly underway, and Malekith the Dark Elf is using the chaos to his advantage. Thor takes it upon herself to unite the squabbling factions that make up the ten worlds under her command in order to strike back at Malekith and end the war. But he’s ready with an alliance of his own, and the Odinson stands in the shadows.

END_OF_DOCUMENT_TOKEN_TO_BE_REPLACED

Lots of great reading in August’s fiction magazines. In addition to those we’ve covered here during the month — including Analog, Black Static, F&SF, Graphic Classics, Heroic Fantasy Quarterly 33, and Interzone — there’s plenty more on the shelves to keep you busy in those idle hours, including all those above. Click on any of the thumbnail images to visit their respective websites.

Our additional magazine coverage in the past few weeks includes Steve Case’s interview with Scott H. Andrews, editor of Beneath Ceaseless Skies, Fletcher Vredenburgh’s August Short Story Roundup, and Apex Magazine‘s report on the Best Short Fiction Reviews. For our vintage magazine fans, we have Retro-Reviews of the November 1953 issue of Galaxy Science Fiction (by Matthew Wuertz), the November 1969 Galaxy (by Adrian Simmons), and the July 1964 Amazing Stories (Rich Horton).

END_OF_DOCUMENT_TOKEN_TO_BE_REPLACED

One of the reasons I love Angry Robot is their enthusiasm for new authors. Paired with their commitment to mass market, they’ve allowed me to take a chance on dozens of new writers over the last few years, and all for the price of a few $7.99 paperbacks. That’s a rare and precious thing these days, and it’s worth supporting.

John DeNardo tipped me off to a trio of great-looking Angry Robot paperbacks arriving September 5. Here’s all the deets.

END_OF_DOCUMENT_TOKEN_TO_BE_REPLACED 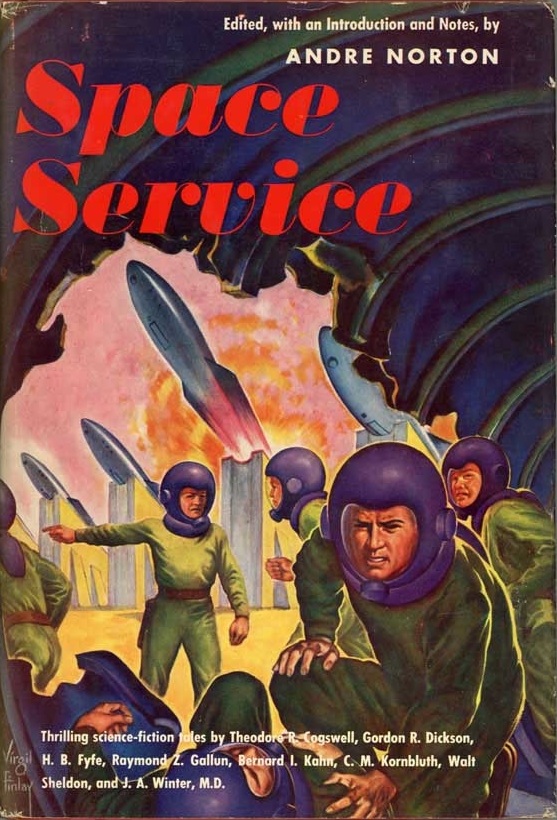 Andre Norton is one of the most revered science fiction writers of the 20th Century. True, much of her work is out of print these days, and she seems to have more or less fallen out of favor with modern readers (except Fletcher Vredenburgh, naturally), but there are still plenty of SF fans who credit her with their introduction to science fiction.

Many readers don’t know that Norton made a name for herself as an editor before she became acclaimed for her own writing. Her three SF anthologies for World Publishing Co., all published between 1953-56, remain some of her most collectible work. Party that’s due to their relative rarity, but the Vigil Finlay covers are also a big factor. These are gorgeous books, eagerly sought by collectors, especially in good condition.

Over at his website Strange at Ecbatan, Rich Horton reviews the first one, Space Service. It appeared in hardcover in 1953 and, like the other two, has never been reprinted.

END_OF_DOCUMENT_TOKEN_TO_BE_REPLACED

Over at the Barnes & Noble Sci-Fi & Fantasy Blog, Jeff Somers has compiled his own list of the top 25 science fiction and fantasy releases for the month. His list includes titles by Stephen Baxter, N.K. Jemisin, Jeff Noon, V.M. Escalada, Daniel H. Wilson, Victor Milán, Cassandra Khaw, Stina Leicht, Beth Cato, and many others. Here’s a sample.

Sometimes you want to read a space opera that makes no apologies about the “opera” part, and this is it: Spencer Ellsworth’s debut novella goes big and refuses to go home as it tells the story of a galactic civil war fought between an all-powerful empire and a Resistance force seeking a long-lost artifact that will help it shift the balance of power in the universe. Did we mention that there are giant space bugs, sun-sized spiders, and entire planets populated by cyborgs? Well then.

END_OF_DOCUMENT_TOKEN_TO_BE_REPLACED

By the western wall of Klavenport on the Sea of Autumn Mists — but you do not want a bard’s beginning to my tale, Goodmen? Well enough, I have no speak-harp to twang at all the proper times. And this is not altogether a tale for lords-in-their-halls. Though the beginning did lie in Klavenport right enough.
— from “Legacy from Sorn Fen” 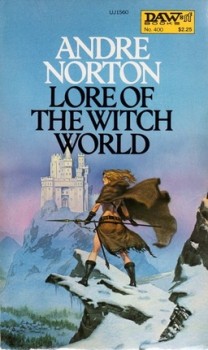 I’ve written before that Andre Norton’s Witch World books is a series I avoided for way too long. There were two things that kept me away from them over the years. The first, when I was younger, was their name: Witch World. It seemed a little too twee. When I was older there were so many other things I wanted to read that it never crossed my mind to investigate Andre Norton’s catalogue. If she ever occurred to me at all, it was as the author of Starman’s Son and several other books shelved in the children’s section at my local library. Later, I found a few scattered Norton volumes in the boxes of paperbacks my dad kept in the attic but, again, nothing prompted me to read them. At the time, the cover of “Witch World” turned me off. (Today I love the goofy looking thing.)

Not until I started contemplating blogging about swords & sorcery did I actually read anything by Andre Norton. When I started expanding my library of S&S books, there were several anthologies I finally picked up, one being Flashing Swords #2, edited by Lin Carter. I had read some of its stories before, but not Norton’s Witch World story, “The Toads of Grimmerdale.”

I was surprised by the darkness of the story. Like I said, I had assumed the Witch World stuff was light and airy and my first encounter with it was a story of revenge for rape, set in a country savaged by years of war. Well I was hooked, and I scanned my shelves for any other Witch World stories. I found “Spider Silk” in Flashing Swords #3, and “Falcon Blood” in Amazons!, edited by Jessica Amanda Salmonson. I rooted through boxes in the Vredenburgh attic and dug out my dad’s ancient copy of the first novel, Witch World, and devoured it. Its inventiveness, fast pacing, and the sheer fun of it made me an instant fan.

END_OF_DOCUMENT_TOKEN_TO_BE_REPLACED 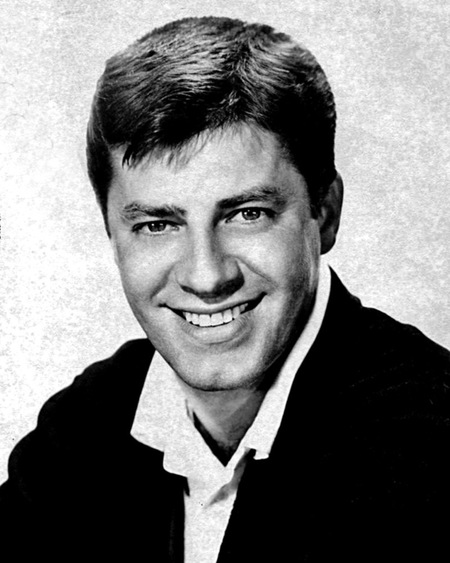 The book has finally closed on the eight decade long career of Jerry Lewis, the American actor, comedian, and filmmaker, who died on Sunday, August 20th, at the age of ninety one. Jerry Lewis is one of those colossal, divisive figures like Lenin, Mao, or Meryl Streep; few people are noncommittal about him. Ever since he shrieked and jerked his way into the public consciousness with his partner Dean Martin, first in nightclubs and on radio, then in a series of highly successful movies, and finally, after an acrimonious split with Martin, on his own as an actor and director, the standard responses have been either overboard adoration or utter loathing, a split that even effects entire nationalities — the French have a much snickered-at (at least among Americans) reputation for their extreme and almost universal love of Lewis, while Swedes and all other Scandinavians can’t stand him. (I made that last part up, but it’s probably true.)

This might be of only passing interest to Black Gate readers, except for one thing. In 1963, Lewis co-wrote (with Bill Richmond), directed, and starred in what is arguably the best version of that much-filmed classic of dark fantasy, Robert Louis Stevenson’s The Strange Case of Dr. Jekyll and Mr. Hyde. Lewis altered the title even more than most adapters do, calling his movie The Nutty Professor, and that’s not all he altered.

END_OF_DOCUMENT_TOKEN_TO_BE_REPLACED

Summer is drawing to a close and, as always, my ambitious summer reading plan is in tatters. The problem isn’t so much lack of disciple (I mean, any more than usual) as it is that great new books keep showing up every week. What’s the point of a meticulously organized plan when I end up behaving like a kid in a candy store every damn summer?

Well, the good news is that great new books keep showing up every week. We’ll have to leave it to someone vastly more organized than I to catalog them. As usual, that task falls to John DeNardo. He’s surveyed the best books of August in his regular column at Kirkus Reviews. Here’s the highlights.

END_OF_DOCUMENT_TOKEN_TO_BE_REPLACED

I’ve posted a few times about Solar Pons, whom Vincent Starrett called, “The best substitute to Sherlock Holmes known.” Since I created www.SolarPons.com and founded The Solar Pons Gazette, it’s fair to say I’m a big fan of the ˜Sherlock Holmes of Praed Street.’

August Derleth wrote seventy-something stories about his creation before passing away in 1971. Derleth’s Arkham House publishing company had printed some works by British horror author Basil Copper and Arkham editor James Turner, in response to a Pons-related letter from Copper, suggested that the British writer compile the entire Pons collection into a two-volume Omnibus. Copper did so, making some 2,000 edits to Derleth’s originals to ‘correct errors.’ Copper referred to this Omnibus as “a veritable feast for Pontine enthusiasts.”

Sure. Except that there was a major outcry from said enthusiasts at Copper’s hubris in rewriting the master’s work (reminds me of L. Sprague de Camp ‘revising’ Robert E. Howard’s original Conan writings). It seems to me that the split was never healed. Meanwhile, Turner asked Copper to continue the Pons saga. Copper wrote four collections of stories and one partially completed novel over the next few years (he would go on to release two more collections of originals and complete the novel).