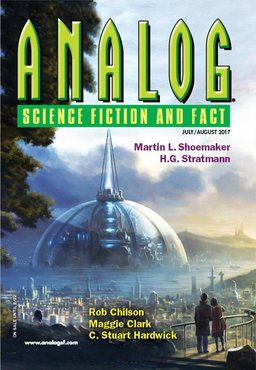 I’ve been buying Analog Science Fiction and Fact for over 40 years. Remarkably little has changed in that time. It’s still a digest magazine. It still has interior art by Vincent Di Fate. And I still read “Probability Zero” first.

The July’August issue has a big novella by Martin L. Shoemaker, “Not Far Enough,” featuring the return of Captain Nick Aames, Carver, and Smith, who’ve previously appeared in the pages of Analog in “Murder on the Aldrin Express” (September 2013), “Brigas Nunca Mais” (March 2015), and “Racing to Mars,” (September 2015, winner of the Analog Award for Best Novella of the year). Here’s editor Trevor Qachari on the issue.

We kick off our July/August issue by checking in on Captain Nick Ames and his crew, last seen in “Racing to Mars,” September 2015, by Martin Shoemaker. When a routine mission goes off the rails, it’s more than just a matter of shipboard politics: lives are at stake, and people will die if they go too far, or “Not Far Enough.”

Then we have the kind of fact article that we only pull off all too rarely: H. G. Stratmann gives us a look at the science behind Stanley Schmidt’s story in this very issue, “The Final Nail.”

We also have fiction ranging from “Across the Streaming Sea,” an adventure that perfectly embodies Clarke’s Law, by Rob Chilson; to a story of the bond between a captain and his ship in Brian Trent’s “Galleon”; a follow-up to Maggie Clark’s “Seven Ways of Looking at the Sun-Worshippers of Yul-Katan,” in “Belly Up”; and an almost-could-have-happened-this-way tale of early space travel, “For All Mankind,” from C. Stuart Hardwick.

Although Trevor says “H. G. Stratmann gives us a look at the science behind Stanley Schmidt’s story in this very issue, ‘The Final Nail,'” don’t look too hard for Stan’s story. It actually appeared last issue.

The cover this issue is by Rado Javor. Here’s the complete Table of Contents.

The Science Behind, “The Final Nail,” H.G. Stratmann

The July/August issue is on sale until August 22.

We last covered Analog with the May/June 2017 issue. See all our Analog coverage here.

Our July Magazine Rack is here. See all of our recent fantasy magazine coverage here.