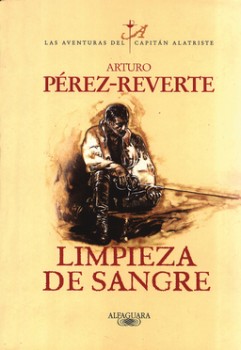 I closed out my review of Captain Alatriste last summer by stating I would be reading more of Arturo Pérez-Reverte’s series in “short order.” That did not happen. Only now, over a year later, have I plunged back into the grimy, deadly underside of Golden Age Madrid. Even more than its predecessor, Purity of Blood (1997) explores the darkest heart of imperial Spain as she, only 130 years after her emergence as the world’s leading power, is collapsing in on herself; collapsing due to endless war, unsustainable debt, corruption at all levels, and unyielding religious fanaticism. Still, Spain remains a mighty empire; if not feared, still respected in all corners, and her subjects proud:

But at the time of this tale, our monarch was still a young man, and Spain, although already corrupt, and with mortal ulcers eating her heart, maintained her appearance, all her dazzle and politesse. We were still a force to be reckoned with, and would continue to be for some time, until we bled the last soldier and last maravedi dry. Holland despised us; England feared us; the Turk was ever hovering ’round; the France of Richelieu was gritting its teeth; the Holy Father received our grave, black-clad ambassadors with caution; and all Europe trembled at the sight of our tercios — still the best infantry in the world — as if the rat-a-tat-tat of the drums came from the Devil’s own drumsticks. And I, who lived through those years, and those that came later, I swear to Your Mercies that in that century we were still what no country had ever been before.

Purity of Blood picks up shortly after Captain Alatriste, in the year 1623. Like that book, this one is narrated by Íñigo Balboa, the son of one of Alatriste’s slain comrades. Íñigo tells the story from late in life, but during its events he is thirteen. 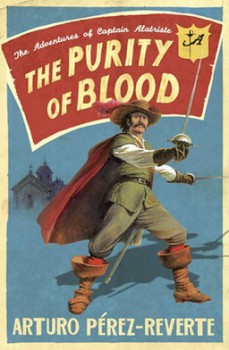 In the first novel, Alatriste, home from the war in Holland and always in need of money, hired on to waylay and beat two English diplomats (the Prince of Wales and the Duke of Buckingham). When he refused to murder them, he fell afoul of the president of the Inquisition in Spain, Father Emilio Bocanegra and his hired killer, the Sicilian, Gualterio Malatesta.

In Purity, Bocanegra, in addition to his plans to unseat the king’s right hand man, still plots revenge, unbeknownst to Alatriste, against him and his companions. A summary of the book’s plot reads like a Reformation-era Protestant screed about the horrors of Catholic priests and convents.

Alatriste’s friend, the great poet and swordsman, Francisco de Quevedo (a real, historical person), comes seeking his help one morning. Don Vincente de la Cruz, a man who aided de Quevedo in days past, wants to rescue his daughter from a convent. This particular convent is no place of contemplation and holy service, but, by all accounts, the personal brothel of the two well-connected priests who run it.

“The fact is,” he said, “that the walls of La Adoracion convent are thick enough to silence all that goes on within them: a chaplain who veils his lasciviousness beneath a hypocritical mysticism, a stupid and credulous prioress, and a congregation of unfortunate women who have been convinced that they have celestial visions or are possessed of the Devil.” The caballero ran his fingers through his beard as he spoke, and it was obvious that acting with equanimity and decorum was costing him dear. “They are even told that through love for and obedience to the chaplain they may find the way to God, and that certain intimacies and unchaste acts proposed by the spiritual director are the pathway to perfection.”

Despite the promise of a painful and protracted death if caught breaking into a convent, Alatriste agrees to help de Quevedo and his friend in the rescue attempt. The mission fails, and young Íñigo falls into the hands of the Inquisition. The latter half of Purity of Blood concerns Íñigo’s ordeal and Alatriste and de Quevedo’s efforts to rescue him. And that’s the plot. It takes up perhaps no more than one in three pages of the book. On its own it’s exciting (two particularly vicious running street battles are highlights) and filled with memorable characters and dialogue. It is Íñigo’s discursive narrative, though — presenting the hearts and souls of his mentor, their friends, and rotting Spanish society — that is the real core of the book. 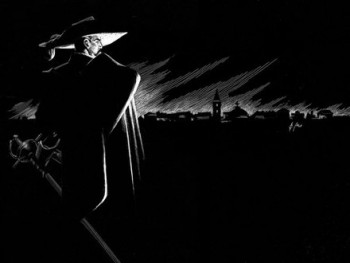 Pérez-Reverte wrote Captain Alatriste because he was shocked at the lack of information about the Golden Age in his daughter’s school history book. In less than fifty years, Spain, a country much of which had been under foreign rule for centuries, became the greatest global power. Then she lost, albeit more slowly, most of that power, if not the actual empire, sinking into poverty and backwardness. It is one of the grandest and most tragic stages to tell stories upon.

Purity of Blood’s title refers to an individual’s lack of Jewish blood. Whereas the first book’s events were centered on the ongoing conflict between faltering Spain and rising England, this book’s focus is Spain’s obsession with whose ancestors were Jewish, and rooting out any secret practitioners of the Jewish faith from all levels of society. The Inquisition is willing to stoop to any means, despite the crown’s need, to prevent Spain from turning to Portuguese bankers of Jewish heritage. Certain politicians are willing to aid the Inquisitors, even to Spain’s detriment, in order to hunt down any Jews. In pursuit of this goal, they are ready and willing to conjure up charges against good, upstanding people if it will help assure the public of their zealousness. Even the humane de Quevedo has written anti-Jewish poems, once insinuating his worst enemy, don Luis de Gongora, of possessing Jewish ancestry:

Why should Greek be a tongue you debase?

and not Hebrew? We know you master that,

it is as clear as the nose on your face.

Antisemitism and corruption gnaw at the heart of the empire, destabilizing it further, exactly when it needs to be strengthened. Through Íñigo’s words, Pérez-Reverte exposes much of the decay that undermined Spain and set it on a downward path for nearly three hundred years. Purity of Blood is a book propelled by rage and anger.

Though the story is told by Íñigo and the observations are his own, the dark and melancholy Diego Alatriste stands as its main character. He represents the Spaniard, loyal to a crown that has betrayed him and a society that has failed him. Despite a readiness to commit murder for hire, he is brave and honorable. For Pérez-Reverte he appears to symbolize the dichotomous reality that was Spain in its Golden Age: noble and corrupt, brilliant and venal, pious and ignoble. He is one of the most captivating characters, and his creator one of the most captivating writers, I’ve encountered in years.

There are five more books in the series at present, with two more planned. I know I said I’d read the next one quickly last year, but this time I mean it. The next book, The Sun Over Breda (1998) returns Alatriste to the battlefield, and I’m itching to read it as I type these last words.

I can’t say enough about these books – they were a very happy find for me several years back, and I think Purity of Blood is the best of them. Errol Flynn lives!

@Paul – Face, we’ll all die with TBR stacks piled to the skies.